Power of Inspection, Search, and Seizure under GST 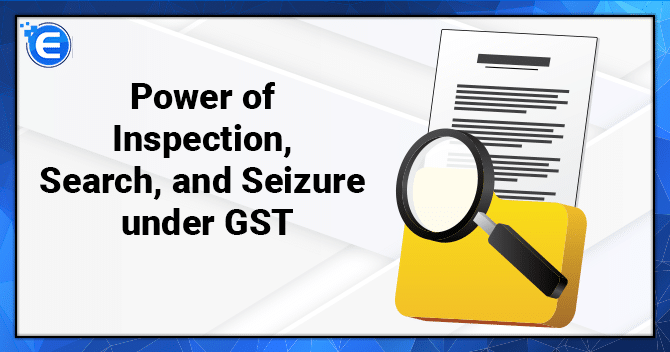 GST has been incorporated with a view to provide a simple and streamlined tax flow structure. The intention itself provides a legal backing to various section of the GST Act that allows the enforcement machinery that means tax officers, to inspect, search and seize records for ascertaining the payment of tax and prevent tax evasion. In this article, we shall look at inspection, search, and seizure under GST in detail.

What do you mean by inspection under GST?

An inspection under GST takes place when a joint commissioner or an officer of higher rank may have reasons to believe that to evade tax, a person has committed the following:

Then he may authorize an officer to inspect the place of businesses of the following:

What is “reasons to believe”?

This means having knowledge of facts that would make any reasonable person to reasonably conclude the same. According to the Indian Penal Code, a person is said to have a reason to believe a thing, in case he has sufficient reason to believe that thing but not otherwise.

This term is a determination based upon an intelligent examination as well as evaluation.  It is different from purely subjective consideration. It is based upon facts instead of the interpretation of facts.

What do you mean by Search under GST?

Search under GST refers to an attempt to find something. Search, in legal terms, means an action of the government official to go and look through or examine a place, person, object, etc., carefully to find something concealed or to discover any evidence of a crime. It may be noted that a search can only be conducted under proper and valid authority provided under law.

Who can order for search under GST, and at what time?

Based upon the inspection results or on any other reason, Joint Commissioner or a superior officer may order for search in case such officer has reasons to believe that:

On the occurrence of the above mentioned situation, such officer on his own or by an authorized officer, search as well as seize the goods and documents.

What do you mean by Seizure under GST?

This term is not specifically defined under GST. In legal terms, seizure refers to an act where something or someone is taken over by force through a legal process. For e.g., the seizure of evidence found at the crime scene. It implies taking possession forcibly against the wishes of the owner.

Seizure under GST should not be confused with detention. Detention is not allowing the owner any access to seized goods by a legal order or notice. However, the ownership as well as the goods’ possessions remains with the owner. In case of Seizure, it means taking over or actual possession of the goods from the department. A seizure can only be made after inquiry/investigation that the goods are liable to be confiscated.

What is the Procedure for Seizure under GST?

The proper officer shall issue an order of seizure in Form GST INS-02. The officer who is authorized to search, shall have the authority to seal the door of the premises. He may also break the door of any premises in case the access is denied.

In case where it is not possible to seize goods, the proper officer shall order the owner not to remove the goods without the permission of the officer. The officer may issue the prohibition order in Form GST INS-03[1].

How long can books/documents remain with the officer?

The officer may keep books/documents as long as required for examination and enquiry purposes. Books that are not relevant with the issue of notice shall be returned within 30 days.

The seized goods can be released on a provisional basis against a bond for the goods value in Form GST INS-04. The owner is also required to furnish a security as bank guarantee for the amount due.

What happens after Seizure under GST?

Once seizure under GST takes place, then:

It may be noted that the provisions of Code of Criminal Procedure shall apply to search and seizure under GST.

Bond and Security for release of the seized goods

It may be noted that seized goods can be released but on a provisional basis on the execution of a bond for the value of goods in Form GST INS -04 and on furnishing a security bank guarantee for the amount due. In case the person to whom the goods were released fails to produce goods at appointed place and date as prescribed by the officer, the security will be encashed and adjusted against tax, interest, and penalty.

Read our article: All you need to know about Accounts and Records Under GST

Where and who should apply for GST...

After the implementation of GST on 1st July 2017, there have been many people who have sought r...

Determination of Place of Supply of...

We have already discussed in our previous blog how Goods and Service Tax has introduced the Co...

Major Announcements made in 28th GS...