Prior Permission from RBI for Acquisition/ Transfer of Control in NBFC 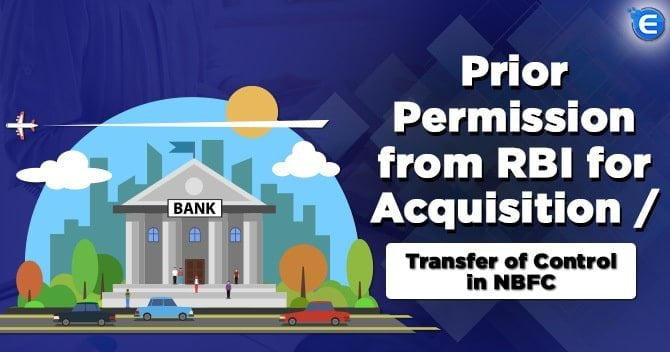 A Non-Banking Financial Company also known as an NBFC is a company that is registered under the Companies Act 2013 or previous company law 1956. An NBFC is engaged in the business of loans, advances, shares, securities, hire purchase and leasing activities. The above categories are the principal business of an NBFC. Under no circumstance can an NBFC take part in the business of conducting agricultural activities,  industrial activity, purchase or sale of any goods (other than securities), or providing any services and sale and construction of immovable property. Apart from this, one of the main business what an NBFC concentrates on is accepting and receiving deposits.

In the same circumstance, an NBFC also would require prior approval in case of an acquisition or transfer of control in the structure of the NBFC. The main regulatory authority for NBFCs is the Reserve Bank of India (RBI). The RBI brings out various notifications and circulars related to the operation of NBFCs in India. One such notification is the permission required from the RBI for acquisition or transfer of control in an NBFC.

The RBI brought out a circular in 2013-14 DNBS (PD) CC.No.376/03.10.001/2013-14 related to the acquisition and transfer of control of ownership in an NBFC. Before changing the control in an NBFC, prior permission is required from the RBI. Section 45 IA(4)(c)[1] of the Reserve Bank of India Act (RBI Act)  states that a certificate of registration can only be granted to the company on the condition that the character of the new promoters will not affect the status of the public or the interest of the depositors.

Under the 2014 circular prior permission was required for the following:

In case an NBFC has any form of acquisition or transfer of control, then compliance must be followed by the NBFC under Sections 45K and 45L of the RBI Act, 1934. Violation of these regulatory provisions would lead to strict penalties under the respective acts.

The RBI brought out a circular in 2015-16 to replace the 2014 circular on acquisition and transfer of control for an NBFC. The RBI has reviewed the previous directions on Non-Banking Financial Companies (Approval of Acquisition or Transfer of Control) Directions, 2014. In a review, the RBI decided the operation of acquisition and transfer of control in an NBFC based on recommendations based on the draft circular in March 2015. While certain recommendations were similar to the previous circular the RBI made several changes.

The following recommendations were brought out by the RBI:

Apart from the above compliances, the NBFC has to continuously report the changes in the shareholders and management to the RBI. This would also be mandatory under the Non-Banking Financial Companies Acceptance of Public Deposits (Reserve Bank) Directions, 1998.

The following procedure has to be followed by an NBFC for making an application for change in control:

Requirement of Public Notice for Acquisition of Shares

If there is any form of Acquisition of shares or change of control in the NBFC, an application must be made to the RBI regarding the same. Apart from this prior public notice is required to be given by the NBFC.

The following considerations have to be taken by an NBFC giving prior public notice:

The 2015 directions have evolved from the previous direction.  These provisions would only apply in circumstances such as change of control of the NBFC, change in ownership pattern of the NBFC, and shareholding pattern of the NBFC. These directions would also be applicable if the NBFC is selling some of its shares and it is been acquired by another NBFC. NBFCs have to strictly comply with the circulars issued by the RBI. Any form of violation in these circulars would lead to the cancellation of the Certificate of Registration of the Company.

When the notice period expires for the company, the company has to convene another board meeting to make a resolution. One of the main agendas in the resolution would be to appoint new directors and shareholders for the NBFC.

After passing the board resolution, the company has to file Form- DIR 12[2] with the registrar of companies within 30 days of the resolution. The company also has to comply with the procedures related to share transfer. After this, the valuation procedure has to be conducted by an external advisor for change in the share value. Respective stamp duties have to be paid on the shares.

Once this procedure is successful, the NBFC would have to provide an official intimation to the RBI with documents such as Registrar of Companies Forms, Form DIR 12, Board Resolutions, and resolutions related to transfer of shares of the company.

Conclusion – Prior Permission on Transfer of Control in NBFC

The companies act requires companies to take prior permission from the Registrar of companies if there is any form of change or transfer of control in the company. After taking the necessary permission, the company is allowed to implement these changes. Similarly, prior approval or permission is required from the RBI for any form of acquisition or transfer of control in an NBFC. The NBFC has to follow compliance related to the amount of share ownership change, change in the shareholders or directors of the company. After securing approval from the RBI, the NBFC has to provide public notice of the change of control. Non-compliance with the above provisions related to change of control will attract severe penalties such as cancellation of the Certificate of Registration of the NBFC.

Change in Shareholding Pattern of N...

RBI is putting strict regulations on NBFCs. Since NBFC deals with financial activities it is es...