Merger and Amalgamation under Companies Act 2013 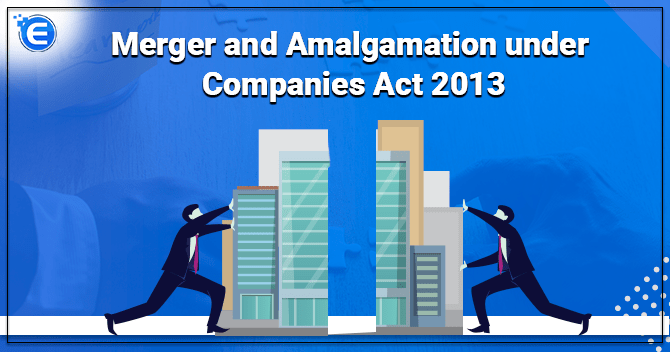 In relation to merger and acquisitions (M&A) under Companies Act, 2013 it has replaced the 1956 Act. The new Act enhanced disclosure norms, providing protection to investors and minorities thereby making M&A smooth and efficient. It helps in the overall process of acquisitions, mergers and restructuring, facilitate domestic and cross-border mergers and acquisitions. In this article we shall have a detailed overview on Merger and Amalgamation.

Under the Companies Act 2013, the concept of merger & amalgamation is fully explained whereas under Companies Act 1956, the term ‘merger’ is not defined and also under the Income Tax Act, 1961.

The merger is a combination of two or more entities into one, it is not just the accumulation of assets and liabilities of the distinct entities, but the organization of the entity into one business.

Even though substantial changes have been incorporated in the new act but still there are certain provisions which remain unchanged such as pre-condition to merger & an amalgamation of accepting scheme by three-fourths of shareholders is still a pre-condition under the new act. Central government still has the power to order merger & amalgamation in the interest of the nation. There is also an obligation to maintain records of merger & amalgamation under section 239. There are some other provisions which remain unaltered related to convening meetings, obtaining the permission of regulatory authorities and central government.

Application filed in relation to the reconstruction of the company under Section 230 for compromise & arrangement or which involves merger or amalgamation of two or more companies, have to specify the purpose of the scheme.

The following reasons can be highlighted for Merger and Amalgamation:

It is a combination of two or more businesses into a single business enterprise.

There is a transfer of an undertaking of a company into another company.

Under this, there is re-organization of share capital, varying the rights of shareholders.

Who can File Application for Merger & Amalgamation?

An application is required to be filed with Tribunal (NCLT). An application shall be made by both the transferor and the transferee company in the form of a petition to the tribunal for the purpose of sanctioning the scheme of amalgamation.

In the case where more than one company is involved then at the discretion of such companies, an application may be filed as a joint application.

But if the registered office of the Companies is in different states then, in that case, there will be two tribunals having jurisdiction hence separate petition is required to be filed.

Companies should have the power in the object clause of their Memorandum of Association for amalgamation.

Scheme of amalgamation shall be drafted for the purpose of getting it approved at a Board meeting of the company.

An Application is required to be filed with the tribunal for Merger & Amalgamation and this application will be submitted in form NCLT-1 along with the following documents:

Following Disclosure in form of the affidavit are also required:

Calling for Meeting by Tribunal

Notice of the meeting after the order of tribunal is required to be given in Form No. CAA-2.

It is required to be sent to each Creditor/Member and debenture-holders at the registered address of the company.

The notice of the meeting shall be sent by:

The notice can be sent by the following modes:

It is required to send a notice of meeting along with the Copy of Scheme of compromise & arrangement.

Following details of compromise & arrangement is required to be mentioned:

In case scheme of compromise or arrangement is related to more than one company then the details of the relationship between such companies who are parties to such scheme including holding, subsidiary or associate companies.

Explanatory Statement disclosing following details of the scheme of compromise or arrangement:

Disclosure regarding the effect of the Merger & Amalgamation on the following:

Details of availability of documents:

Details of the following documents for inspection by the members and creditors, namely-

Other Documents: Order made by the Tribunal under section 232(1) for merging companies or the companies in respect of which a division is proposed, shall also be required to circulate the following:

Merger and Amalgamation is corporate restructuring. These are done with a view to diversify business and to exercise increased scale of operations. In case you need more information on the same, contact Enterslice.

6 Top Benefits of Outsourcing Your...

Has your company considered outsourcing its finance & accounting? These are important secto...

Any kind of business needs funds to operate and to meet its day to day requirements in the econ...