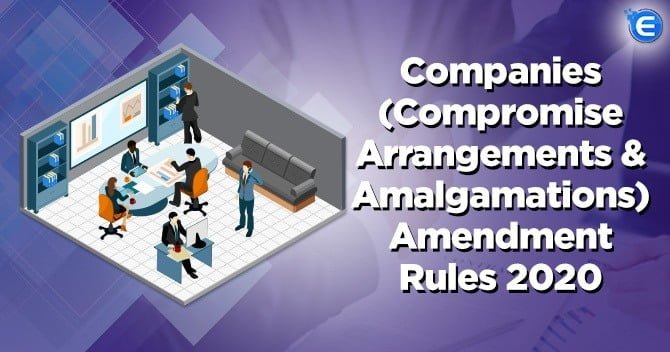 Rule 3 is in relation to “Application for order of a meeting”, in which new sub-clause (5) and (6) has been newly inserted, namely:-

Rule 3(5): A member of the company will make an application for an arrangement, keeping in view the purpose of takeover offer in terms related to Section 230(11). Such a member must hold not less than three-fourths of the shares with any other member in the company. The application has been filed for acquiring any part of the remaining shares of the company.

Note: The application of arrangement is only made by a person for the purpose of the takeover. He must hold atleast three-fourth shares in the respective company.

Rule 3(6): An application of an arrangement for takeover offer must contain:-

(a) The report of a registered valuer has to disclose full details of the valuation of the shares proposed for takeover. It is to be acquired by the member while taking into account the following important factors:-

(b) The application of an arrangement must require details of a particular bank account of a member. For this purpose the new account need to be opened separately, wherein a sum of amount must not be less than one-half of total consideration of the takeover offer is to be deposited.

As above, new sub-rule (6) suggests that it is necessary for the application made for an arrangement to have the report obtained by the registered valuer. It is also important to give full details regarding the bank account in which the amount is deposited by the member. The report must contain the full disclosures regarding the valuation of the shares proposed which has to determine by the two factors itself: (1) during last 6 months, the highest price paid by any of the person or group of persons for acquisition of shares. (2) The fair prices of the shares is also determined by the registered valuer after taking in to account the parameters for valuation of shares of the company.

Note: In the Schedule I of section 230, the application fee for comprise arrangement and amalgamation has been substituted to Rs. 5000/.

The application under sub-section (1) of section 230 of the Companies Act can be submitted in prescribed Form no. NCLT-1, along with a notice of admission in prescribed Form No. NCLT-2, with an affidavit in prescribed Form No. NCLT-6. The copy of scheme of arrangement shall include disclosures as per sub-section (2) of section 230 of the Act and also the fees as prescribed in the Schedule of Fees. Such amendment is made in the sub-rule of this main rule when one company is involved in a scheme of arrangement in relation to which an application is made. The principal rules has been published in the Gazette of India, Part II, Section 3, sub-section (i) vide number G.S.R 1134 (E), dated the 14th December, 2016 and amended vide notification number G.S.R. 368(E) dated the 13th April, 2017. Now it is further Amendment Rules 2020.


See Our Recommendation: Corporate Restructuring through Compromises, Arrangements and Amalgamations.

How to Draft the Scheme of Merger...

How to Draft the Scheme of Merger A scheme of the merger & acquisition is to be submitted b...

Merger and Acquisition Process in I...

Merger and acquisition is used as instrument of momentous growth. It is getting accepted by Ind...