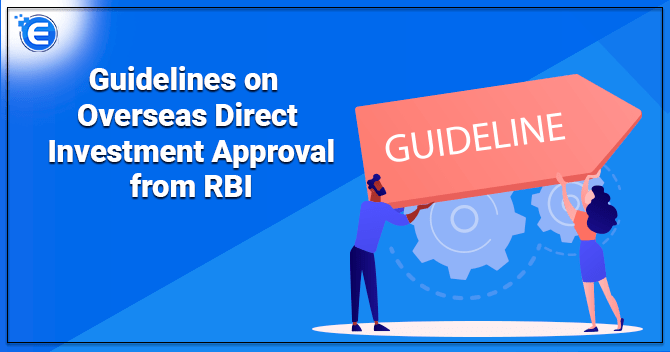 An Overseas Direct Investment relates with respect to the investments made in the Joint Ventures and Wholly Owned Subsidiaries through subscription to the memorandum of a foreign entity or the purchase of existing shares of a foreign entity by way of market purchase or private placement or by stock exchange. The Overseas Investment in Joint Ventures or wholly-owned subsidiaries has been recognized as an important avenue for the promotion of Indian entrepreneur’s global reach.

With a view to regulate the Overseas Direct Investment (ODI), the RBI had notified vide Notification No. FEMA 120/RB- 2004 dated July 7, 2004, amended from time to time. A Master direction on direct investments by the residents in Joint Venture or Wholly owned subsidiary abroad has been issued. These master directions consolidate instructions on rules and regulations set-up by the Reserve Bank under Acts, including foreign exchange transactions and banking issues.

Meaning of Direct Investment outside India

The term Direct Investment outside India means investment under the automatic route or the approval route through contribution to the capital or subscription to the Memorandum of a foreign entity or through purchase of existing shares of such entity by market purchase, private placement or through the stock exchange, thus signifying a long term interest in the foreign entity.

General permission for Purchase or Acquisition of Securities abroad

A general permission has been provided to the person (individual) residing in India for purchasing or acquisition of securities as provided under:

A general permission to sell the shares or acquired is also available. An Indian resident can remit till the prescribed limit by the Reserve Bank from time to time per financial year under the Liberalised Remittance Scheme for permitted current and capital account transactions including security purchase and setting up or acquisition of Joint Venture or Wholly Owned Subsidiaries overseas with effect from August 5, 2013.

An Indian party can make ODI in any bonafide activity. Real estates and banking businesses are the prohibited sectors for making Overseas Direct Investment (ODI). Real estate business includes buying and selling of real estate or trading in (TDRs) Transferable Development Rights, but it does not include development of townships, construction of residential or commercial premises, roads or bridges. However, it may be noted that the Indian Banks functioning in India can set up Joint Ventures or wholly-owned subsidiaries abroad provided that they obtain clearance under the Banking Regulation Act, 1949.

An overseas Joint Ventures or Wholly Owned Subsidiary having direct or indirect equity participation by an Indian party will not offer financial products linked to Indian rupee without the approval of the Reserve Bank.

Joint Venture/Wholly Owned Subsidiary means a foreign entity that is formed, registered or incorporated according to the laws and regulations of the host country in which the Indian part or the resident Indian makes direct investment.

Under the Automatic Route, an Indian party is eligible to make ODI. An Indian party doesn’t require any prior approval, under the automatic route, from the Reserve Bank for making Overseas Direct Investment in a Joint Venture or Wholly Owned Subsidiary abroad. The Indian party is required to approach an Authorised dealer category –I bank with an application in Form ODI and the required documents for effecting the remittances towards such investments. It must be noted that prior approval is needed from the concerned regulatory authority both in India and abroad, in case of investment in the financial service sector. ODI under Approval route means that prior approval is required from the RBI before making any investment.

The applicant is required to approach their designated authorised dealer along with the proposal, which shall be submitted to the Reserve Bank once scrutiny is done and with specific recommendations of the designated Authorised Dealer bank with supporting documents to the prescribed address.

The designated authorised dealer must submit the Form ODI in the online ODI application under the approval route before forwarding the proposal, and the transaction number generated by the application must also be mentioned in the letter.

In case the proposal is approved, the authorised dealer bank is required to effect the remittance under advice to the Reserve Bank in order to allot UIN.

The proposals which require prior approvals are mentioned below-

The UIN allotment does not constitute an approval from the Reserve Bank. The issuance of UIN just signifies taking on record the investment in order to maintain the database. The Authorised Dealer bank or the Indian party must comply with the provisions of FEMA regulations[1]. The confirmation of allotment of UIN is provided to the authorised dealer bank or to the Indian party in the form of an auto-generated e-mail, providing details of UIN allotted to the JV/WOS under the automatic route. The Reserve Bank does not issue any separate letter for the same.

The funding for investments can be made from any of the following sources:

General compliances to be known under Approval route-

The RBI in a set of FAQs released by it last year stated that no Indian Company could acquire stake in an offshore company that has investments in an Indian entity. It will still apply if an Indian company buys an insignificant stake in an overseas company that either holds or picks a minority interest in some other Indian company. The rule may impact genuine Overseas Direct Investment though it’s aimed at minimizing round-tripping of funds and to curb the inflow of cheaper debt raised in the form of FDI.

In its Global Investment Trend Monitor report, the United Nations Conference on Trade and Devel...

Investment by FPI in Defaulted Bond...

The meaning of Non-Repatriable basis means the sale or the result of the proceeds of the sale,...