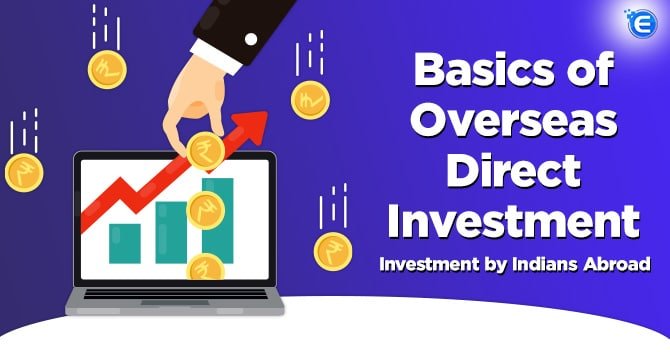 Overseas Direct Investment has allowed Indians to show their capabilities on the global platform by allowing diversification of businesses abroad and enabling businesses to grab the wide number of opportunities that come from overseas.

Overseas Direct Investment from India is the opposite of Foreign Direct Investment. It not only helps the Indian party to earn profit but also helps in building good relations with other countries by offering a chance to become their business partners and share the knowledge, resources, technology offered by developed nations.

Overseas Direct Investment outside India can be made by acquiring a significant interest in the foreign entity either as a Joint Venture or wholly-owned subsidiary, by way of making Investment through:

Overseas Direct Investment can be made either through automatic route or government approval route.

An Individual resident is allowed to make Overseas Direct Investment through:

Remittance of the amount made shall be up to the limit prescribed under the Liberalized Remittance Scheme for permitted capital and cash transaction.

An Indian Party can make Overseas Direct Investment from India in the joint venture and WOS as per the ceiling prescribed by Reserve Bank of India.

The term ‘Indian Party’ can be defined as:

Conditions for Overseas Direct Investment (ODI) by the Indian Party

Conditions to Acquire Shares in Exchange of ADR/GDR

An Indian Party can acquire the shares of a foreign company in exchange of ADRs/GDRs issued under the Scheme for the issue of Foreign Currency Convertible Bonds and Ordinary Shares (through Depository Receipt Mechanism) Scheme, 1993, and the guidelines issued there under from time to time by the Government of India provided:

Overseas Direct Investments by Indian individuals of companies in an overseas JV / WOS shall be out of any of the following modes:

Financial commitments made shall be in the following ways:

Bhawna Dang is a competent and skilled professional, holding an educational background in M. Com, Company secretaryship and LL. B. She holds ample experience of 4 years working as an Advisory Associate with a blend of corporate background. She has extensive knowledge in handling matters relating to Reserve Bank of India and has also worked on various secretarial and listing compliances of corporates.