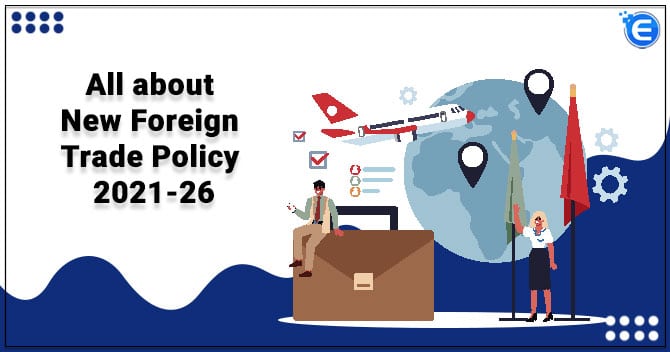 India is an emerging player in the global economy and the foreign policies formulated by the government has made a significant effect on the foreign investments made in and by India. For the success in the economic development, India has to adopt a set of policies after the expiry of every 5 years known as new foreign trade policy.

The article, talks about the new foreign trade policy 2021-26.

The Minister of State for Commerce & Industry Mr. Hardeep Singh Puri, chaired the meeting and Hon’ble Members of Parliament & senior officers of the Ministry attended the meeting.

The main mission of the new foreign trade policy is to make India a leader in the International Trade in the next 5 years, i.e. 2021 – 26.

The FTP outlines the government strategies to promote export of goods to increase the economic growth in the country.

The foreign trade policy in India is basically a set of guidelines for the import & export of goods & services. The policy is formulated by the DGFT (Directorate General of Foreign Trade), which is the governing body to promote & facilitate the exports & imports of the goods under the Ministry of Commerce & Industry.

The policy is notified for the period of 5 years and is updated on 31st March every year and comes to effect on 1st April. Though the policy covers the aspect of imports & exports, its primary aim is to facilitate trade by reducing the cost of transaction & time & by making the Indian exports competitive globally.

What are the expectations from new foreign trade policy 2021 – 26?

A new foreign trade policy is formulated after the consideration on the inputs by traders, trades associations, members of parliament.

Some key expectations are:

The government has introduced the Remission of Duties or Taxes on Export Products (RoDTEP) to end the need of the hour, i.e. WTO compliant tax benefits. The RoDTEP became effective from 1st January, 2021 and it replaces MEIS but the rates & conditions of the scheme is yet to be announced.

There is a problem that goes way back, related to lending money to MSMEs because they lack adequate collateral. There is a demand of credit access from the exporters especially MSMEs. This policy can help to start or open up the alternate avenues and the advisory group has advised to increase the borrowing limits at the Export Import Bank of India.

The government must support in respect of easing & lowering the tax rates. The confederation of Indian Industry proposes to simplify the import duty structure, i.e., high duties on finished goods & lower or minimal duties on the raw materials.

India’s import community has a wish list that includes permission to import capital goods on self – certification basis & to import prohibited goods with the approval of Central Government or Inter – Ministerial Standing Committee.

There are many exporters who lacks awareness in respect of trade opportunities. The Indian government must formulate policy in such a way that it consists of workshops & awareness programs to make the exporters aware about the international laws, global markets, etc.

With the help for new foreign trade policy, it can ensure a stable demand & supply that helps in economic growth. The policy also allows the country to increase in import & export in the country and to makes India’s position in International market.

Read our article:New Foreign Trade Policy will come into effect from April 01, 2021

IEC is mandatory for all types of Import and export business in India. Liberalization helped th...

Setting up an import export company...

If you wish to set up a company which deals in import export business then you should consider...