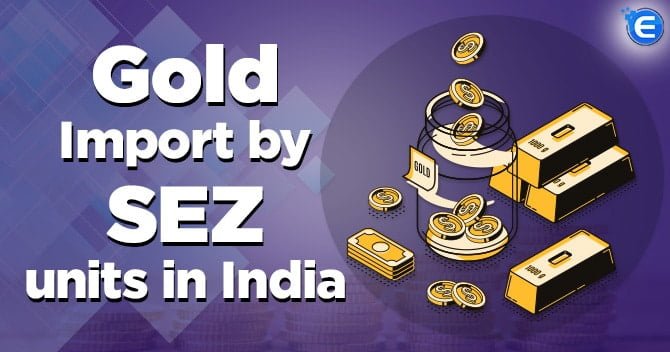 The Central Board of Excise and Customs Directorate General of Export Promotion under the Ministry of Finance, Government of India on 4th September 2013 notified regarding the procedure to be followed by the agencies for supply of duty-free gold to the exporters. The fresh guidelines were issued after the Board’s circular in the year 2009. The circular issued by it in 2013 shall supersede the one of 2009 in respect of gold import. However, the import of silver and platinum will continue to be governed by the 2009 customs circular.

The import of gold by the aforementioned agencies shall be subject to the following conditions:

The prescribed procedure for import of gold is as follows-

Procedure for Import of precious goods (Gold, silver, platinum or gems and Jewellery) by SEZ

Under Rule 29(5) of the SEZ Rules, the SEZ may import precious goods (Gold, silver, platinum or gems and Jewellery) as personal baggage through an authorized passenger in the following way-

Also, Read: How to Setup an Import Export Business in India: A Guide for Entrepreneurs.

How to obtain IEC Registration for...

Today everyone desires to grow and expand their business globally. However, it may not be as ea...

Requirement for E-filing of Non-Pre...

The Director-General of Foreign Trade (DGFT) has announced an extension of the timeline for com...

IEC is mandatory for all types of Import and export business in India. Liberalization helped th...