DGFT bans imports of the air conditioner with refrigerant 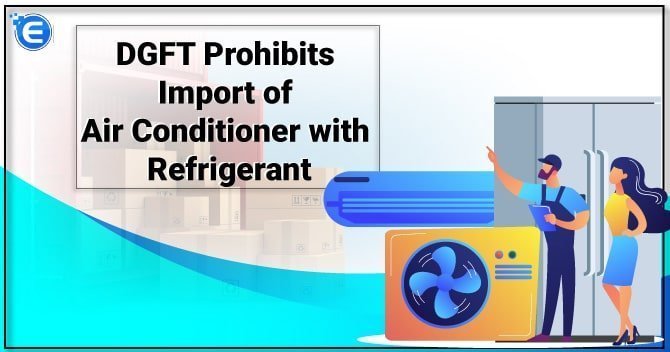 The Director General of the Foreign Trade via its official notification dated 15th October 2020 forbids the import of air conditioners with refrigerants with a motive to cut imports of non-essential items and promote domestic manufacturing. The ban is obligatory on both window as well as split ACs containing refrigerants.

In the import policy of India, air conditioners with refrigerants are further amended from the status of free to the status of prohibited, the Directorate General of the Foreign Trade[1] (DGFT) informed in its notice. The government has initiated taking various steps to encourage domestic manufacturing and decrease the import bill of non essential goods.

Similar to the abovementioned step, in June, the government obligatory curbs on imports of various types of tires used in motor cars, busses, lorries and motorcycles.

The government has initiated taking various steps to encourage domestic manufacturing and decrease the import bill of non-essential goods. This particular development has come in the middle of growing demand in India for the boycotting the products which are made in China after the conflict arose at the border between the two countries, collective with the push of the government for the Aatmanirbhar Bharat (self-sufficient India).

The entire country, after having tensions with Chinese troops at the border is standing together and united showing commitment to their motherland, as a consequence of the loss of lives of our Indian soldiers due to the India-Chinese disagreement in the Ladakh region. Hence there is a nationwide campaign pertaining to boycotting Chinese products. The government has taken various steps against these anti-China sentiments including the ban of Chinese apps, bans imports of the air conditioner with refrigerant, and notices to the e-commerce giants in India to display information such as country of product’s origin, sold on their platforms in India.

It is also worth noting is that the fact that the Commerce Ministry’s infestation arm, the Directorate General of Trade Remedies, has suggested anti dumping duty for a period of five years on Chlorine Chloride imports from China, Vietnam and Malaysia, after an outbreak of complaints by domestic manufacturers.

The Directorate General of Foreign Trade (DGFT) by its notification no. 41/2015-2020-DGFT dated October 15 2020, to amendment in the policy of Import of items under ITC HS Codes 84151010 and 84151090 in Schedule — I (Import Policy). The Union Government from time to time amends the Import Policy of India for the betterment of the Indian economy.

From the above mention table, it is cleared that the import policy of the air conditioners with refrigerants under the codes of HS 84151010 and 84151090 is adjusted from ‘Free’ to ‘Prohibit’.

The motive behind this notification is to amplify the home-grown manufacturing of all such products available to enhance self-reliance. However, a foremost push behind to the India’s drive of self reliance was the fresh border standoff with China. Since the disagreement began, India has been reducing down their imports from the people republic of China as part of severe trade measures.

It must be taken into consideration that the domestic market of air conditioners in India is gigantic and believed to be approximately $5 to 6 billion. The Central government, however, wants local manufacturers to increase their sale and production, in line with its mission of Aatmanirbhar Bharat.

In the period of April and August, Indian imports from China have de-escalated over 26 per cent to $21.58 billion as evaluated to the parallel period in the previous year. The same has been informed by the central government recently in the Parliament.

If we go back to the 1980s India was not capable of manufacturing the technical components, but now with technological and economical advancement, the Indian government wants to boost the production of the ACs with refrigerant, by banning the imports from the outside.

To put the import restriction and supporting the domestic industry is the ultimate goal of the Indian government to make Indian a hub of manufacturing.

The above makes it clear that the import of air conditioners with refrigerants was implemented for a motive to cut the imports on non-essential items and promote domestic manufacturing. The ban is obligatory on both windows as well as split ACs containing refrigerants. The Indian import policy air conditioners consist of refrigerants that are additionally amended from the free status to the status of prohibited, Directorate General of the Foreign Trade notified in its notification. The government has initiated taking various steps to encourage domestic manufacturing and decrease the import bill of non-essential goods.

The Central Board of Excise and Customs Directorate General of Export Promotion under the Minis...

Surrender IEC License: All you need...

Out of all the different registrations required by a person while starting a business, IEC Regi...