Remission of Duties or Taxes on Export Products: RoDTEP Scheme 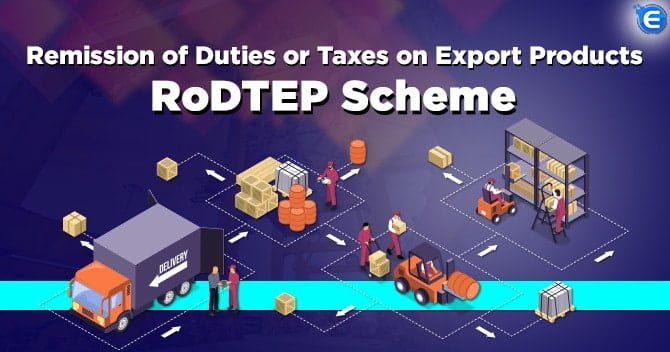 The Remission of Duties or Taxes on Export Products (RoDTEP) Scheme has been formed by the Indian government. It is a scheme that replaces the existing MEIS (Merchandise Exports from India Scheme) scheme for the export of goods from India.

It aims to reimburse the taxes and duties incurred by the exporters like the local taxes, coal cess, electricity duties, mandi tax, and the fuel used for transportation that is not exempted nor refunded under any other existing scheme. The rebate shall be claimed as a percentage of the FOB (Freight on Board) value of exports.

The government of India has approved this scheme recently, and it shall be notified in a phased manner, and accordingly, items shall be moved from the existing scheme of MEIS to RoDTEP with appropriate monitoring and audit mechanism. This scheme shall incentivize exporters at a cost of INR 50000 crore to the exchequer.

What are the objectives of the RoDTEP Scheme?

The main objectives of this scheme are as follows:

Some essential points to note regarding the RoDTEP Scheme

Some of the notable points of this scheme are as follows:

What are the benefits of the RoDTEP scheme to Indian exporters?

The benefits that are provided under the RoDTEP scheme to the Indian exporters are as follows:

By adopting this scheme, the Indian exporters would be able to meet the international standards for exports. It shall help in increasing the economy of the country and working capital for the enterprise.

The Ministry of Finance shall establish a working group on standards that will lay down the roadmap for the adoption of standards, enforcement, and timelines. It will also provide support to the exporters in dealing with the non-Tariff barriers such as slow testing and export clearance process.

Tax assessment may get fully automatic for the exporters. Businesses shall access their refunds for GST through an automatic refund route.

The Ministry of Finance has been working on minimizing the clearance time at the airports and ports in order to decrease delays in exports. Exporters shall be able to monitor real-time clearance status through a digital medium.

Exporters are set to enjoy lower rates of interest on capital loans and other financial benefits like higher insurance cover and financial incentives on exports.

What is the difference between the MEIS and RoDTEP scheme?

The scheme of MEIS and RoDTEP differ in the following aspects:

In case of MEIS, an additional incentive in exports of goods is available apart from other refunds and drawbacks on undertaking such export, whereas in case of RoDTEP refund of indirect taxes on the inputs used in the manufacture of exported products which is not presently reimbursed by any other existing schemes.

2% to 5% of FOB value of exports in case of MEIS whereas Product based % way of reward in RoDTEP.

As far as transferability is concerned, both MEIS, as well as RoDTEP, is freely transferable.

Implementation of the RoDTEP scheme replacing the MEIS would make this country a compliant exporter in the international market. However, the government of India must make sure that the new scheme shall not reduce the advantages of the present scheme. Moreover, reducing the incentives to the exporters may thump the exports by India.

Our Recommendation: FEMA Compliance on Export of Goods and Services

The Reserve Bank of India issued a principle-based resolution framework for addressing defaults...

Buyers and sellers in international commerce are placed some distance away and are entirely uni...

Secured vs. Unsecured Loans in a Nu...

Taking out a loan can feel like a big decision and it is! Often, an offer comes in the mail for...