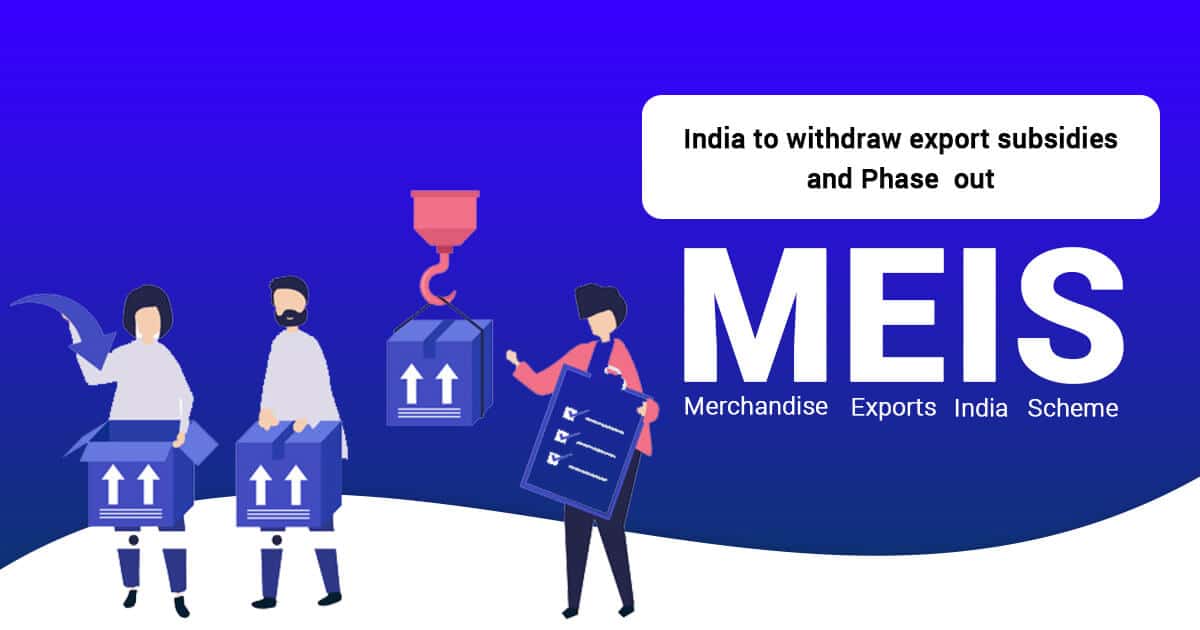 To phase out the flagship Merchandise Exports from India Scheme (MEIS). The commerce ministry has circulated a Cabinet note and move to a more WTO – Compatible regime, as countries like the US have challenged India’s export “subsidy” programs. The scheme will be monitored by the Ministry of Commerce and Finance[1] (Department of revenue).

As reported by FE, Exporters will be refunded levies that are not reimbursed through freely transferable scrips. Further, the new scheme will refund both state and central levies on inputs consumed in exports and various sectors will be covered in phases. The rate of scrips for various products will fix by the duty drawback panel under the finance ministry. The main motive behind the scheme is-

MEIS scheme provides an incentive in the form of duty credit scrip to the exporter to compensate for his loss on payment of duties with the only aim in making India’s products more competitive in the global markets. The countries have been segregated into three groups to determine the quantity of incentive. Additionally, Incentives on export depend on the group in which its destination country belongs which is represented by the 8-digit level (ITC HS codes).

The countries are essentially segregated into 3 groups mentioned below

What is Duty Credit Scrips?

Under MEIS scrips, the incentives are awarded to exporters in the form of Duty Credit Scrips which are freely transferable can be easily sold to anyone and can be used for the payment of customs duty.

Reason of Discontinuance of MEIS

Cabinet note was issued by the Commerce Ministry to discontinue the MEIS (Merchandise Exports from India Scheme) because countries like the United States challenged India’s export “subsidy” programs and challenged India’s eligibility to extend export subsidies at the WTO (World Trade Organization).

The motive was to recast the export incentives which as a result could be a part of the new Import-Export Policy as the current policy will expire in 2020.

NOTE: “MEIS has been a lifeline for the industry and its withdrawal would impact the industry very badly and end up claiming thousands of jobs, especially in medium and small enterprises”. – Raja M Shanmugham, President, Tirupur Exporters Association

Highlights of the Scheme

Further, the move to phase MEIS will lead to a major disaster and kill the industry because the industry operates at a very low margin and Withdrawal of the incentive by phasing out the MEIS will turn the margin negative. For the growth of the industry, it is of utmost importance to come out with an alternative policy that extends benefits equivalent of MEIS compatible with WTO rules for the growth of the industry. It is important to provide infrastructure facilities apart from contracting free trade agreements with the EU, the United Kingdom, Australia, Canada.

An investment property is a property that has been purchased to earn the return either through...

Foreign Direct Investment (FDI) is an investment whereby a firm or individual of one country ma...