Neo Banks in India: Will it be the new normal? 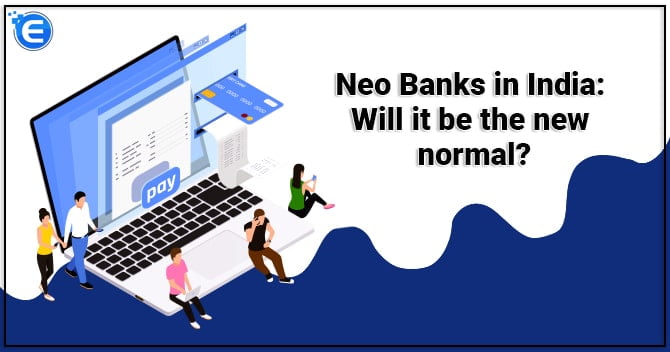 With the advancement of disruptive technologies, the business of banking is changing. The customer behaviour and expectations have also caused the business and the operational models to change. Therefore we have witnessed the rise of Neo banks. It is still in its early days in India, but it could be the new normal going forward. In this article, we shall discuss the regulatory aspect of Neo Banks in India.

Neo Banks have provided the underbanked or unbanked customers access to financial services and products that were scarcely available or required paying huge fees and stringent regulations.

Some may perceive digital bank and neo bank to be the same as they appear to be based on the mobile first approach and its emphasis on digital model of operation, however, they are not the same.

The terms may be used mutually, but digital banks are usually an online-only subsidiary of an established and regulated player in the banking sector, whereas a neo bank exists online only without having any physical branch and operate either independently or in partnership with traditional banks. Thus they fit into the regulatory requirements.

According to Indian Regulatory Regime, virtual banking licenses are not provided. RBI[1] has mandated the need for digital banking service providers to have physical presence.

Therefore neo banks in India can provide banking services only through outsourcing their banking responsibilities to banking institutions having license or NBFCs.

Neo banks are addressing the regulatory plight in India by outsourcing their banking responsibilities to those having licenses by creating strategic partnerships with traditional banks and advancing amplified services through the existing ones.

There are quite a handful of neo banks that are operational in India, which may disrupt the Indian banking sector. Some of the key players include:

It may be noted that these banks do not have any lending restrictions, such as small finance banks, as the capital comes from their partner banks’ lending books. These banks have been an attraction to the investors also as they are focussing on Small and Medium Enterprises, which is an underserved and untapped market in India.

Why people opt for Neo bank?

Neo banks have reportedly played a massive role in catering to the underserved MSME sector in India. Neo banks have targeted MSME by providing them banking services which is otherwise not provided by traditional banks. An example of this is the disbursal of credit which has been simplified by the neo banks.

Apart from this, neo banks draw customers by the fact that they offer value added services over and above the traditional banking institutions. Some of the popular facilities provided by neo banks in India include the following:

These services by neo banks have made them widely popular among the tech savvy youths who like banking through applications from the comfort of their locations instead of visiting a bank branch physically, which is time consuming and less convenient.

The strict banking regulations in India mean that neo banks can’t offer banking and financial services autonomously. They require partnering with an entity having banking license and then can offer services in partnership with such banks. However, in order to thrive, neo banks in India need to win the trust of the customers as trust is essential for innovations such as Neo banks.

Read our article:Evolution and Growth of Digital Banking in India

Omnichannel Banking: Is It Really R...

Rise of Core Banking in India

The introduction of technology into the banking system has caused a massive transformation in t...

In the banking industry, customers are the epitome who cause business disruption, and financial...