Evolution and Growth of Digital Banking in India 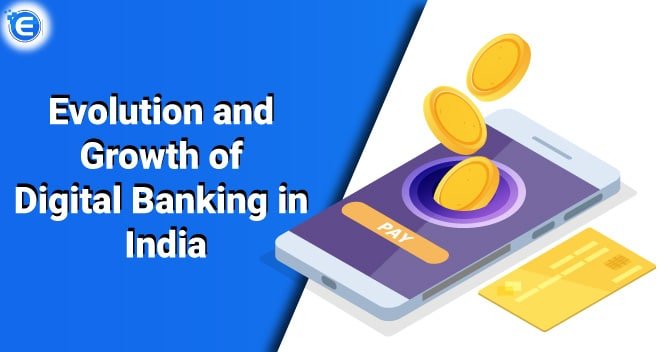 Earlier, when we used to talk about Digital Banking in India, the industry in India was lagging behind many developing nations. It was due to the increased use of legacy systems, huge costs of running branches, and outdated technology that could not be upgraded. Since then, India witnessed gradual yet dynamic growth in Digital banking.

What is Digital Banking?

Digital banking means the digitalization of the traditional banking activities and services that were earlier only available when customers visited the bank branch in person. Banking is done through digital platforms. The banking services can be accessed through smartphones, laptops, etc.

When was the need for Digital Banking in India first realized?

The need for computerization of the banking sector was felt in the late 1980s. Therefore the Reserve Bank set up a committee in this regard in 1988 headed by Dr. C. Rangarajan.

Banks started using information technology initially with the introduction of standalone Personal Computers and migrated to Local Area Network connectivity. Then with further evolution, banks adopted the core banking platform. It was when branch banking was changed to bank banking.

Core banking solution allowed banks to raise the comfort aspect to the customers, and it was hailed as a promising step towards improving customer convenience through the so-called “Anywhere and Anytime Banking.”

Thereafter the process of computerization kicked up with the opening of the economy in the early 90s. A major propeller for this transformation was due to the rising competition from private and foreign banks. Many commercial banks started adopting digital customer services to stay competitive.

In 2016, the government launched the UPI system, a banking system that allows people to easily transfer money to and from bank accounts. The UPI system kicked up a digital revolution in India and brought about the so-called “Mobile Banking.” This form of digital money transferring was provided to account holders prior to 2016; however, it was not accessible to everyone as that wasn’t based on mobile systems. Now with UPI, anyone can open a bank account and make transactions via a mobile phone.

The government has also asked the customers to link their bank accounts with their Aadhaar number. This is to ensure that the person accessing the bank account is the person who owns it. With digital banking, a person can easily open a bank account in India and that too, without even visiting the bank branch.

Current status of India in the digital set-up

The Indian Government has been promoting digital transactions like never before. The launch of UPI and BHIM by National Payments Corporation of India[1] has been steps of innovation in the domain of Payment system.

Today banks are looking to provide fast, accurate, and quality experience of banking to customers, and Digitalization has become one of the top priorities of banks in India.

As per the report of RBI in 2016-17, there are more than 2 lakh ATMs and more than 25 lakhs Point of Sale (POS) devices. Implementation of electronic payments systems like National Electronic Fund Transfer, Real Time Gross Settlement, Cheque Truncation System, Mobile banking system, and all have gained wide acceptance among Indian banks. These are some of the finest landmarks in the evolution and the growth of digital banking in this country.

Are there any challenges that are still a barrier to the growth of Digital Banking in India?

Despite an improving performance in the digital landscape, there are still certain challenges that obstruct it from achieving its true potential. Some of these challenges are discussed below.

Arguably one of the biggest concerns while operating in this landscape is Security. Banks are exposed to external as well as internal security risks. Customers also want to feel secure while they use digital banking. We recently have heard about banking frauds increase in this nation, especially since lockdown. Therefore the regulatory authority must intently work on this aspect for further growth.

There are a number of people who lack the basic knowledge to use this facility in India. Due to lack of awareness, people using this medium can easily be fooled by cyber criminals. Recently RBI stressed the need for an increase in customer awareness camps in this regard.

The Future of Digital Banking in India

The wave of digital banking has made banks in India to leverage technology by bringing an entire bank to your smartphone. With the current pandemic of Covid-19, those who were reluctant to use digital banking are now forced to do so. Therefore there are chances that this shift may not be temporary, and we may see more people using this mode of banking in the near future because of its convenience and streamlined process.

Business analytics and Artificial Intelligence has the potential to bring a colossal change in the banking landscape. Robotics enabled by Artificial Intelligence is expected to be the future game-changer for banking industry. Many private banks are contemplating robots for customer service and for other things. Going forward, digital banking shall be the most preferred form of banking in India.

We are in a digital world where even a small daily activity in life can be facilitated by Digital banking. The wave of Digital banking in India allows you to remain paperless and enables you to bank in a convenient and simplified manner.

How can Customer Experience be impr...

With the advancement of technology, banks have been vying to provide the best customer experien...

Maintaining a balance between Digit...

Banks and credit unions that lack digital options have found it tough to stay operational amid...