The Future of ATMs in the era of Digital Banking 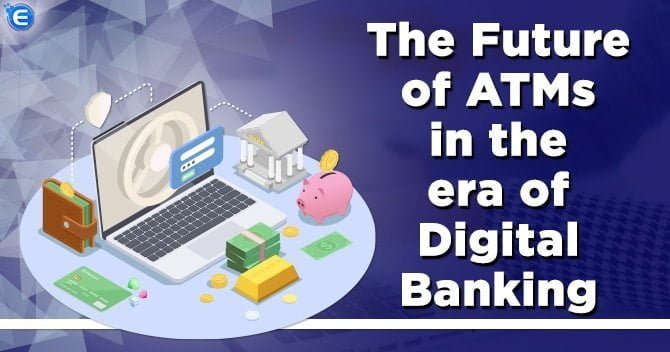 The introduction of ATMs has caused a considerable change in the way we deal with our day to day financial works.  It has played a crucial role in simplifying the process of cash dispensation. Technology has also contributed to the success of ATMs. However, with digital banking and growing concerns of the Covid-19 pandemic around the world, the future of ATMs is in question.

Understanding the Impact of ATMs

Cash has been one aspect of the financial sector that has become firmly rooted in our economy. The significance of cash has also increased the utility of ATMs and has become a vital physical touchpoint for financial technology institutions to stay connected with their customers and members.

ATMs have eased the way out for the users by giving them easy access to their money deposited with banks. They now don’t require visiting bank branches and queuing up in the banks to withdraw cash or to make an enquiry about their accounts. In this manner, they have caused the users to conveniently transact regardless of the time or place.

It may sound a bit odd that ATMs were earlier considered as a popular form of digital banking. Amid the talks surrounding a cashless economy, all ATMs have still remained relevant to a majority of bankers, and it has been one of the go-to medium for them to withdraw cash.

What are the challenges surrounding the future of ATMs amid the rise of digital banking?

With the rise of digital banking, users are now able to access their bank accounts for routine financial services and have slightly shifted to credit and debit cards instead of ATMs.

Let us look at some of more such challenges-

Why is ATM still relevant in retail banking despite the availability of digital channels?

The competition has grown tremendously in the last few years, with new payments banks coming up in the scene. So the banks are in a constant pursuit to provide customers with unique banking experience in order to stay relevant. The banks are also aware that it is the way to ensure that a customer stays banked to you. One such way is through ATMs.

The element of convenience and the simplified process has been one of the fundamental reasons why ATMs have still remained relevant. If one observes the number of times, a customer visits the bank branches and the number of times they visit ATMs, which would be higher? The usage of ATMs is much higher. It is because ATMs are one of the most trusted channels as it the extension of the branch.

Banks have understood this fact and have looked to provide the best experience at the ATMs. They are also contemplating on other value-added services that they can provide to customers at ATMs in order to keep them banked.

Today the ATMs are doing more than just dispensing cash. It can be used to deposit cash, or the utility bills can also be paid through it. ATMs’ uniform and consistent customer experience have played a pivotal role in keeping the ATMs relevant and preserved the future of ATMs to some extent despite the presence of different digital channels.

ATMs have provided the opportunity for banks to employ cost-effective models. In the beginning, there was a sense of doubt about the sustainability of ATMs or the future of ATMs considering the rise of digital banking, but these doubts have been put to rest because a majority of people still use ATMs across the world and especially in India. However, the challenges faced by ATM are also needed to be addressed lest its utility fade away in the future.

Digital identity verification can come with privacy issues. With increased use of digital and o...

When the Reserve Bank of India banned banks of India from processing payments related to crypto...

Where does India Stand in Digital P...

With the onset of UPI, the number of people using digital payments has increased tremendously....