Merger and Acquisition Process in India 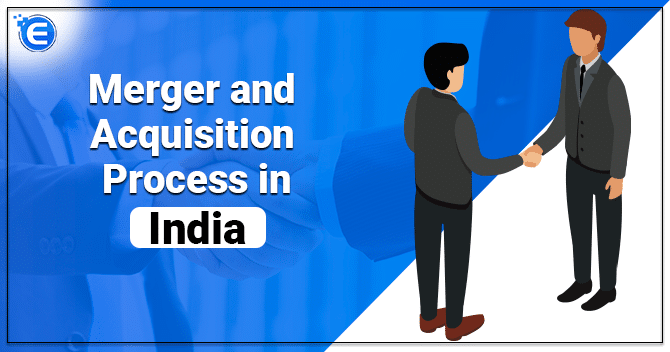 Merger and acquisition is used as instrument of momentous growth. It is getting accepted by Indian business like never before as a tool of business strategy. In this article, we will discuss the types, benefits, differences between the Merger and Acquisition Process.

The term merger has not been defined under the Companies Act 1956 or Income Tax Act 1961, however, Companies Act 2013[1] explains the concept merger. Merger can be defined as a combination of two or more entities to make a new entity.

Merging Company: The entity which transfers its assets to other entity.

Merged Company: The entity to which all the assets are transferred by the merging company.

The Main Aim of the Merger is:

The merger can be on the basis of these two:

On the basis of Integration:

On the basis of integration, merger can be classified into following types:

On the basis of Business Activity:

On the basis of business activity, merger can be classified into the following types:

The benefits of merger are as follows:

Merger and Acquisition Process: The Procedure of Merger

Companies Act 2013 provides fast-track Merger and Acquisition process. The procedure is as under:

1. Both the transferor and transferee shall convene the Board meeting separately and pass the following resolutions:

2. After holding the Board Meeting both the Transferor Company and the transferee company shall publish the notice of the proposed scheme to invite any objections or suggestions regarding the same. The copy of the notice shall be sent to the Registrar of Companies and the Official Liquidator.

3. Before convening the meeting of members and creditors, both the transferor and transferee company shall file, with the ROC of their state where their registered office has situated, a declaration of solvency.

The objections received shall be considered and discussed at the general meeting and will be approved by the members of both the companies.

5. After convening the meeting of members a notice of creditors shall be given at least 21 clear days before the meeting by both the transferor and transferee company. The scheme of the merger to be executed has to be approved by the creditors representing 9/10th in value.

7. After the scheme is filed and the Registrar and the Official Liquidator does not have any objections the Regional Director shall register the same and will give a confirmation regarding the same.

The acquisition is generally done as a part of the Company’s growth strategy. There is no technical difference between the takeover and acquisition.

There are basically two forms of acquisition. They are as follows:

Unlike a friendly takeover, there is no agreement in a hostile takeover. The acquiring company secretly acquires the target company. Generally, in this kind of take over, there is no or little mutual benefit. This kind of takeover takes place when the target company do not agree or gives its consent to the acquisition. Majority stake or ownership is taken secretly to force the acquisition.

The benefits of Acquisition are as follows:

Before acquiring any company detailed research about the company is necessary which will avoid the problems in the future. A matrix of the company should be made regarding the profitability, cash flow, growth rate etc.  Research should be done through various sources.

After the research have been completed, the acquiring company should contact the target company so that many issues can be clarified which would take place in the future. Contact can be made through the following ways:

In this step, the acquirer company shall give a list of due diligence to the target company. This process may take a considerable amount of time as the documents may not be easily available with the target company as it may not be prepared for selling itself. Audited financial statements will help a lot as it will depict the true financial position of the company.

After the due diligence has been completed, it may be possible that the acquirer company may be in a position to do bargaining or negotiation in relation to the price demanded by the target company for the acquisition. The process of due diligence will help in finding any major issues which will help in bargaining.

What is the Difference between Merger and Acquisition Process?

Mergers and acquisition are the two of the most misunderstood words in the corporate world. Although both words refer to the joining of two companies but there are differences that make them distinct.

The merger is when two or more than two entity generally of the same size combine to form a new entity or joint organization. In merger both the entities may be equal partners.

In Acquisition procedure, one entity purchases the other entity. Generally, the acquiring entity is bigger than the acquired entity.

In merger new entity comes into existence but in the acquisition, no new entity is formed because the entity is acquired by the existing entity.

Read our article:Analysis of Mergers and Acquisitions

Foreign Direct Investment is understood as any form of direct and indirect investment from a fo...

What are Mergers & Acquisitions and Joint Ventures? Mergers and acquisitions are defined as...

The Best Advice for Mergers &...