Analysis of Mergers and Acquisitions 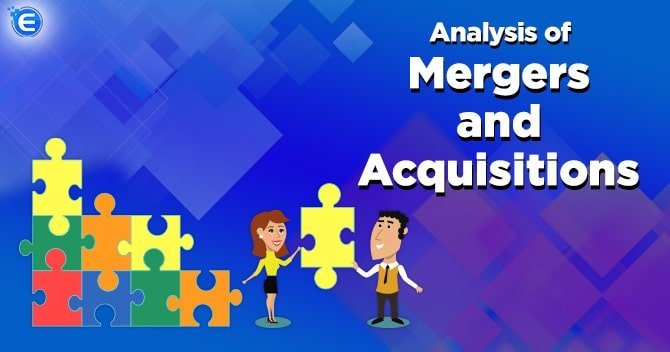 A merger can be understood as a combination of two or more entities.  This term is synonymous with the other terms that are used in day to day business. Some of the terms used in the business world are amalgamations, arrangements, and combinations. Though these terms are used in business, the meaning which they bring about is the same. Mergers take part in everyday business and are not just limited to companies that are private and public. They happen in partnerships, trusts, and even proprietorship concerns. Therefore, the merger market is not only limited to companies, but also apply to all forms of business structures.

Companies merge to combine their collective strengths to compete in the market. Hence a merger is beneficial for a business. However, there can be various issues related to a merger. Such issues can arise in the pre-completion phase of the merger or post-completion phase of the merger. The parties that are involved in a merger transaction have to keep in mind various factors that affect the transaction. Some of these factors may be legal, financial, market, pricing, and competition factors.  During a merger transaction, there has to be proper coordination between government authorities, financial institutions, lawyers, accountants, and the benefactors of the merger. Hence before there is a merger or acquisition, there has to be proper broad-based understanding of the analysis of mergers and acquisitions.

Before going to the analysis of mergers and acquisitions, it is significant to understand the history of Mergers and Acquisitions in India.  In the colonial era, there was the establishment of the East India Company, which had monopoly and control in the Indian markets. There was a requirement of taking permission during this time for forming companies. After the Second World War and post-independence, the merger market has evolved.  The Indian government has brought out various laws and regulations that required the nationalization of multiple companies. This step brought out a reduction in the number of public companies that were operating in India.

Some of the sectors, such as Insurance, had more than fifty such insurers. All these insurers were brought under the control of a single Insurer, the Life Insurance Corporation of India. However, during the pre liberalised period, the Indian government brought out various regulations in order to restrict situations such as monopoly and oligarchy. Some of the regulations brought out were the Foreign Exchange Regulation Act, 1973 (FERA) and the Monopoly and Restrictive Trade Practices (MRTP Act). These regulations have restricted the amount of economic activity in India and concentrated more on the national businesses for Indian growth.

Foreign companies were not allowed to conduct business in India because of various regulations under FERA, and companies that take part in a merger transaction were not allowed to control markets under MRTP law. From the above analysis of mergers and acquisitions, it is understood that though the regulations brought out by the government were beneficial for the economy; it would not allow access to the development of the economy. Due to constant government intervention, some regulations were repealed as they would be a deterrent to the Indian economy. Due to the effect of this, there was a requirement to relax the markets for entry of foreign competitors.

Liberalization took part in 1990, which eased the markets in India. This led to many international firms, setting their footprint in India. This indirectly affected the competitiveness of Indian companies. To compete with multinational giants, companies came up with strategies and priorities to survive in the market. Therefore for companies to benefit from economies of scale and economies of scope, they considered alternatives to engage the competition. The options related to mergers and acquisitions were available to them.

Difference between a Merger, Acquisition and Joint Venture – Analysis of Mergers and Acquisitions

In a Merger, there is a combination of two or more entities. Both the companies and the respective business structures are merging their strengths to compete against the competition. The literal meaning of the merger has not been defined under any law in India. From the analysis of mergers and acquisitions in India, the meaning is not provided in the Companies Act 1956 or the law related to Income Tax 1961.

However, according to the Companies Act 2013, a merger can be understood as a combination of two or more entities to improve the position of their overall assets and liabilities.  Many advantages are obtained from a merger, such as- access to new information, research and development, technologies, and product benefits. The outcome of the merger is that the formed entity is treated as a new entity in the eyes of the law. The merging parties are not existence post merger.

Selling Company- This is the party that sells the company owned by it or controlled by it.

Though the JV is another form where there is a shared benefit of the business, companies prefer to opt for this form of venture as there is a lesser amount of risks. From the perspective of the analysis of mergers and acquisitions, the risk and challenges faced by a Joint Venture are lower.

From the perspective of a Competition Law for analysis of Mergers and Acquisitions, mergers can be divided into the following:

Vertical Mergers is a business process where the companies are in different lines of business. A classic example of a vertical merger is between a company that is producing drinks and a company that is providing tetrapak containers for storing juices.  This form of integration benefits the company in various ways. A company would not have to depend on another company for production processes and can be self-sufficient in its production processes.

The entities are in the same line of business in this form of merger. A classic example would be a merger between two dairy companies that are in the same production line and product cheese and milk. One of the primary purposes of this merger is to control more market share and also deter competition. In this form of merger, the entities that compete against each other prefer merging instead of having aggressive competition.

In this form of a merger, there would be three entities where the merger is between the target and the acquirer subsidiary. There will be some form of tripartite arrangement between the parties to the merger agreement.

A broad-based analysis of mergers and acquisitions shows that entities can opt for any form of merger based on their requirements of the business.

Like Mergers, there are also different types of acquisitions. The Acquisitions are classified into the following:

So in an asset sale, the buying company would only acquire some assets or any particular asset of the business. If there is a transfer of the employees of the business, then if there are any specific forms of legal notices or court orders/ third party liabilities against these employees, then this also will be transferred to the buyer business. However, the buyer would get the advantage of choosing what assets to consider buying from the business of the Seller/ Target Company. This would give the buyer an added benefit to calculate the risks of a particular asset before purchasing them. Therefore in the process of an asset sale, the obligations are transferred along with the business. An analysis of mergers and acquisitions portray that before considering an acquisition/ takeover, the buyer has to consider the overall performance of the company.

Applicability of Regulations – Legal Analysis of Mergers and Acquisitions

From the Legal analysis of mergers and acquisitions, the following regulations would apply:

Parties in a Merger- Analysis of Mergers and Acquisition

The following parties are involved in a merger and acquisition transaction:

An analysis of mergers and acquisition indicate that not only the above parties are involved, but also external agencies/ international bodies play a significant role in a Merger and Acquisition Process.

Analysis of Merger and Acquisitions- Advantages of a Merger

Considerations required before a Merger/ Acquisition- Analysis of Mergers and Acquisitions

Conclusion for an Analysis of Mergers and Acquisition

From the above, an analysis of Mergers and Acquisition can be understood. Mergers are classified when two or more entities combine their resources to form an entity. They enjoy the benefits of support and added technologies. Before a merger situation, the companies have to consider which merger would be more resourceful. When it comes to acquisition, a company has to weigh the advantages and disadvantages of a particular acquisition and carry out the transaction. Both share sales, as well as asset sale, have their advantages and disadvantages. From the above analysis of mergers and acquisitions, both operations are different in the form of ownership structure, parties involved, and acquiring interest.

Merger or an amalgamation is considered as a situation where the business of two or more entiti...