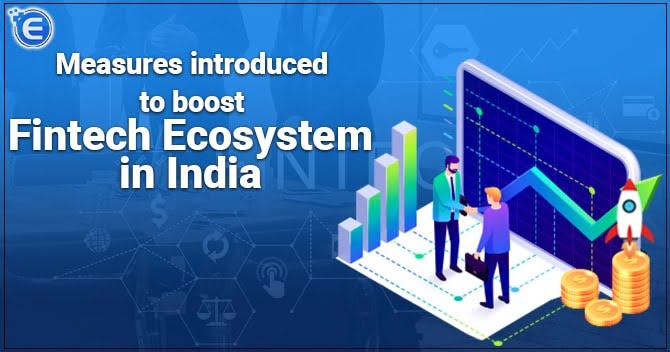 The word ‘fintech’ means ‘financial technology’. Fintech term was coined in the 21st century to describe technology used in the back end systems of established financial institutions. Fintech helps companies, business owners and users to manage their financial operations and processes.

Growth of Fintech ecosystem in India

India enjoys a great place in the global digital market. It has a fintech adoption rate of 87% as against the global average of 64%. India has a huge number of smartphone users which runs into millions. Further, there are more than 1 billion telecom subscribers as of March 2021. Also, there has been a significant rise in the digital payment transactions in India.

India is placed third globally in respect of start-up ecosystem. Various fintech companies have become unicorn with a valuation of more than 1 billion dollars. Over the years, the government has taken numerous initiatives for the fintech ecosystem in India that has resulted in the overall growth of the Digital ecosystem in India.

Fintech ecosystem in India: Measures taken by the government

The Ministry of Commerce and Industry, in a statement given as a written reply, highlighted the following measures:

It is a scheme which allows new bank account enrolment of beneficiaries for the transfer of direct benefits and helps in accessing various financial services applications.

With the help of Aadhaar, one can access Aadhaar enabled payment system. Aadhaar enabled payment system allows individuals to transact on a micro-ATM by furnishing their Aadhaar numbers and verifying it by scanning their fingerprint or iris. Aadhar payment bridge system facilitates operations from Aadhaar linked bank account with the help of biometric authentication.

Various authentication solutions have been introduced, like digital KYC, digital signature on documents, and video-based identification process. It has helped in creating different safeguards for not only customers but also for fintech start-ups.

The government has introduced a central repository called CKYC to reduce the issue of going through multiple KYCs for various financial institutions.

The customer onboarding costs has reduced significantly, which has caused improvement in the access of financial services to the rural India.

By setting up of payments bank and extending licenses to payment banks, the government has sought to push for financial inclusion. Additionally, the RBI has increased the maximum end of day balance for payment banks to 2 lakh rupees.

The Reserve Bank developed a Payments Infrastructure Development Fund[1] (PIDF) scheme. It was introduced to subsidise the deployment of payment acceptance infrastructure in Tier 3 to Tier 6 centres.

It is a societal initiative which sought to build public digital infrastructure to promote public and private digital initiatives, including rapid adoption of technology in finance.

The statement issued by Ministry of Commerce and Industry stated that the government has also put in place various measures for start-ups and the government is also working towards reducing compliance burden to spur investment in India. Based on the data put up on regulatory compliance portal, close to 25000 compliances have been cut down by the central ministries and departments and states/UTs combined.

Fintech Sector has a great potential in India, aided by an enabling policy and a digital infrastructure framework. The pandemic has accelerated digitalisation across the full breadth of the financial services sector. Not only banking but the insurance and investment sector is also evolving owing to fintech. The Indian fintech market is predicted to grow multi-fold in the future years with increased investment on technology, talent and innovation.

Catch-Up on All Things Fintech

The term FinTech has grown from being a catchphrase among tech-savvy business executives to an...

FinTech banking can be a solution to difficulties associated with traditional banking methods....