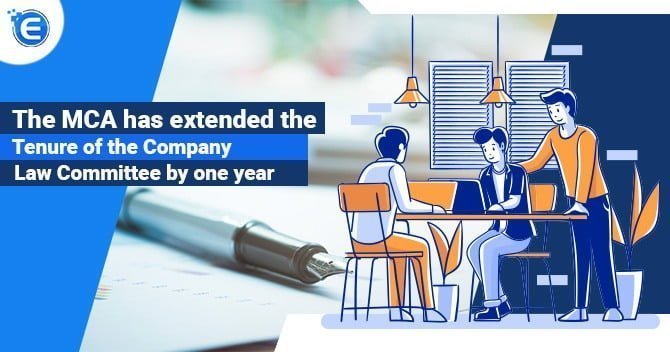 The tenure of Company Law Committee has been extended by the Ministry of Corporate Affairs (MCA) for another year, until September 16, 2022. The committee is currently chaired by Corporate Affairs Secretary Rajesh Verma.

The committee was formed in 2019 and currently has 11 members. It was designed to:-

As per the order:-

On August 27, 2018, the Committee’s report was delivered to the Minister of Corporate Affairs. The report offered suggestions, among other things, for reclassifying some offenses as “civil wrongs,” de-clogging the NCLT, and touching on certain critical components of corporate governance. The Companies Act, 2013, was  amended in accordance with the Committee’s recommendations and the passing of the Companies (Amendment) Act, 2019.

In keeping with the Government’s goal of promoting Ease of Living in the country by making it easier for law-abiding corporations to do business, fostering improved corporate compliance for stakeholders at large, and addressing emerging issues that affects the functioning of corporates in the country, it has been decided to form a Company Law Committee (CLC) to examine and offering suggestions to the government on different laws and concerns concerning the implementation of the Companies Act of 2013 and the Limited Liability Partnership Act of 2008.

“The ministry stated in a September 23 order, “The tenure of the Company Law Committee is now further extended by 1 year from the expiry date of the previous order, i.e. until 16.09.2022”.

It may be noted that the MCA established an 11-member CLC last year, chaired by the MCA Secretary.

The panel consisted of:-

Over the last several years, the government has focused on increasing the ease of doing business in the state, even amending the company legislation to re-categorize specific company law offenses as “civil wrongs” and de-clogging the National Company Law Tribunal (NCLT).

The Committee’s Chairperson may additionally invite or co-opt any other practitioners, specialists (subject-specific) with expertise or experience in corporate law, as well as representatives from other Ministries or regulators. As part of its discussions, the Committee may also confer with additional stakeholders. The Committee will get legal research support from M/s Vidhi Centre for Legal Policy, a non-profit organization.

The extended tenure of the Company Law Committee circular could also be viewed on the official MCA website: https://mca.gov.in/


Read our article:MCA extends the deadline for submitting the Cost Audit Report to the Board of Directors

The Companies Amendment Bill, 2017 was introduced in Lok Sabha on March 2016 and the...

MCA Relaxation on holding of AGM am...

In a massive relief to the companies, the Ministry of Corporate Affairs (MCA) vide general circ...

All you need to know about Filing F...

Form CSR-1 has to be filed with the Registrar of Companies (Ministry of Corporate Affairs) for...