MCA Relaxation on holding of AGM amidst Covid-19 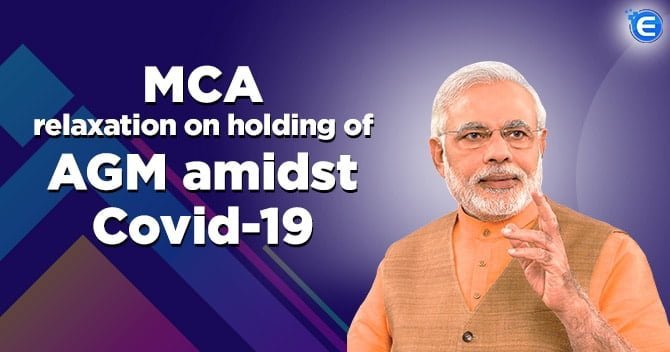 In a massive relief to the companies, the Ministry of Corporate Affairs (MCA) vide general circular No. 18/2020 eased rules on holding Annual General Meeting (AGM) on 21st April 2020. The relaxation was made owing to request made by several companies seeking leniency in the AGM rules due to the social distancing and lockdown rules followed across the country due to Covid-19. The MCA allowed companies whose financial year has ended on December 31st, 2019, to hold their Annual General Meeting within the first nine months of their current fiscal or before September 30, and thus it shall not be considered a violation under the Companies Act. The relaxation on holding of AGM has been widely welcomed by the companies and the stakeholders.

What provisions are provided under the Companies Act, 2013, for holding AGM?

Section 96 of the Companies Act, 2013 specifies the provisions related to holding of AGM. It provides that except in the case of the first Annual General Meeting, a Company has to hold AGM within six months period from the date of closing of the financial year. In the case of the first AGM, the company must convene such a meeting within nine months from the date of closing of the first financial year. A Company may hold its AGM by providing 21 days advance notice to all its members. Under the Companies Act 2013, a company must hold its Annual General Meeting within six months from the closing of the previous financial year, and it must not be held beyond 15 months of the last AGM.

Need for such relaxation on holding of AGM

The relaxations in the AGM rules were entirely necessary, and the government took cognizance of the seriousness of the matter and eased the rules. The way things have unfolded in the last one month due to the pandemic Covid-19, the Government considered the request of many companies for leniency in the AGM rules. The pandemic has caused an unprecedented situation in the country where the whole country is following social distancing and lockdown. In such a situation, it is a tedious task for companies to hold Annual General Meetings. Therefore, considering the requests of the stakeholders and the hardship caused by the pandemic, the ministry set out the circular of relaxation on holding of AGM.

Essential elements of the circular issued by MCA

The official notification in this regard is as follows:

All about the Amendments in Custom...

India’s Finance Minister presented the Budget for the Financial Year 2021 – 22 in the Lok S...

The Ministry of Corporate Affairs recently amended the One Person Companies Rules after the ann...