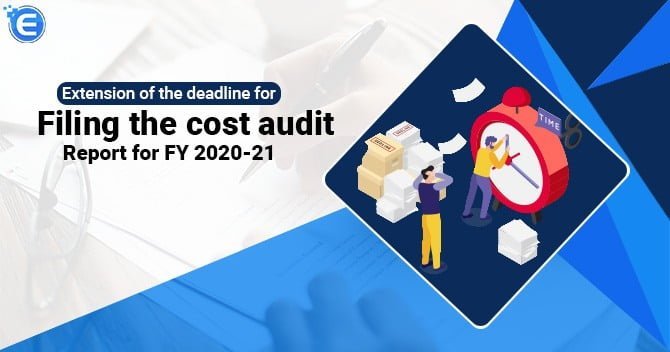 What is Cost Audit Report

Cost auditing is the practise of verifying a company’s cost accounts to assess the authenticity of cost accounting data. The cost audit report would confirm if the cost accounting records are in accordance with the costing principles, goals, objectives, and processes.

The following processes are often included in an audit:-

The Ministry of Corporate Affairs has extended the deadline for submitting a Cost Audit Report (CAR) to the Board of Directors as per Rule 6(5) of the Companies (Cost Records and Audit) Rules, 2014, in its General Circular dated September 27, 2021.

As a result, the cost auditor may submit the CAR for the financial year 2020-21 to the company’s Board of Directors by October 31, 2021, and it will not be deemed a breach of rule 6. (5). According to regulation 6(5), the report must be filed by a cost auditor within 180 days of the end of the fiscal year, which is September 27th each year.

As a result, firms must file the CAR in e-form CRA-4 within 30 days after receiving a copy of the CAR from the cost auditor. Yet, because businesses have been granted a general extension to hold AGMs under Section 96(1), e-form CRA-4 may be filed during the consequent longer time of submitting financial statements under Section 137 of the Companies Act, 2013.

(5) Each cost auditor must submit his duly signed report to the company’s Board of Directors within 180 days at the end of the fiscal year to which the report pertains, such report shall be considered and examined the Board of Directors , especially any reservation or qualification contained therein.

(6) Within 30 days of receiving a copy of the cost audit report, every company covered by these rules will furnish the Central Government with such report, alongwith full information and explanation on every reservation or qualification enclosed therein, in Form CRA-4 in Extensible Business Reporting Language format, in the manner specified in the Companies (Filing of Documents and Forms in Extensible Business Reporting Language) Rules, 2015 in addition to the charges outlined in the Companies (Registration Offices and Fees) Rules, 2014.

Companies that are required to conduct a Cost Record Audit

The following companies must file the Cost Audit Report on Form CRA-4 with the government:-

The below mentioned companies are excluded from performing a cost record audit:-

The extended deadline for filing Cost Audit Reports circular could also be viewed on the official MCA website: https://mca.gov.in/

All you need to know about Form AGI...

Recently, the MCA (Ministry of Corporate Affairs) has implemented new rules for the takeover of...

Corporate Social Responsibility for companies has been governed through the provisions of Compa...