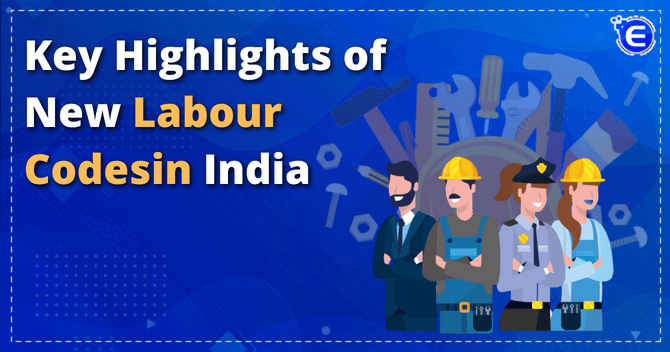 Amendments in labour legislation have become necessary in order to adapt to the changing dynamics of the nation. In lieu of the same, the Government of India has introduced four new labour codes to ensure the welfare of the industrial workers and boost the country’s economic growth, intending to promote a prosperous, empowered and Aatmanirbhar India.

This article focusses the Key Highlights of the New Labour Codes in India to provide a clear view of the various features of the four legislations.

What are the New Labour Codes in India?

There are four new Labour Codes in India that are –

What are the objectives of the New Labour Codes?

The new labour laws are formulated with the following objectives –

The key highlights of the New Labour Codes in enumerated below –

The code is applicable to all employees employed in any sector or industry, and the Central Government would make the wage-related decisions of the employment, which would include mines, oil fields and railways. The State Government will make all other employment decisions.

The key highlights of Minimum wages Code 2019 are –

The Occupational, Safety, Health and Working Conditions Code, 2020, aims to provide a safe working environment for workers. It consolidates 13 labour laws ensuring occupational health and safety at the workplace.

The features of this Act are –

This code subsumes 3 labour codes and aims to simplify the compliance procedure and promote ease of doing business together with safeguarding the interests of the trade unions and workers. It also ensures avoidance of any disputes between workers and industrial units in future.

The code applies to establishments according to the formation of unions and committees.

It is mandatory to approach the grievance redressal committee in case of any grievance, and the inquiry and investigation for the same must be completed within 90 days.

The Social Security Code, 2020 is constituted after combining 9 of the previous legislation and seeks social security provides access to various security schemes, which include but are not restricted to pension, maternity benefit, gratuity, and insurance to all the employees and workers irrespective of whether them being in the organised or unorganised sector.

Status of the Implementation of the New Labour Codes in India

The new Labour Codes were supposed to be implemented on 1 July 2022; however, the delay in implementation is considered a preparatory step for –

The above article helps to conclude that the New Labour Laws are drafted meticulously to ensure the welfare of the employees. But it is essential to acknowledge that the subject of employee welfare’ is closely connected to the health of the nation. The unnecessary delay in implementation of the same and uncertainty about the ‘Effective dates’ can adversely impact the gains for the employees and most likely make it difficult to adopt the same by the industries in a well-timed manner.

ESIC Return and other Annual Compli...

What are ESIC Return and other Annual Compliances? ESIC Return Employee State Insurance (ESI) i...

Meaning and Concept of Human Resour...

The recent trends in labour laws have led to a drastic shift in the overall perspective of the...

How to Maximise PPF returns accruin...

While investments in the stock market are accompanied by trepidations concerning the wild swing...