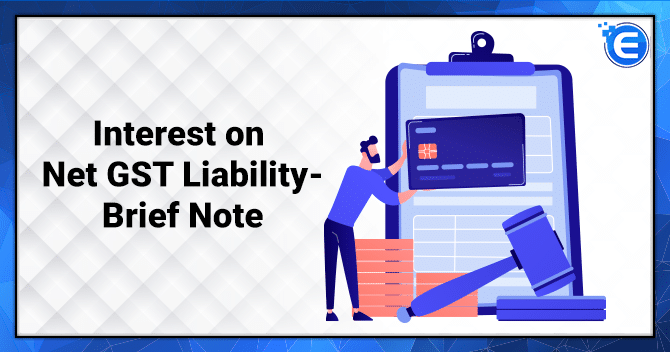 The liability of interest for any delayed payment is an economic consequence. The tax laws are not exempted from this rule as GST law provides for interest at 18% on delayed payment of tax after the due date. In this article, we shall discuss interest on net GST liability.

According to Section 50 of the Central Goods and Services Tax Act,2017[1], every person who is liable to pay the tax as per the provisions of this Act or the rules made thereunder but fails to pay tax or any part thereof to government within the prescribed period, shall for the period for which tax or part remains unpaid, pay on his own interest at such rate, not more than 18% as notified by the government on council’s recommendations.

As per this section read with notification number 13/2017, it can be stated that in case where a supplier who is liable to pay the tax under this Act but fails to pay the tax to the government. Supplier is required to file Form GSTR-3/ GSTR-3B, and the last date to file this form is 20th of the next month therefore, he is required to pay tax to the government before this due date.

However, in case the supplier fails to pay the tax up to the prescribed time limit, then he is liable to pay interest (18%) for which tax or any part remains unpaid.

The proviso to section 50(1) states that interest should be calculated on the portion of tax which is paid through cash ledger. This means that interest should be calculated on the amount of cash ledger, which is net GST liable to be paid after deduction of the eligible ITC. There is an exception to this that if the return has been furnished after the initiation of proceedings under Section 73 and 74 for the relevant period, interest shall be payable on gross tax liability.

Currently, the interest is not auto computed on the GST portal; therefore should be manually declared by the taxpayer. Some of the taxpayers had paid interest on net tax liability instead of gross tax liability. Hence, authorities issued notices based on the CBIC’s chairman.

Madras High Court, in this case, held that interest can only be imposed on the overdue cash component of GST liability and not on input tax credit; thus, interest should be charged on net basis.

In this case Telangana High Court took a very different stand and stated that until a GSTR-3B is filed by self assessment, a taxpayer is not entitled to such input tax credit in the electronic credit ledger. Accordingly, the interest shall be paid on gross tax liability.

The government has proposed an amendment in the GST law vide Finance bill 2021 and has clarified that the interest on net GST liability with retrospective effect is set to get a legal backing.

Clause 103 of the Bill proposes to amend section 50 of the CGST Act to substitute proviso to the sub section (1) with retrospective effect from July 1, 2017.

Now the interest has to be paid on the net tax liability if the person has not been issued any show cause notice under Section 73 or 74.

If taxpayers don’t want to get caught up in any litigation, they should file return on time, and in case there is some delay, they must pay tax with interest on net tax liability in order to avoid litigation. In case there is an issue under Section 73 and 74, then this provision shall not apply.

A notification was issued on 25 August 2020 that provided an appointed date as 1st September 2020 for applicability of interest. Taxpayers alleged that this notification was against the recommendations provided by the council. Therefore it was decided that interest will be recovered only on the net cash tax liability for the period 1st July to 31st August 2020.

The Central Board of Indirect Taxes and Customs added that where Show Cause Notice (SCN) is issued on gross tax payable, it should be kept in Call book until the amendment in Section 50 of the CGST Act is done.  Call book cases are those SCN that can’t be immediately adjudicated due to some reasons, and adjudication is kept in abeyance. For more information on Net GST liability, you can contact a GST professional.

Read our article:Can GST dues be paid in instalments?

Originally when the Goods and Service Tax Act, 2016[1] was implemented, GST rates structure was...

Under Section 61 of the CGST Act 2017, a proper officer can scrutinize a return and related par...

Uniform GST Rate for Lotteries at 2...

Lotteries will now attract a uniform Goods and Services Tax (GST) from 1st March at 28 percent...