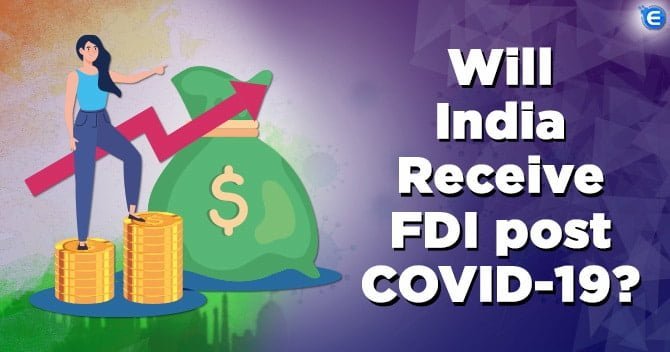 To critically analyze the above, it is essential to know the regulatory requirements for FDI, market trends, and government factors. Every individual is hearing about Covid-19 affecting domestic markets and rattling the economy. This is not only present in India, but the whole world is facing a similar crisis. The business world will be pondering over the thought of FDI post COVID-19 situation.

Foreign Direct Investment (FDI) is a debatable topic for foreign investors, businessmen, start-ups, and joint ventures in India. Even the Government of India (GOI) depends on foreign direct investment. Hence, it is relevant to understand the regulatory compliances for receiving FDI in India. The regulatory norms for FDI post COVID-19 would not change to an extreme level.

Foreign Exchange Regulation in India is governed by the Foreign Exchange Management Act, 1999 (FEMA). The primary regulatory authority for foreign exchange is the Reserve Bank of India (RBI). Apart from this, the Department of Promotion of Industry and Internal Trade (DPIIT) is another authority that governs international and foreign exchange transactions that occur in the country.

Routes for FDI in India

The Government of India (GOI) and RBI have introduced different routes for foreign investment in India.

The following are the routes for foreign investment in India:

Though COVID-19 has drastically affected the economic outlook of the country, the regulation of FDI post COVID-19 has not fully been amended.

The Covid-19 pandemic has caused major changes to economies of the world. India is also majorly affected by the changes caused due to this virus outbreak.

Some of the changes carried out by government/ financial authorities are as follows:

This is the general scenario that is happening across the world. In India, the Government and the RBI have made changes to the Monetary Policy of the country. These changes were carried out to inject liquidity into the economy. However, the situation for FDI post COVID-19 would remain unchanged.

The following amendments were carried out by the Government for FDI post COVID-19:

Questions to be asked due to FDI post COVID-19 amendment

From the Government point of view, this amendment is beneficial for the economy. This amendment would improve the GDP (Gross Domestic Product) of India. Indian consumers would utilize products and services made by Indian manufacturers.

However, the following questions will be asked by interested market participants:

To answer the above questions, it is important to understand the relevant regulatory environment and market factors that affect India.

1. Will this amendment affect FDI, which has already been discussed between two governments?

This amendment was carried out by the Government of India just to add a layer of scrutiny to the existing regulations. At the same time, the Government has made it clear that this regulation would not affect contracts or investments which have already been decided by parties.

The Covid-19 Pandemic started in December 2019. Till December 2019, India received around USD 8 billion of foreign direct investment from China. This move will not be problematic to previous investments which have already been decided by the Government of different countries.

To understand this, take the Chinese Automobile Industry. Shanghai Based MG Motors and Great Wall Motors have already signed off investment agreements with India. Even companies such as Changan and Cherry have considered India as an investment hotspot.

Moreover, government and commercial contracts entered into by these countries would not be affected by a force majure clause. Hence, it is evident that investment plans already discussed between the governments would be affected. FDI post COVID-19 would be allowed for these plans. FDI post COVID-19 will only be problematic for prospective investments.

2. What would this amendment do to future commercial/ government contracts?

The amendment in FDI (FDI post COVID-19) would only apply to future FDI from neighboring countries.  Many legal and regulatory experts have recommended that the decision taken by the Government of India is commendable. This is more of a nationalistic approach to investments in India.

However, the majority of interested parties have not welcomed this decision. Foreign investors from neighboring countries are against the decision made by the Government of India. China has given comments that this decision goes against the World Trade Organisation (WTO) norms.

Due to the Covid-19 outbreak, foreign countries such as Australia, the UK, France, and Spain have amended their FDI policy. These amendments have been considered by developing nations to protect their sovereignty. Therefore the amendment made by the Government on the FDI policy is a temporary measure. The situation will not be the same in the year 2021 or 2022.

However, FDI post COVID-19 is debatable due to this amendment. Companies that overlook India as a place for investment would go back on their words on investing in India. Apart from this, many Chinese Firms have commented that FDI post COVID-19 will significantly affect the country.

FDI post COVID-19 would increase the time of securing any form of approval from the Government of India. Moreover, securing such approval will be a long process due to a significant amount of bureaucracy in India.

Though securing government approval will take months, it has not affected the investment plans of Chinese companies. Chinese automakers have already planned budgets for foreign direct investment in India (FDI post COVID-19).

3. How would it affect foreign investors?

Though countries are affected, they are not affected to a drastic level. The disadvantages of sourcing an investment through the government route would only be a long process. Apart from this, there is no other disadvantage which affects foreign investment.

Many new companies, tech start-ups, and unicorns in India, such as Ola, Swiggy, Paytm, and Zomato, depend on series funding from foreign investors. These start-ups have been backed majorly by Chinese investor companies such as Tencent, Alibaba, and Ant Financial. Moreover, various start-ups require immediate funding to carry out various activities.

Therefore, these start-ups would have to wait for securing funds from China. They would have to depend on other sources for funding their start-up, which would be added expense in terms of business development and marketing.

However, the amendment of the FDI policy does not restrict any investment from the countries that share land borders with India. It is just a restrictive measure to deter any form of hostile takeovers from foreign companies. Investments from Chinese and neighboring countries that share land borders with India would not be affected in the long term. Only short term investments which are required immediately by the company would be affected.

4. What would happen to start-ups and major unicorns depending on this form of investment?

As mentioned earlier, start-ups and unicorns depending on this form of investment would have to either wait for the approval to come through from the Government of India. During the waiting period, these start-ups can form investment proposals with governments of countries that do not share land borders with India.

However, this would be a significant disadvantage to the start-up as unnecessary expenditure would be wasted on business development and marketing. Start-ups and unicorns would have to use alternative sources of investment from the domestic market. This would directly improve the domestic economy on a global front.

5. Is this a temporary step or a permanent step made by the Government?

The FDI amendment policy was carried out by the Government of India post the acquisition of more than 1% of the shares of HDFC Bank by Bank of China. From precedent, India has taken a defensive stance to protect the nationalistic interests of the country. This move will improve domestic manufacturing, domestic competition, and development of markets in India.

This measure has been taken by developed economies such as Australia and the EU. India is one of the largest recipients of FDI. In 2019 India was ranked for FDI in ninth place in comparison to 12th place in 2018. Hence all these factors would not the amendment of FDI law as a permanent decision.

As per a report made by the United Nations Conference on Trade and Development (UNCTAD), India would continue to receive foreign investment despite all the amendments and measures to protect their national identity. India’s growth is considered as a driver for foreign investment in the country.

India will receive a specific amount of foreign investment from other countries. However, the amount of FDI in India would deplete due to the ongoing pandemic. FDI post COVID-19 pandemic would not be affected permanently. FDI due to the COVID-19 scenario has dropped to about 40% in 2020. In 2019, the amount of FDI received was 1.54 trillion.

Hence the decision to amend foreign direct investment from neighboring countries would only be temporary.

Covid-19 pandemic has affected all businesses around the world. It has not only affected businesses but also affected different regulatory regimes in the world. FDI post-COVID-19 would not be affected due to the factors that make India a global attraction. Investment in specific sectors such as software, construction, and real estate is at its peak. FDI would come through in these sectors. The Government’s decision to amend the law for FDI from neighboring countries is only temporary. Countries that invest in India would continue to move forward with their plans for investment.

Overview The investment by foreign entities has significantly improved in the last few years in...