Capital and Current Account Transactions under FEMA: An Overview 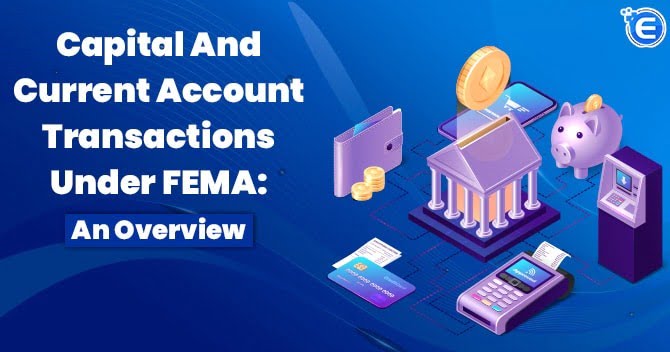 While working on different kinds of transactions involving investments, acquisitions, residents, non-residents etc., it needs to be checked whether such transactions are permissible under the framework of the Foreign Exchange Management Act (FEMA), Foreign Exchange Management Rules and other related notifications, circulars, notices etc. Since law cannot provide every permissible and impressible transaction so the law has made things simpler by classifying every such transaction into two broad categories of Capital and current account transactions under FEMA.

Though the above definition is easy and simple enough to understand, but applying the same is not an easy task because of subjective interpretations of the definitions of both capital and current account transactions.

A current account transaction has been defined as a transaction other than capital account transactions and includes transactions such as payments which are due in connection with foreign trade, other current business, services, short term banking and credit facilities taken in the ordinary course of business, payments which are due as interest on loans and also as net income from investments, remittances sent for the living expenses of parents, spouse and children who are residing abroad and also the expenses in relation to education, foreign travel and medical care of parents, spouse and children.

A capital account transaction is a very subjective definition and comprises of such transactions which alter the ‘assets’ or ‘liabilities’ and also includes ‘contingent liabilities’ of both non-residents in India and residents outside India. Section 6(3) also provides for the regulated capital account transactions such as transfer or issue of any Indian security by a non-resident, transfer or issue of foreign security by an Indian resident, borrowing or lending etc.

It must be noted that the terms such as “assets”, “liabilities” and “contingent liabilities” have not been defined under FEMA making it difficult to determine whether a transaction constitutes a capital account transaction or not. A quick response to find the meaning of the said terms is to look for their meanings in the accountancy practice. However, RBI has not prescribed whether the said practice would be right approach to determine the meanings of these terms.

Residential Status under FEMA and F...

Determining the period in which an individual stays outside India is crucial for compliance und...

Prior to economic reforms and liberalisation in India, foreign companies were not allowed to se...

Compounding of Contraventions under...

Compounding refers to settlement of the offence committed by the contravener by imposing moneta...