An Establishment of Branch Office (B.O.) / Liaison Office (L.O.) / Project Office (P.O.) or any other place of business in India by foreign law firms 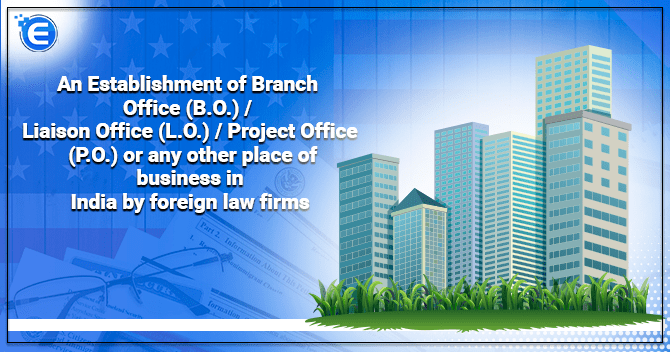 India has been a hotspot for foreign companies in India. With the fast-growing economy and increasing globalization, there has been an increase in the foreign multinational companies in the form of Liaison office, branch office or project office of the foreign holdings in India.  India has the finest and cheapest labor around the globe. Foreign offices are promoted in India.

The foreign entities are considering various methods to establish their entities in India, by making subsidiaries in India with a foreign company is holding; they are establishing, such as Branch Office, Liaison Office, and Project Office or any other place of business in India by foreign law firms.

As per the Master Circular of RBI, a Liaison Office can only undertake Liaison activities. It acts as a communicator between the Principal Office and Parties in India. It is not allowed to undertake business activities of itself in India and earn income through it.

The expenses of L.O. are met through Foreign Exchange from Head Office in India. The role of L.O. is limited to the extent of collecting information about the product market and customers in India and providing the information to the company.

The time-period is 3 years initially, for the opening of L.O. in India, which may be extended from time to time by AD Bank-I.

It is a business place in India, which acts as a channel between the principal office/head office and entities placed in India. The Liaison Office cannot undertake any commercial/trading/manufacturing activities directly or indirectly. It maintains the business in India through Inward remittances received from abroad through the ordinary course of the banking channel. It is establishing a communication between the head office and entity placed/subsidiary of that holding of the foreign company in India.

A branch office can do the same activities as the principal office/holding company but is not permitted to do manufacturing.

A Project office is the one that represents the interest of a foreign company while executing a project in India but excludes the liaison office.

General criteria of the applicant

Once the category above is satisfied, the applicant has to submit the application, in the FORM-FNC to designated A.D. Category bank, with the following documents/ papers:

Every LO /BO/PO has a validity period, which continues for 3 years for L.O. Whereas, for NBFC’S and other construction & developmental sectors it is generally 2 years.

As per the master Circular of the RBI dated of November 23, 2020, that no new permission or the renewal of license is granted by the RBI or A.D. Category Bank-1to any foreign law firm to open the LO/BO/PO in India.

The above circular or notification is the result of rulings given by the Supreme Court in the case Bar Council Of India Vs. A.K. Balaji And Ors. (Supreme Court)

Issue – According to the Advocates Act, a foreigner is not allowed to practice as per the bar contained in Section 29. Under the concept of LPOs, where they are; conducting seminars and arbitrations, foreign lawyers are visiting India on Visitor Visa and practicing illegally. They have been violating tax and immigration laws. They have opened their offices in India for practice in the fields of mergers (M&A), take-overs, acquisitions, amalgamations, etc.. Still, the disciplinary jurisdiction of the Bar Council extends only to advocates enrolled under the Act.

In the given case, the Supreme Court has held on whether the foreign law firms are permitted to practice in India, this has come as a result of the Madras High Court judgment. They Are Not Allowed covering from the Para 63 in it, which questions the practice the profession of law’ includes only litigation or non-litigation practices also. Those foreign law firms are permitted to practice in India only after fulfilling the requirements under the Advocates Act, 1961 and Bar Council Rules. There is a bar on said law firms, or lawyers to visit India, on a ‘fly in or fly out ‘basis for giving legal advice regarding foreign law on diverse international legal issues.

Coming of Unicitral Model of Law

The UNICITRAL (United Nations Commission on International Trade Law) was adopted in 1985. It is the Model Law on International Commercial Arbitration. The Arbitration and Conciliation Act is, consolidated and amended to the law relating to domestic and international commercial arbitration which is for the enforcement of a foreign arbitral award. The Act was enacted as a measure of fulfilling India’s obligations under the International Treaties and Conventions. On account of the growth in the international trade and commerce and also on account of long delays occurring in the disposal of suits and appeals in courts, there has been a tremendous movement towards the resolution of disputes through the alternative forum of arbitrators.

According to the Court of Appeals of the State of New York, which dealt with a case where a Mexican citizen and lawyer, who was neither a citizen of the United States nor a member of the New York Bar, maintained his office in New York and advised members of the public on Mexican law. He did not give any advice, or his law firm was not as to New York law. The majority of the court held that this was not permissible.

It can be well said that India has become the spot for foreign companies to invest and establish their LO/BO/PO in India. But the master circular of RBI for the establishing of LO/BO/PO for the foreign law firms is still not permitted in India. If they set their law firms, it has to be within the prescribed limits of our Act that is the Advocates Act, 1961, and Bar Council Rules. What has been excluded is that, the activities of legal acts which are outside the purview of our legislations will not be permitted.

If the foreign law firm comes on a “fly-in and fly-out basis” does legal activities regularly, it will not be permitted within the limits of our acts.

The Reserve Bank of India in a recently released notification announced the roll out of the Leg...

Compounding of offences under FEMA...

To settle a matter by a money payment in lieu of other liability means Compounding. This meanin...

In a major development, the Reserve Bank of India (RBI) announced the introduction of the Onlin...