Challenges of Enforcement of Foreign Arbitral Awards under FEMA 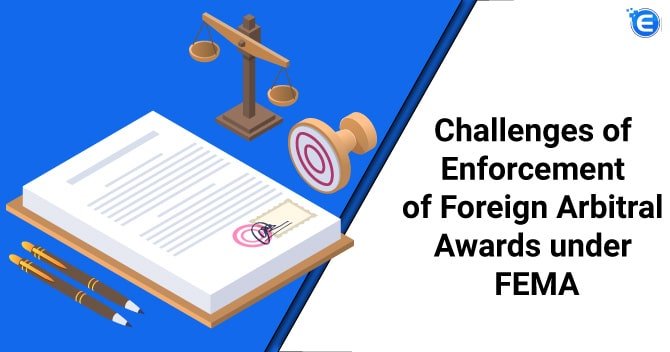 The New York Convention for enforcement of arbitral awards is an international convention, which is a successful milestone across the world. Member States who are a signatory of this convention would receive benefits of enforcing and challenging an arbitral award which is provided by a member country’s court. In this article, we will emphasize the fact of enforcement of Foreign Arbitral Awards under FEMA.

There were similarities between the A&C Act and the New York Convention. These similarities were seen when it came to comparing section 44- 52 of the above act and Article V of the New York Convention. Under section 48 of the act, the grounds for contesting the enforcement of foreign award are restricted. This would mean that enforcing foreign arbitral awards under FEMA would also be a subject matter of dispute. To critically analyse the enforcement of foreign arbitral awards under FEMA, we have to go back to the previous legislation.

Enforcement of Arbitral Awards under FERA

When we look at the Foreign Exchange Regulation Act, 1973 (FERA), this regulation was brought out when Indian outlook to develop foreign investment reserves was nil. The FERA was more stringent when it comes to policy formulation and regulation. Before FEMA, there were a lot of disputes when it came to enforcement of arbitral awards.

By a plain reading of the object of FERA, it is clear that during that phase, India was predominantly not promoting the development of foreign exchange in the country. Going by how the policy was depicted and made by the government of India, this regulation was stringent. Investments which were against the provisions of FERA were prohibited. In case a party takes a risk and carries out the transaction, then hefty penalties would be imposed by the central government and the RBI.

Due to this, the government with a notion of opening the free reserves and promoting foreign exchange came into the fact of economic reforms in 1991. From 1992, there were a lot of free-flowing investments in the country. However, there were still issues when it came to enforcement of foreign arbitral awards under FEMA. This was the same issue when arbitral awards were trying to be enforced under the FERA regulation.

Issues related to Enforcement of Foreign Arbitral Award under FEMA

The following issues related to enforcement of Foreign Arbitral Awards under FEMA are:

The RBI has brought out the foreign exchange management act, 1999[1]. After this, the RBI brought out a significant law which dealt with the Foreign Exchange Management (Transfer of Security to a Person outside India) Regulations, 2000. These regulations relate with the issue of security by an Indian company to a Non-Resident Indian or an individual resident outside India.

In 2014, the RBI brought out another circular regarding this, which allowed securities such as equity shares and preference shares to be transferred to a resident outside India. In this circular, one crucial point was mentioned. When securities were transferred to a person outside India, they would not have the option to sell it at their price. Hence, an assured price is not guaranteed during the time of the exit of the investor, and the price would be pre-determined by the parties (Put Option).

After this, another circular was brought out in July 2014, which allowed the transfer of securities particularly debentures outside India. The transfer would be subjected to the international pricing guidelines, which has to be accepted by the parties. This was being an issue when it comes to enforcement of arbitral awards under FEMA. There would be a clash when it came to enforcement of foreign arbitral awards under FEMA and the law under the A& C act.

Position during FERA (Enforcement of arbitral awards under FEMA)

In the decision of Renusagar (1994), the Supreme Court (SC) took into view where there was an issue regarding the enforceability of foreign award with the clash of the FERA. One of the issues raised and contended was from the Foreign Awards (Recognition and Enforcement) Act, 1961. This issue was about the enforcement of foreign arbitral awards. These awards, when enforced, are contrary to FERA and which directly would affect the public policy of the country.

We have to go deeper for interpretation of public policy under-enforcement of arbitral awards. To be against the country, the policy or the enforcement must go against the provisions of law that affect the particular country. The court said that the law should go against some law which affects the integrity and sovereignty of India.

Coming to a conclusion, the court considered that enforcing the foreign arbitral award would not be allowed only in the following circumstances:

A plain reading of the above interests suggests that enforcement of the arbitral award is only prohibited if it goes against the interest of the country and affects the public policy.

In another decision to understand the meaning of enforcement of arbitral awards, the court considered the case of LIC v Escorts Limited. In this case, the SC held that if the award goes against the national and economic interests of a country, then such award would not be enforced. Here the decision was given if the award was enforced, then it would go against the provisions of the FERA.

Position of Enforcement of Arbitral Awards during FEMA Regime

However, even though the markets in India were liberalised, the courts still have confusion when it comes to enforcement of foreign arbitral awards under FEMA. When interpreting the above regulation, it becomes quite unclear whether the breach of a contract or a private equity /shareholders agreement would affect the national interests of the country.

To understand this, it is crucial to go by previous judicial precedents:

In judicial precedents, many courts go at differentiating commercial law from constitutional and administrative law. This would be crucial for understanding the enforcement of arbitral awards under FEMA. When it comes to private equity agreements, then the parties have to refer the initial agreement in case of a dispute.

When looking at the initial agreement, the parties have to understand that enforceability of awards are different from breaches of a contract under section 73 of the Indian Contract Act, 1872 or a breach of warranty under corporate finance and private equity legislation.

Different courts in India have come across these situations which involve the lapse of commercial laws as well as constitutional laws.

In the decision of Shakthi Nath (2017), the Indian promoters agreed with the foreign shareholders for an investment. Under this shareholders agreement, the shareholders had to fulfil conditions within a specific period. The agreement wanted the Indian Promoters to acquire a share of the foreign company at a particular amount. Disputes arose between the parties and it was referred to an arbitral tribunal.

The Indian promoters contended that the provisions related to enforcement of arbitral awards went against the laws and circulars which were brought out by the RBI and FEMA.

Here the investors made it clear that, enforcement of remedies present in the contract was considered and no remedies for enforcement of arbitral awards under FEMA were considered. It is clear that if foreign investors would consider the exit options, then it would have breached the provisions under the FEMA. However, the court is of the opinion that even if there are minor breaches in FEMA, the enforceability of foreign arbitral awards under FEMA would not be affected.

In the case of NTT Docomo (2017), there was an agreement with Docomo and TTL (a subsidiary of Tata Group). This agreement stipulated certain provisions that if the conditions are not performed, then Tata, the Parent group must find a suitable buyer of the shares. Another condition was that the shares should be sold at a particular rate. In the agreement, Tata failed to find a suitable buyer.

Disputes arose between Docomo and Tata, which was considered in the LCIA (London Court of International Arbitration). There was a breach of contract, and the court considered to grant damages to Docomo. Tata contested the above fact that it was a breach regarding the provisions related to exit options. However, the court was firm in their decision that the breach was not related to FEMA, but it involved a mere breach of contract for which the parties had sued Tata.

From the above, it is clear that the courts are also supportive of the circumstance that enforcement of foreign arbitral awards under FEMA is separate from commercial laws.

Read our article:The Process of Claiming Damages for Illegal Termination of Work Contract

Compliance for Transfer of Shares u...

A company transfers shares to a shareholder on application. Similarly, the transfer of shares c...