Understanding the legal aspects of Adjudicating Authority under FEMA 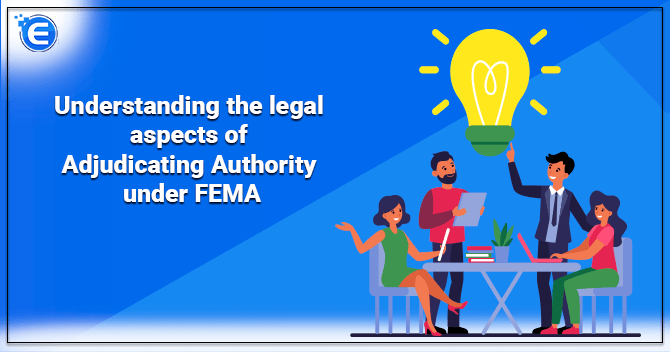 Every institution or an organization requires an adjudicating authority to function in accordance with the rules and regulations of such an institution. If you observe keenly, you would know that for every Act, there is an adjudicating authority appointed under the Act for the compliance of its rules and regulations. Likewise, the Foreign Exchange Management Act, 1999 provides for adjudicating authority for imposing penalties in case any person contravenes any rule, regulation, notification or order issued in exercise of the powers under this Act. In this article, we shall look at the Adjudicating Authority under FEMA and the provision of appeal that it provides, but before that, let’s have a brief understanding of FEMA.

Foreign Exchange Management Act, 1999 (FEMA) was enacted by an act of Parliament of India. It was enforced on 1st June 2000. FEMA was brought in with a view to promoting the systematic development and maintenance of a healthy foreign exchange market in India. It replaced the erstwhile Foreign Exchange Regulation Act, 1973 (FERA). Another reason to enact FEMA was to somewhat relax the control on foreign exchange in India.

Appointment of Adjudicating Authority under FEMA

Section 16 of the Foreign Exchange Management Act, 1999 (FEMA), provides for the appointment of adjudicating authority. It provides that-

Procedure for Adjudication by Adjudicating Authority under FEMA

The procedure of adjudication is as mentioned below.

Enforcement of orders of the Adjudicating Authority under FEMA

The provision followed for enforcement of orders of the Adjudicating Authority under FEMA is mentioned below:

It may be noted that if the amount mentioned in the warrant is paid to the officer in charge of the prison, then the person shall be released.

Appeal against the order of the Adjudicating Authority under FEMA

(i) To Special Directors (Appeals)

As per Section 17 of the Act, the Central Government must appoint Special Directors who will hear the appeals against the order of the adjudicating authority. It shall further specify the matter and places where such directors may exercise jurisdiction.

Any person who is not pleased with the order of the adjudicating authority may file an appeal to special directors under the Act. The said appeal must be filed within 45 from the date of receipt of a copy of the order by the authority.

It is essential to know that in case a person files appeal after expiry date, then it is upon the discretion of the special directors to admit the plea once he is satisfied that such delay was due to reasonable cause.

The special director may provide the parties to an appeal the opportunity to be heard on receiving the appeal. Then he may, if satisfied, pass an order confirming, modifying, or setting aside the order of adjudicating authority. A copy of such order should be sent to the parties to the appeal and also to the concerned Adjudicating Authority under FEMA. The special directors shall also have the similar powers of a civil court that are with the Appellate Tribunal.

Section 18 of the Act provides for the constitution by the Central Government of an Appellate Tribunal that would hear appeals against the orders of the adjudicating authority and the Special Director under the Act.  Further Section 19 of the Act provides that the appeal must be filed before it within 45 days period from the date of receipt of the order’s copy made by the adjudicating authority or the special director under the Act.

The appeal should be in Form II, and it shall be signed by the applicant. The appeal will be in triplicate by a fee of Rs. Ten thousand in either cash or DD payable to the Registrar of Appellate Tribunal of Foreign Exchange, New Delhi, provided that the applicant will deposit the penalty amount imposed on him by either Adjudicating Authority or the Special Director as the case may be to the authority as may be notified. In case the tribunal feels that the deposit of the penalty may cause hardship to the depositor, then the Tribunal may dispense with such deposit with certain conditions.

The appeal must set forth the grounds of objection to the appealed order concisely and under distinct heads without any argument of narrative. The grounds shall be numbered. It shall mention the address for service where the notice to the appellant may be served.

The procedure of appeal to Appellate Tribunal shall be in the following method:

Any person who is not pleased with the decision of the Appellate Tribunal may file an appeal to the High Court within 60 days of such decision or order.

FEMA facilitates the working of external trade and payments, thereby promoting the orderly development. Simply speaking, its aim is to maintain a healthy foreign exchange market in India. However, it requires an authority that shall handle the matters relating to contravention of the provisions under the Act. Therefore, the role of the Adjudicating Authority under FEMA becomes significant in the proper compliance of the regulations under the Act.

What are the things to carry out fo...

This article throws light on the things which is to be carried by an NRI during first visit in...

Compounding of Contraventions under...

Compounding refers to settlement of the offence committed by the contravener by imposing moneta...

RBI’s guidelines on Step Down Sub...

Over the years, the Indian industry has been building up its presence successfully abroad with...