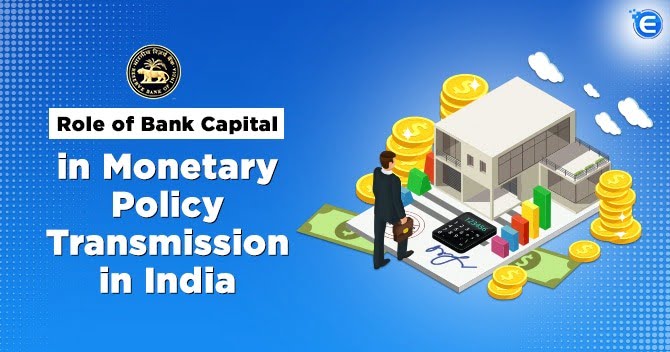 The predicament of the Non-Performing Assets (NPAs) has now become a great stumbling block in the Monetary Policy transmission in the Indian banking system. Hence, it has become a matter of frequent discussion and scrutiny. Undoubtedly, the problem of NPAs is not only hindering the banks’ growth but also adversely impact the whole economy. As a matter of fact, the level of NPAs in Indian banks is nothing but a reflection of the state of health of the industry and trade.

With a view to the study of the root cause behind the ongoing NPA crisis and to assess the role of the bank capital in the bank’s monetary policy, RBI has recently published a working paper titled ”Bank Capital and Monetary Policy Transmission in India”. The thesis has been prepared on basis of the views of the economic experts.

The study reveals that it is the high incidence of the troubling non-performing assets (NPAs) of various commercial banks, which poses a major hindrance in the transmission of RBI’s monetary policy. Eventually, it impedes the smooth working of the banking system and impacts the overall growth of the economy.

Let us briefly understand the concept of non-performing assets, in order to comprehend the degree of the NPA crisis in Indian banking system.

Commercial Banks extend loans & advances to their borrowers, which are assets for the banks. On the basis of the repayment status of the loans, they may be classified as follows:

Background of the RBI’s take on Bank Capital

As we know that the Indian banking sector is facing a logjam due to the onset of COVID-19. Noticing the continuously depreciating loan asset quality and diminishing banks’lending capacity, the Central government has recently infused new capital into the nationalized banks and PSBs. In a bid to heal the banking capital and boost credit extension, RBI had also postponed the implementation of the last round of the Capital Conservation Buffer (CCB) up to 1st April 2021. This was done to extend some relief to the commercial banks that are facing problems while raising further capital.

Although, some PSBs have benefitted from these reforms and they’ve revived from theRBI’s critical perspective, yet the growth of bank credit has declined from 13.4% in FY2018-19 to 6.1% in FY 2019-20.

Taking note of the abovepredicament, RBI has now carefully examinedtherole of bank capital in determining the monetary policy in India.

As per the RBI’s report, there are 2 different channels of banking activity that are impacted by the bank capital, which can result in monetary policy curbs on the credit supply –

It’s quite evident that RBI may decide to adjust the credit supply of banks by tightening the monetary policy. It may do so by either raising the CRRor raising the short-term bank interest rate. This restricts access of the general public to the loans and further reduces the number of bank loans.

The bank lending seems to be very simple channel, sometimes, yet there can be some regulatory frameworks by the RBI that might pose hindrances in this channel. One such regulation is the Basel capital regulation.

Under the current Basel-III(amendment) regulation, commercial banks were directed to maintain Capital to Risk (Weighted) Assets Ratio (CRAR) @ 8%and CCB @ 2.5%during the normal course of business. Whenever RBI implements such an expansionary monetary policy by reducing the rates, commercial banks find it difficult to channelize their funds to the private sector by extending loans. When the banks extend loans to the risky private sector units, the risk-weighted assets buildup more and this leads to reduced CRAR. Since banks face tight capital restrictions, they face scarcity of the regulatory capital requirement and will not be able to maintain CRAR.

Hence, the banks will shift from the private sector towards more risk-free investment channels such as government bonds. This phenomenon is called the capital threshold effect. This gradually hampers the credit availability and impacts the RBI’s monetary policy.

Before we understand the role of bank capital in deciding the monetary policy, we must know about the bank capital regulation in India.

After the Global financial crisis of 2008, the Basel Committee on Banking Supervision (BCBS) amended Basel II and introduced the Basel III regulation, which recommended maintaining of 8% CRAR. But it also changed the definitions of Tier 1 and Tier 2 capital:

This is a bank’s core capital including the disclosed reserves, which appear on the bank’s balance sheet, and the equity capital. This capital is used by a bank tomeet its day to day operation on a regular basis, and this is the basis of a bank’s solvency.

This is a bank’s supplementary capital. It includes theundisclosed reserves, subordinate term-loans, hybrid financial products, and other such items that make up these funds.

Till date, 1.875% of CCB has been met out of the total 2.5% requirement. The last round of CCB has to be attained by 1st April 2021, which seems almost impossible. If we analyse the past CRAR maintained by Indian banks, the left side plot in the Figure given below shows that till 2013, in the density plot, all the banks in the sample have CRAR beyond 8% as was recommended by BCBS. But after 2013, a downward fall in the distribution was seen towards the left-hand side. This can be noticed as below: –

This trend may be happened because of the adoption of Basel III requirements and resultantre-calculation of the Tier 1 &Tier 2 capitals.

CRAR distribution among the Indian banks

Apart from the above, there is another observation that the entire range of the CRAR distribution has been increased. Itis noticed that theCRAR distribution is at the restricted level for some PSB banks and is in excess for some Private banks. This can be seen easily on the right side of the plot shown below: —

So, here a question arises, whether this extreme capital in the private sector bank balance sheet is really helping in easy implementation of RBI monetary policy? The answer is no.

So far, RBI has followed lenient monetary policy since 2014 has repeatedly reduced the policy rates. To facilitate more liquidity into the banking system RBI has reduced the statutory liquidity ratio[1] (SLR) many times. Despite the expansionary monetary policy, the credit growth has not revived speedily during the past 6 years. This implies the weak transmission of the RBI bank lending channel of monetary policy.

The RBI paper reveals that there is a positive relationship between the bank equity capital and the credit growth. With this observation, there is now a need for a more focus on the countercyclical capital buffer (CCyB) for all the Indian banks. Only this can equilibrise their balance sheet against the potential losses arising from the shocks in the economic scenario while the depression phase.

The report concludes by stating that banks with more CRAR are having a less cost of funds. The pro-cyclical nature of leverage implies that the banks tend to provide credit during the phase of economic growth by raising debt funds (i.e. through deposits and loans). During this time, they do not use their surplus banking capital. Greater CRAR ratio boosts the bank lending channel and enables the RBI to smoothly implement the monetary policy. Here, the transmission of monetary policy has been very weak because the banks are facing the higher CRAR than the current requirement. The growing burden of the non-performing assets (NPA)with the banks is a major factor behind this, and this slows down the monetary policy transmission. Hence, the loan growth rate also reduces. According to RBI report, strong bank capital regulation is the need of the hour. Low CRAR of some banks is a great threat to the banking system and will also restrict the transmission of monetary policy. Hence, the Government of India should infuse more capital into the public sector banks, which is likely to control the situation

Mudit Handa is a keen and proficient writer & researcher in the field of business compliance, finance, and taxation. Having a strong command on a wide range of disciplines including Indian economy, trade & commerce, legal compliance, quality management, real estate and banking, Mr. Handa aims to impart useful business insights to the readers through his blogging skills.

The Reserve Bank of India issued a notification on 23rd March 2020 regarding the Priority Secto...

RBI Notification: Steps to Ensure A...

In the latest RBI notification, RBI has mandated banks to fully automate NPA classification and...

The loan moratorium permits deferment of loan interest servicing and repayment for a period of...