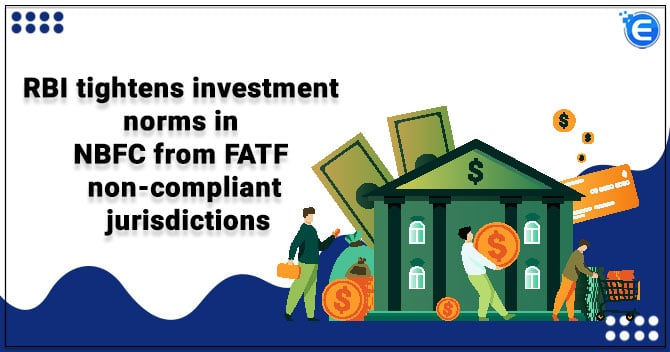 Recently the Reserve Bank of India came out with a notification to impose restrictions on investments in Non-Banking Financial Companies by investors from the FATF non-compliant jurisdictions. These restrictions shall be applicable from the 12th of February 2021. In this article, we will be discussing regarding the details of the notification released by RBI in this regard.

Background of the matter

The restrictions have come in the wake of increased scrutiny of the NBFCs after the collapse of certain entities and also to restrict money laundering. The Reserve Bank had started examining investments from Mauritius since last year and returned multiple applications by various NBFCs because of their connection with Mauritius.  This was due to the fact that Mauritius was put under grey list by the Financial Action Task Force in 2020 due to certain systematic deficiencies. These systematic deficiencies includes lack of access to accurate beneficial ownership information by the competent authorities, lack of capability of preventing money laundering, and failure of conducting financial investigations.

These steps from the RBI[1] caused a lack of clarity for the fund managers, and they were confused about whether to consider Mauritius while setting fund structures and how to work with the existing legacy structures. However, with the RBI notification/circular, the confusion has been put to rest.

What is Financial Action Task Force?

It is a global watch dog organization that looks to curb money laundering and terrorist financing. It was formed in 1989, and today it’s an intergovernmental organization with 39 members and affiliations from APG, CFATF, etc. The FATF has developed the FATF standards or FATF recommendations which ensure a co-ordinated response internationally to prevent organized crimes and terrorism. It has also been working to stop funding for weapons of mass destruction.

The RBI circular differentiates the investment based on pre-existing and new investors and provide different rules for both classes, and the restrictions imposed through this circular apply to the new investors only.

New investors from or through the Financial Action Task Force non-compliant jurisdictions would be prohibited from directly or indirectly acquiring significant influence in the existing investee NBFC and companies seeking Registration Certificate. The term significant influence is defined as having more than 20% of the actual as well as potential voting power. This prohibits new investors from Financial Action Task Force non-compliant jurisdictions from acquiring beyond 20% of the voting rights in the NBFCs.

The restrictions under the RBI circular pertaining to restrictions on investments in Non-Banking Financial Companies by investors from the Financial Action Task Force non-compliant jurisdictions shall not apply to the existing investments in NBFCs from FATF non-compliant jurisdictions. They have been also permitted to acquire additional investment to support their continuity of business in India. However, it is worth mentioning here that such additional investment should be as per the extant regulations.

The circular may lead to practical issues in ensuring compliance by listed NBFCs, and a particular mechanism could well be required to be developed to facilitate the same. The listed NBFCs should be mindful of the investments by already registered foreign portfolio investors from jurisdictions that were classified as FATF non-compliant. Such foreign portfolio investors could invest up to the sectoral limit of 100% in NBFCs and thereby breaching the limit set under the circular.

The Reserve Bank in the year 2020 had returned a few applications from private equity and venture capital funds in Mauritius for greenfield investments or acquisitions of Non-Banking Finance Companies on account of its FATF compliance status. The RBI circular (restrictions on investments in Non-Banking Financial Companies by investors from the FATF non-compliant jurisdictions) clarifies the position of law and sets out the restrictions, permits non-controlling investments, and exempts existing investments, including additional investment in NBFCs to support continuity of business in India. This clarity by the Reserve Bank regarding the restrictions is expected to benefit investors in structuring their entry to India, especially in the Financial Services sector.

Before Liberalised Remittance Scheme in India, permission had to be compulsorily taken from the...

The RBI recently announced the introduction of Internal Ombudsman Scheme for certain categories...