Impact of GST on IT Sector 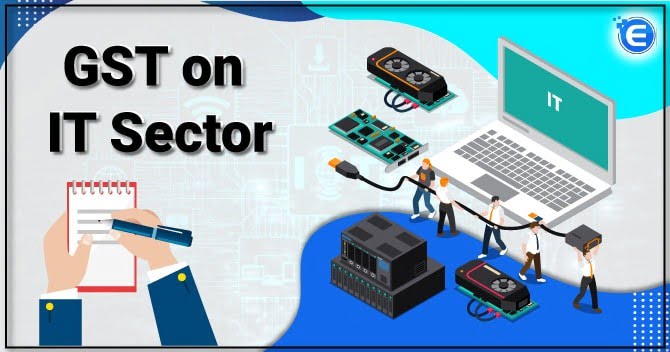 Since the Goods and Services Tax (GST) has been implemented in India it has majorly affected every sector in India, for some, it is a boon and for some it is a bane. One of the most reputed sectors is the Information Technology (IT) sector in India, which is also one of the highest contributors of GDP in India. However, it has been seen that the new taxation system has further simplified the tax structure in India by removing the cascading of taxes.

So now let’s understand how the implementation of GST has affected the IT sector in our country.

Under the old tax regime, the supply of the packaged software attracts both service tax and VAT[1]. The rate of vat was around 5%. In most of the cities and the rate of service tax was around 15%. Moreover, the excise duty is also applicable in the case of the manufacturing of IT Products.

For instance, if there is any software on the hard disk, DVD, or SD, then there will be 3 taxes applicable to it.

The following are significant changes in the tax rates of IT services and products:

Redesigning business software under IT sector

The biggest barrier in changing the IT system will require coordinating between the technology teams and tax experts. In many cases, some of the ERP software were provided by the major IT companies for updating and redesigning new GST rules.

Companies are mainly improving their enterprise resource planning (ERP) and the software related to accounting to facilitate the complexities of GST calculation.

GST on the IT sector in accordance with Place of Supply

Prior to the GST taxation, the IT service is being carried out only from one particular place, which was generally the main headquarters of the company.  Under the GST regime, however, a ‘Place of Supply’ provision is now initiated, which attracted the need of various invoices and billings in the case of single contract service. For this purpose, the Information Technology companies will have register to those states as well where the clients and where the customers reside.

GST on IT services or products

The rates of tax have witnessed a small spike after the implementation of the GST, but the good thing is the multiple taxes and cascading of taxes has been now removed. So now instead of excise duty + Service Tax + VAT on the purchase of the IT software service, the consumer will now only have to pay a single tax GST which is less or more a similar amount to the previous regime.

The E-commerce marketplace, which is a significant part of the IT industry of India, is also tackling major changes in the new regime of GST. The provision of GST requires online market places to now deduct ‘tax collected at sources’ that is the tax collected from the different IT sellers, and further deposited the same to the government. So, each seller has to file returns online and record if they wish to declare the credits on the TCS paid. This will affect their cash flow ability and investment. This will eventually influence the expansion of the IT sector and make the condition worse and also it can create a situation where the seller could even draw their hand from these online platforms to sell their commodities, but highly unlikely.

GST on IT for export of services

The receipts from the export of the Information Technology services are one of the significant sources of foreign exchange, with India being the chief exporter of the IT services. The exporters are zero-rated and the input taxes paid will be authorized as a refund.

So, the exporters must make sure that all the addresses of the service recipient can be showcased before the authorities on the request. The typical ITES/ IT will come under the ambit of software development, Software consultancy, BPO Operations etc. Apart from these activities, this rule will also supply services like intermediary services maintenance/software support as there is no exception under GST.

GST on IT for Freelancers

Any freelancers who are providing IT services including website designing, app development, designing etc, were earlier paid service tax of 15%, which is now increased to 18% under GST.

However, there is still doubt regarding the bloggers that they are taxable under the GST or not. Earlier, they were not liable to pay service tax and were not taxable. We hope that we will get clarity regarding the same from the GST council.

It is clear from the above discussion that the GST rates of the IT services have been increased to 18%, but is clear that the information technology will definitely benefit from the GST, all thanks to the huge boost in the sale of the software. Other factors such as, the availability of ITC will further bring down the operating costs. Thus, it will overall increase the gains of the IT sector.

Read our article:GST Impact on E-Commerce – The vision Behind it

In this blog, we will cover all the relevant provisions relating to aggregate turnover  Go...

All about Intrastate and Interstate...

The taxation system may be quite complex for some to understand due to the numerous legal forma...

Every taxpayer, after GST registration, who is required to deduct tax at a source und...