An overview of IAS 26 on Retirement Benefit Plans 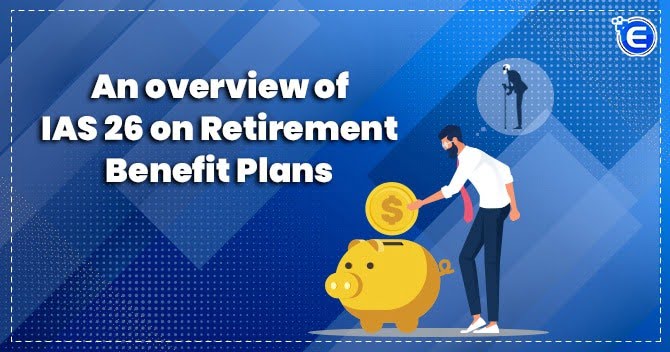 IAS 26 establishes the measurement and disclosure criteria for reporting retirement benefit schemes. All plans must provide a statement of changes in net assets available for benefits, a summary of major accounting practices, and a description of the plan and the impact of any modifications made during the period in their reports.

This Standard addresses the plan’s accounting and reporting to all members as a group. It does not address reports to individual participants on their retirement benefit entitlements. IAS 19 Employee Benefits is concerned with determining the cost of retirement benefits in the financial statements of businesses that have plans in place. As a result, this Standard supplements IAS 19.

Retirement benefit schemes can be either ‘defined contribution’ or ‘defined benefit’. Many necessitate the establishment of separate funds, which may or may not have a separate legal existence and may or may not have trustees, to which contributions are made and retirement benefits are given. This Standard applies whether or not such a fund is established and whether or not trustees are appointed.

The same accounting and financing standards apply to retirement benefit plans with funds invested with insurance firms as they do to privately funded arrangements. As a result, they are covered by this Standard unless the contract with the insurance company is in the name of a specific participant or group of participants and the retirement benefit obligation is entirely the insurance company’s obligation.

Other than employers, certain retirement benefit plans have non-employer sponsors; this Accounting Standard also applies to the financial statements of such plans.

The majority of retirement benefits schemes are based on written agreements. Some plans are informal, but they have gained a level of responsibility as a consequence of companies’ established practices. While certain plans allow employers to restrict their duties under the plans, it is normally difficult for a company to terminate a plan if workers are to be engaged. An informal plan is subject to the same accounting and reporting standards as a formal plan.

Many retirement benefit schemes call for the creation of distinct funds to which payments are made and benefits are paid. Such funds may be operated by third parties who manage fund assets independently. In certain countries, these parties are known as trustees. The word trustee is used in this Standard to identify such people regardless of whether a trust has been constituted.

A statement of net assets available for benefits and a description of the financing policy must be included in the financial statements of a defined contribution plan.

The plan’s activities attract the members’ attention since they have a direct impact on the amount of their future rewards. Participants want to know if contributions have been received and if sufficient control has been performed to preserve the recipients’ rights. An employer is concerned with the plan’s efficiency and fairness.

A defined contribution plan’s reporting goal is to give information on the plan and the performance of its investments on a regular basis.

A defined benefit plan’s report should include one of the following:

If an actuarial valuation has not been conducted as of the date of the report of a defined benefit plan, the latest valuation shall be utilized as a foundation, and the date of the valuation should be stated. The actuarial present value (PV) of promised retirement benefits should be based on the benefits guaranteed under the provisions of the plan based on service given to date, using either current or anticipated wage levels, with disclosure of the basis employed. Any changes in actuarial assumptions that have had a substantial impact on the actuarial present value of promised retirement benefits should also be stated.

Financial statements must explain the link between the actuarial present value of promised retirement benefits and net assets available for payments, as well as the strategy for supporting promised benefits.

The payment of promised retirement benefits under a defined benefit plan is dependent on the plan’s financial situation and contributors’ capacity to make future contributions to the plan, as well as the plan’s investment success and operating efficiency. A defined benefit plan requires the counsel of an actuary on a regular basis to examine the plan’s financial state, review the assumptions, and suggest future contribution amounts.

The goal of reporting by a defined benefit plan is to give information on the plan’s financial resources and activities on a regular basis, which is valuable in examining the linkages between resource accumulation and plan benefits over time.

The present value of expected payments from a retirement benefit plan can be computed and presented using current salary levels or predicted salary levels up to the time of retirement of members.

Actuarial valuations are not generated more regularly than every three years in many nations. If an actuarial value has not been made at the time the financial statements are published, the most readily available valuation is used as a foundation, and the date of the valuation is stated.

Valuation of plan assets under IAS 26

Investments in retirement benefit plans must be carried at fair value. When it comes to marketable securities, fair value equals market value. When holding plan investments for which an estimate of fair value is not available, the reason for not using fair value must be disclosed.

In the instance of marketable securities, fair value is often market value since it is regarded as the most meaningful measure of the securities at the report date as well as the investment performance for the period. Securities with a predetermined redemption value that have been bought to match the plan’s obligations or particular elements of the plan thereof may be carried at amounts based on their final redemption value assuming that there is a constant rate of return to maturity.

When holding plan investments for which an estimate of fair value is not attainable, such as complete ownership of a company, the reason for not using fair value is disclosed. When investments are held at a price different than market value or fair value, the fair value is often declared as well. The assets utilized in the fund’s activities are accounted for in compliance with the relevant Standards.

Read our Article:A summary of IAS 24 on Related Party Disclosures

What is Ingenuity in Financial Serv...

Financial services can be defined as the economic services provided by the finance industry. Th...

Need of convergence of IAS with IFR...

Introduction Every nation follows its own set of policies and standards for accounting. However...

What is Order to Cash Cycle?

Order to Cash (OTC/O2C) is a set of various business processes used for receiving/processing cl...