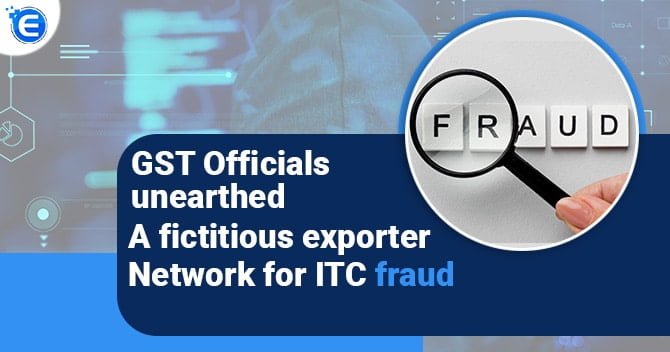 Despite the fact that the interface for taxpayers is digital and electronic, tax evaders attempt fraud even on electronic platforms by misrepresenting facts such as providing fake credentials at the time of registration or by indulging in producing bogus invoices to obtain excessive ITC.

Various validations have been put into the GSTIN/ CBIC system to seek out tax evaders in order to avoid tax evasion. Nonetheless, 818 such fraud cases totalling rupees 4,002 crores were registered during the April-June quarter of the fiscal year 2021-22. The necessary actions had been taken in accordance with the GST law[1] to retrieve the sum from tax evaders who committed ITC fraud. One such similar ITC fraud has been recently detected by the GST Department.

The GST authorities in Delhi unearthed a network of bogus exporters and arrested one individual for illegally claiming rupees 134 crores in input tax credit. According to the Finance Ministry, M/s Vibe Tradex, which exports Pan Masala, chewing tobacco, FMCG goods, and other items, was held for investigation based on the research and risk analysis done by GST officers.

The officials of the Central Goods and Services Tax (CGST) Commissionerate, Delhi East, conducted a thorough examination on this behalf. They then discovered a network of fictitious exporters who were availing and utilizing fake Input Tax Credit (ITC) of rupees 134 crores under the Goods and Services Tax (GST), according to the Ministry. This was done with the intention of fraudulently claiming an IGST refund.

It was identified that Chirag Goel, an MBA from the University of Sunderland, UK, was in charge of the fictitious exporter network. An extensive examination was carried out for the e-way bills generated by two supplier firms or companies controlled by his associate. The scrutiny revealed that the vehicles for which the e-way bills were generated for the alleged supply of goods were being used in distant cities such as Gujarat, Maharashtra, and Madhya Pradesh but had never reached Delhi during the said period.

According to the Ministry’s statement, Chirag Goel was the leader of the scheme to defraud the GST Department. The total amount of fake ITC availed and utilized by him is rupees 134 crore. He has been placed in judicial custody for 14 days, until October 26 by the Metropolitan Magistrate, Patiala House Court, New Delhi. The matter is currently being investigated further. He is being held for committing offences as specified under Section 132(1)(c) of the CGST Act, 2017. The offences under this section are cognizable and non-bailable.

As per GST law, if the Commissioner of CGST/SGST thinks a person has committed a violation under Section 132, any authorized CGST/SGST officer may arrest him. The detained individual shall be notified of the reason for his detention. In the event of a cognizable offence, he will appear before the Magistrate within 24 hours.

Some of the offences specified under Section 132 where arrest provisions become applicable are as follows:

When section 132 is read in conjunction with the arrest requirements, it appears that a person can be arrested only if the tax evasion exceeds 100 lakh rupees or if the individual has previously been convicted of an offence under section 132.

The GST officials in Delhi discovered a network of fictitious exporters and arrested one person for fraudulently claiming Rs 134 crore in input tax credit. The offence was recorded under Section 132 of the CGST Act, 2017, and is cognizable and non-bailable.

Here, we will discuss all GST registration requirements in one single post. This arti...

In reverse charge mechanism, the recipient of the goods or services is liable to pay GST in pla...

How to do GST Registration in Rajas...

Taxes are the primary source of income for any country, and India is no different. The taxes ar...