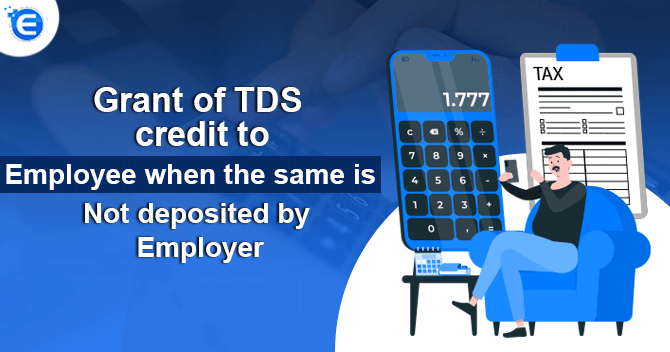 In Kartik Vijaysinh Sonavane vs. Deputy Commissioner of Income Tax [R/Special Civil Application No. 6193 of 2021 dated November 15, 2021], the Honourable Gujarat High Court has instructed the income tax department to allow TDS credit (tax deducted at source) to the taxpayer, even though the same is not deposited by the employer to the government.

Grant of TDS Credit: What is the issue?

Kartik used to be a pilot with Kingfisher Airlines. The airline, which ultimately went bankrupt, deducted tax from his salary but did not deposit it with the Central Government. Kartik, however, received a notice from the IT department necessitating him to give the tax.

Kingfisher Airlines (i.e., the Employer) had deducted from the salary income of the assessee a TDS amount of Rs. 7,20,100 for the assessment year 2009-10 and Rs. 8,70,757 for the assessment year 2011-12 respectively. But the amount of TDS had not been deposited by the employer to the Central Government. As a reason, the TDS credit which was claimed by the assessee was disallowed by the Assessing Officer/Respondent. The Respondent in fact raised a demand through several demand orders along with interest and had also started recovery proceedings. Being dissatisfied with the demand orders, the assessee filed a writ petition against such recovery proceedings.

The courts have addressed this issue in several instances and decided in favour of the taxpayer.

What is TDS credit?

If the tax deducted by the payer is not displayed in this tax passbook, it means that the payer has either not paid the taxes to the central government or, after payment, the deductor has not submitted the TDS statement or TDS report with the income tax department. In both these cases, the income tax department disallows TDS credit and issues a notice of tax demand to the taxpayer.

The tax demand occurs as a result of a discrepancy between the credit claimed in the ITR and the TDS credit reflected/available in Form 26AS. The automated system at the CPC (the income tax department’s Central Processing Centre) evaluates the two records, and if the TDS credit available in Form 26AS is less than that claimed in the ITR, a tax demand notice is sent to the taxpayer filing the return.

Provisions under the Act

Section 205 of the Income-tax Act of 1961 precludes the recovery of tax from a taxpayer if tax has already been deducted from his income by the deductor. A taxpayer cannot be forced to pay tax if that tax is deductible from his income and has already been deducted. Furthermore, under Section 191 of the Act, a person is responsible to pay the tax directly (on his/her own) on salary income only if tax has not been deducted from the salary payment in the form of TDS.

As a result, a taxpayer is only obligated to pay the tax if a specific income is not covered by the TDS provisions or if it is covered but the tax has not been deducted on that income. He or she cannot be held accountable if tax has been deducted but not paid to the government.

The ruling of the Court

The Gujarat High Court, in the abovementioned case, granted the assessee’s plea and determined that no separate justification was necessary. The income tax department is prohibited from rejecting the assessee the benefit of the tax deducted at source by his employer during the concerned fiscal years.

It was further held that if tax has been deducted by an employer but not paid to the Central Government, the Department shall use Section 201 of the Income-tax Act of 1961 (IT Act) to collect TDS from the employer.

It was observed by the Court that Section 205 of the Income Tax Act clearly states that if tax is deductible at source for a given year, the assessee will not be asked to pay the tax on his own to the degree to which such tax has been deducted from his income.

Moreover, in a similar case, the Karnataka High Court had declared that if the tenant of the property has deducted tax from the rent but has not rendered it to the government, the tax department’s sole option is to collect the TDS amount from the tenant who has deducted the tax, rather than the landlord.

Grant of TDS Credit: Rights of the taxpayer

The Central Board of Direct Taxes (CBDT)[1] has provided directions on this matter due to the gravity of the situation and the ongoing litigation. The CBDT has said explicitly that in circumstances where TDS is deducted by the employer or deductor but not submitted with the government, then the Assessing Officer cannot levy tax on the payees or issue a demand order on them, i.e., the recipients of the salary/other income.

The CPC processes ITRs on an automated basis. A TDS credit is only allowed in the system to the degree that it shows on Form 26AS. As a result, if there is a mismatch in the TDS amount, CPC would undoubtedly issue a tax demand. Because the ITR forms do not contain an annexure (annexure-less), a taxpayer cannot attach any supporting papers to the ITR in support of a TDS claim. As a result, it is somewhat guaranteed that the taxpayer will get a notice if a disparity is discovered between the TDS reflected on Form 26AS and the TDS credit claimed in the ITR.

It is recommended to verify Form 26AS before submitting ITR, and if any discrepancies are discovered, they should be remedied before filing ITR. As a result, it is best to examine Form 26AS ahead of time in order to remedy any inconsistencies as soon as possible. If a taxpayer discovers that Form 26AS does not indicate the entire amount of TDS deducted from his or her income, he or she should notify the deductor. Only the deductor may rectify any errors. As a result, the taxpayer should request that his deductor correct the error as soon as possible and ensure that it is addressed before submitting the ITR.

A taxpayer has no legal right to compel the deductor to deposit TDS or to amend any errors in the TDS statement submitted by the deductor. If the deductor refuses to honour the taxpayer’s request, he may submit TDS documentation to the income tax department.

In reply to the demand notice, the taxpayer may file a response on the e-filing portal together with supporting documentation demonstrating TDS deducted from his income. The taxpayer might present salary slips and bank statements indicating the credit of net salary/other income after the deduction of TDS.

If the documentation supplied is judged to be valid, the AO is obligated to grant TDS credit to the taxpayer. However, if he continues to refuse the credit, the sole alternative is to submit an appeal with the Commissioner of Income Tax (Appeals).

In the given case, the Gujarat High Court has determined that a TDS credit shall be granted to the assessee (Kartik) notwithstanding the fact that the same has not been paid by the employer.

In addition, in cases where the tax has been deducted but not deposited to the Central Government, the issues must eventuality be taken care of by Section 201 of the Act. Hence, it is not at all acceptable to proceed against the assessee even after the deduction of the TDS amount from his or her income.

Read our article:Understanding the Difference between TDS and TCS

Penalty for Breach of Section 269SS...

Finance plays a significant role in every business. In many circumstances, the own finances of...

Introduction The tax regime of every country is an integral component of its economy since it i...

Is PAN Number Required For Propriet...

PAN stands for Permanent Account Number. It is an essential document as per the Income Tax Act,...