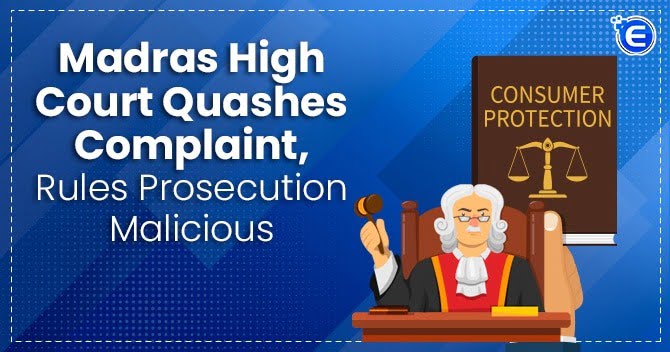 Terming the prosecution malicious, the Madras High Court quashed the complaints filed by the Income Tax Department under Section 276 C (2) of the Income Tax Act 1961 against the assessee. Section 276 C (2) entails punishment for the offence of willfully attempting in any manner whatsoever to evade tax, penalty or interest chargeable or imposable under this Act. The Hon’ble Court stated that the Income Tax Department[1] had malafidely suppressed material facts about payment of tax by the assessee while issuing sanction for prosecution of offence under the said section. Court notified that in order to hold the assessee in default there needs to be a default of tax payment in true sense. Facts of the case has been discussed below.

The assessee in this case M/s. AMK Solutions Pvt Limited had filed a self-assessment return. However, the income tax department filed a complaint against the assessee for prosecution of offence under Section 276 C (2) of Income Tax Act 1961, alleging that the assessee willfully attempted to evade tax payment for the relevant AY. In response to this the assessee i.e., M/s. AMK Solutions Pvt Limited filed a petition before the Madras High Court under Section 482 CrPc to quash the complaint.

The petitioner submitted before the court that in order to attract offence under the said section, two ingredients of a culpable mental state to evade tax as well as attempt to evade tax is necessary. They further informed the court that they did not have any intention to evade tax payment and that they had duly disclosed their income and tax payable while filing the income tax return.

Petitioners also said that they were not able to pay the tax along with the ITR because of financial constraints however they had remitted the tax later before initiation of any proceedings. Hence the petitioners affirmed that there was no tax evasion or attempt for tax evasion.

The petitioner informed that the Principal Commissioner of Income Tax had issued sanction to prosecute the assessee without considering that the tax payable by the assessee was remitted even before the issuance of show cause notice.

The income tax department explained that in case of self-assessment, Section 140 A mandates assessee to submit the ITR with proof of tax payment and in case of failure to pay the tax along with the ITR, will be deemed to be a default.

Courts’ Observation and the final ruling

The High Court relied upon the Supreme Court judgement in the case of Prem Dass vs Income Tax Officer while considering the expression “willful attempt to evade tax”. SC had held that there should be concealment of income by the assessee or the assessee should have furnished incorrect income particulars.

The Court observed that there was no concealment of income or furnishing of any incorrect income particulars from the assessee. The court also stated that the tax that was not timely paid by the assessee was paid later along with the interest due.

The Court also stated that the assessee filed the income tax return on time and disclosed the income to be paid, and remitted the tax payable along with the interest. Hence there was no intention on the part of assessee to evade tax wilfully and therefore the Section 276C was not attracted. The court ruled that in order to invoke the provision of Section 140A (3), there needs to be a default of tax payment in true sense. The Court said that by applying the said provision, there was non-application of mind by the income tax department over the material records.

So the Court said that the income tax department had initiated malicious prosecution by suppressing material facts and based on the intentional false allegations, it had abused its powers. Therefore the court allowed the petition and quashed the complaint filed by the revenue department against the assessee.

What are the Income Computation and...

Recently, the Government of India has come up with the major change in the Indian taxation syst...