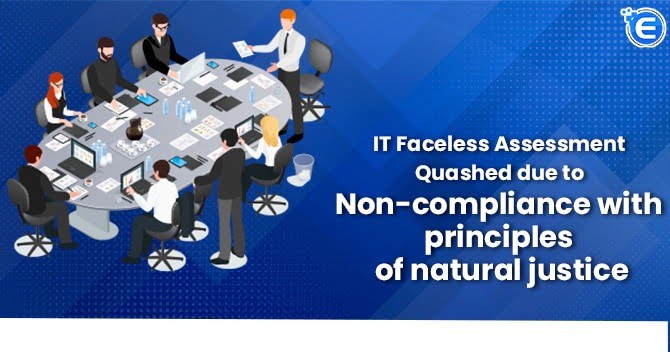 A divisional bench of Bombay High Court consisting of Justice Pushpa v. Ganediwala and Justice A.S. Chandurkar in a recent case of Pankaj s/o Roshan Dhawan v National e-Assement Centre has quashed the income tax faceless assessmentbecause the Income Tax Department failed to consider the reply filed by the petitioner. The honourable bench decided to quash the order because the income tax department failed to observe the principles of natural justice at the time of issuing notice.

In order to speed up the process of disposal of cases related to taxation, a new facility of IT faceless assessment was initiated for hearing the income tax appeals. Under the said system, the cases are supposed to be disposed off in a faceless manner in a faceless environment except for the appeals that are related to the matters of tax evasion, black money, serious fraud, special research and international tax.

In the instant case, the petitioner had approached the honourable Bombay High Court under Article 226 of the Constitution of India challenging the faceless assessment order issued by the Income Tax Department.

The said order has been passed under section 143(3) read with section 144B of the Income Tax Act, 1961 by which the income of the assessee stands assessed. As a consequence to this, a demand notice was issued on the same day in terms of the said order.

The grounds taken by the petitioner for filing of the said petition is the non-compliance of the principles of natural justice and not granting sufficient opportunity to the petitioner to properly respond to the show cause notice.

The petitioner pointed out the fact that he was given a time of mere 3 days to respond to the show cause notice from the date of receipt of notice. The petitioner was also informed that he could also request for a grant of personal hearing, which if granted, would be done through the mode of video conferencing.

Submissions from the Petitioner

Responding to the show cause notice, the petitioner made a request for adjournment on medical grounds. The petitioner on the same day had indicated that the matter involves complicated facts and thus requires explanation. In furtherance to the said reasons, the petitioner requested for personal hearing through the mode of video conferencing.

Submissions from the Respondent

The counsels for the respondents argued further that since an alternate remedy of statutory appeal was available with the petitioner under section 264 of the Income Tax Act for challenging the said assessment order, he should have opted for that instead of directly approaching the honourable High Court directly without exhausting that alternative remedy.

Order of the Court: Quashing the IT Faceless Assessment

The honourable Bombay High Court reaffirmed the fact that an alternative remedy had already existed with the petitioner. However, the assessment order passed by the Income Tax Department has been issued without following the principles of natural justice i.e. not giving due and proper opportunity to the petitioner. This is the reason why the court was not inclined towards relegating the petitioner to avail the existing statutory remedy under section 264 of the Income Tax Act.

The petitioner had also challenged some of the provisions of the Income Tax Act, 1961[1] being violative of Art. 14 of the Indian Constitution i.e. right to equality. The court held that since the IT faceless assessment order has been dismissed by the court, there is no point in going into the merits of the said case which means that the interpretation of the said sections is open for interpretation at an appropriate stage.

From the given circumstances of the case, the order of the honourable Bombay High Court is apt because granting a time of 3 days to respond to an IT faceless assessment order amounts to denying the petitioner due and proper time to respond and reply such show cause notices. Hence, the High Court was correct in quashing of the said IT faceless assessment order in favour of the plaintiff despite the option of statutory remedy available under section 264 of the Income Tax Act.

Income Tax is calculated on the taxpayer's total income earned or received during the financial...

As part of the current digitisation program, income tax returns can be e-verified online withou...

Alimony of Divorce and its Tax impl...

Marriage is considered the coalescence of two souls. This intimate union of two people comes to...