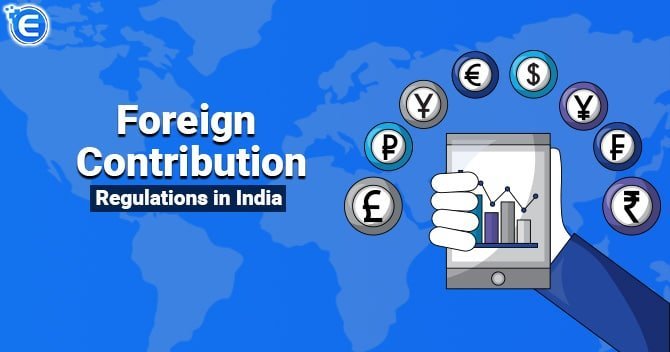 In order to regulate foreign funding obtained by charitable institutes, political parties and media and to prevent foreign organizations, individuals from influencing social, political and religious matters in India, the Foreign Contribution Regulation Act was enacted. After its enactment in 1976, the Act was amended in 2010. The Act applies to all associations, groups and NGOs which seeks foreign donations. This article examines the various facets of foreign contribution regulations in India.

What is Foreign Contribution?

This means a donation, delivery or transfer of a currency, any security or share of the company made by a foreign company, government or its agencies, MNCs, trust or society registered outside India or foreign citizens to an Indian citizen. An article provided as a gift for personal use to someone up to the amount of 1 lakh rupees cannot be considered as foreign contribution.

Any interest earned or accrued from this contribution in India will be considered as foreign contribution. However, an amount obtained by fee including the fee of educational institute or in business transaction undertaken in the ordinary course of trade will not fall within the ambit of foreign contribution.

Who can receive Foreign Contribution and who cannot as per foreign contribution regulations in India?

How to get Foreign Contribution?

Criteria under Prior Permission

In order to apply-

The registration will be valid for 5 years period and it can be renewed before 6 months of expiry of such period in Form FC-3C.

When is a registration suspended or cancelled?

The MHA may inspect the accounts of an association and if it receives any adverse input against the functioning of the association, the MHA can suspend the FCRA registration initially for 180 days. The association will not be able to receive any fresh donation and also can’t use more than 25% of the amount available in the bank account without the prior permission of MHA.

The MHA may cancel the registration of an organization which wouldn’t be eligible for registration or grant of prior permission for 3 years from the cancellation date.

What was the need for Foreign Contribution Regulations in India?

Further, to ensure that such contributions don’t affect the internal security of the country negatively and the regulations were brought in to enhance transparency and accountability in the receipt and use of foreign contributions.

The Government of India brought out the Foreign Contribution (Regulation) Act 1976 with a view...

Getting permission for Foreign contribution in an NFO is strictly regulated and in recent years...

It is a compulsory registration for the Section 8 Companies, Trust or Non-governmental organiza...