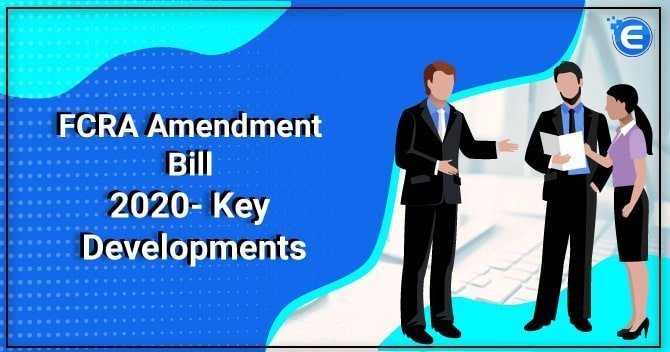 The Government of India brought out the Foreign Contribution (Regulation) Act 1976 with a view of opening the doors to foreign funding of public sector institutions, political parties, educational institutions and other Non-Governmental Organizations. There were a lot of critics on this bill, and the parliament paved the way to get an amendment for this bill. This article is going to analyze the recent developments of the FCRA Amendment.

The following are the key features of the Foreign Contribution (Regulation) Act 1976:

Why was the Foreign Contribution (Regulation) Act 1976 Amended?

This was amended to improve the security as well as the national interests of the country. With a view of increasing the amount of information technology and the use of IT infrastructure, these amendments were allowed to be granted. Moreover, with the increase in the amount of technology used by the country, there was a significant growth of foreign contribution to the development of different sectors. However, with the 1986 amendment, there were specific discrepancies in the law which had to be addressed.

What Led to the FCRA Amendment Bill 2020?

The government, to highlight specific issues in the FCRA amendment, brought out the bill in September 2020. Before this bill, the Foreign Contribution Regulation Bill, 2006 was passed. With a view of increasing the amount of transparency in the sector, this bill was introduced.

The following are the key features of the 2006 bill:

There were many discrepancies and issues faced after the FCRA Act was passed. Hence the government decided to bring out an FCRA amendment which addressed all the issues.

Some of the controversies which were brought into the light are:

Non Registration of Educational Institutions- Some prominent educational institutions such as JNU, Delhi and IIT have not registered correctly with authority. Apart from this, these institutes do not have a proper account to maintain any form of FCRA currency account. This issue was addressed by the Parliament of India and have brought some reform through the FCRA amendment.

Greenpeace India Foundation- One of the prominent International NGO’s Greenpeace had breached the provisions of the FCRA.  Due to this, the Indian government blocked licenses for further foreign contribution to Greenpeace. Greenpeace has been charged with blocking future environmental activities in India. Furthermore, different activists from Greenpeace brought out protests against carrying out development activities which involve nuclear power, thermal power, coal and aluminium mining. Licenses were blocked in response to these activities which affected the provisions of the FCRA act. Apart from this, the main objective of this act could not be fulfilled. This act was brought out with the main intention to develop a national interest in specific areas. NGO’s and other activists were against the development of national interests of the country.

Closure of Compassion International- Another prominent American Non-Governmental Organisation had to shut down operations in India as the government rejected further foreign contribution to the development of this NGO.

Some of the reasons cited by the government are the NGO, promoted activities such as:

These reasons in the eyes of the Government were valid to be considered for rejecting foreign contribution in India. Many countries, especially in the EU (European Union), considered this movement of the Indian Government as derogatory for the development of further activities. All these reasons led the Government to bring out the FCRA amendment in 2020.

In September 2020, the Ministry of Home and Affairs[1] (MHA) brought out a major amendment to the FCRA act. This FCRA amendment bill was an eye changer to foreign contribution received in the country. Advocates hailed the development brought about by the bill. However, many NGO’s in the country raised issues related to the bill.

The following are the essential features of this bill:

What did the developments of the FCRA amendment cause?

While many legislators hailed the FCRA amendment bill, many were against the bill. Many international NGO’s claimed that the bill was passed as a retaliatory measure against them. Due to the events which unfolded after Greenpeace, many NGO’s were targeted by the Government for receiving funds for carrying out activities which did not support the development of National interests of the country.

The supporters of the FCRA amendment claimed that passage of this bill would prevent activities such as donating to Indian NGO’s which encouraged religious conversion. Advocates of this bill said that this major reform would increase the number of development activities in the country.

Other supporters said that this bill overall improved the transparency for foreign funds which were received by the country.

There were many criticisms caused by this bill. These were mainly brought by different associations which supported NGOs. Some claim that this bill targeted activities of NGO’s which were funded internationally.

How to get FCRA Registration in Ind...

Recently the Ministry of Home Affairs has been in news for cancelling the FCRA Registration of...