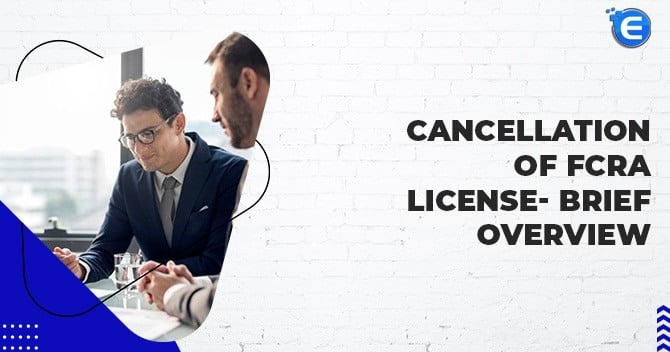 Recently the Ministry of Home Affairs has been in news for cancelling the FCRA Registration of various Non-governmental organizations. FCRA stands for Foreign Contribution (Regulation) Act. Foreign funding of persons is regulated under FCRA and is implemented by the Ministry of Home Affairs. In this article we will discuss when a FCRA License is cancelled and what are the ramifications of its cancellation.

The FCRA regulates receipt of funds from sources outside of India to NGOs in India. It bars the receipt of foreign contributions “for any activities which is detrimental to the national interest”. The Act also provides that the government can refuse permission if it is of the opinion that the donation to an NGO will adversely affect “public interest” or “economic interest of the country”.

A person under FCRA 2010 can obtain foreign contribution subject to having a cultural, economic, educational, religious or social purpose. The person can be an individual, a HUF, an association, a company registered under Section 25 of Companies Act 1956 (now section 8 of the Companies Act 2013).

As per FCRA the following are prohibited from obtaining foreign contribution:

The FCRA registration is mandatory in order to receive foreign fund and this registration shall be valid for 5 years. It can be renewed again for extension of the validity. Individuals can also obtain foreign funds without the explicit permission from the MHA however the monetary limit for such acceptance of foreign contributions must be less than 25k rupees.

Under this Act, Aadhaar number for identification is necessary for all office bearers, directors, or key functionaries of the person obtaining foreign contribution. The Act provides that the foreign contribution must be obtained only in the account designated by the bank as a FCRA account in the branches of SBI. The Act provides that the central government can permit a person to surrender their registration certificate or FCRA license.

When a FCRA License can be cancelled?

The Ministry of Home Affairs (MHA) can cancel the FCRA License of an entity if it observes that essential compliances have not been followed. Some of the reasons that can lead to cancellation of the FCRA License are as follows:

Every registered entity under FCRA must file Annual Return in FC-4 within the prescribed time period. Non-filing of this Annual return violates Section 18 of the Act read with Rule 17 of the FCR Rules 2011. Therefore, if there is any such violation then the cancellation order can be issued.

As mandated under Section 17 of FCRA 2010, opening of bank account in one or more banks that has integrated their system with PFMS is necessary. If the central government is of the view that the registered association has failed to maintain a proper FCRA account then its FCRA registration can be cancelled.

Utilization of foreign contribution for administrative purpose beyond the prescribed limit can also lead to cancellation of the license. Administrative expenses are essential in running a non-profit organization. These expenses include costs of hiring personnel to manage the person’s activities, salaries, wages, or any other form of remuneration paid to the members of the governing body/executive council, rent, travelling expenses, electricity and telephone bills, legal and professional fees, etc. The Foreign Contribution Regulation Amendment Act[1] seeks to bring a change in Section 8 of the Foreign Contribution Regulation Act (2010) by reducing the administrative expense barrier from 50% to 20%.

What happens on cancellation of FCRA License?

It is essential for entities receiving foreign funds to register under FCRA and obtain FCRA license. Furthermore renewal of this license before expiry is also imperative in order to extend the validity of this license.

Getting permission for Foreign contribution in an NFO is strictly regulated and in recent years...

How to get FCRA Registration in Ind...