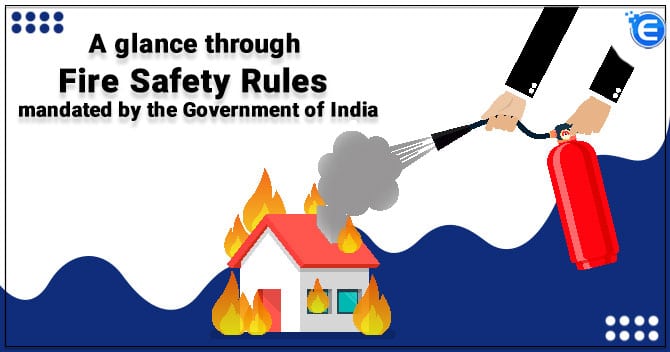 You would have heard about instances of fire outbreak in India that happens every now and then. This has raised some serious questions on the safety and security of people. Fire outbreak can cause severe damage and also result in loss of life. According to the India Risk Survey report, fire outbreak is the third biggest risk to business operations. It can also cause massive property loss. Therefore Government of India has mandated fire safety rules.

In the last few years, we have witnessed a significant growth in high rise buildings. Massive buildings are constructed but have they adopted norms of fire safety? The fire in residential area, especially in high rise buildings, is more destructive, wherein rescue operations are complex and eventually results in loss of lives as well.

Considering the gravity of the situation, awareness should be spread about fire safety. So what are the fire safety rules and regulations in India, and can it prevent potential fire hazards? Let’s find out.

The fire services come under the provisions of Article 243W 12th Schedule of the Indian Constitution. The functions in the 12th schedule focus on the performance of municipalities.

Let’s peek into the history of fire services until today:

Fire Safety Rules-Compliance by the Government of India

There were instances of several high rise builders and contractors disregard the fire safety rules. Apart from that, the occupiers also never performed their duty of regular maintenance of the fire prevention systems installed at their homes or work place.

The national building code in 2016 suggested a periodical fire safety inspection by the personnel residents of the buildings in order to assure fire safety standards. In case of commercial buildings, the statutory authorities such as state factory inspectorate bats for fire safety audit through external agencies depending upon the nature of the materials and activities done in the building.

Some of the recent measures taken for prevention of fire hazard are as follows:

What are the points of concerns that should be addressed with regard to fire safety rules?

There are certain points of concern that requires immediate attention:

In order to reduce instances of fire-related accidents, there should be strict adherence and compliance with fire safety rules and regulations in India. Preparedness for the worst-case scenario is the best possible solution.

Read our article: What is the Role of Pollution Control Board?

What is the License required for Ru...

Selling alcoholic beverages without a license is prohibited and punishable under law. Therefore...

Benefits of MSME Registration in In...

MSME is an abbreviation for Micro, Small and Medium Enterprises. This form of entity is used by...

In the year 2018, to give a boost to the Small and Medium Enterprise (MSMEs), the Indian govern...