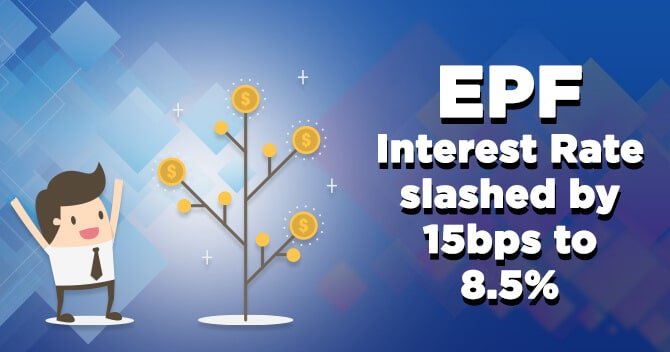 What is EPF or Employees’ Provident Fund?

The Employees’ Provident Fund Organisation (EPFO) assists the CBT in its activities. EPFO functions under the jurisdiction of the government and is managed by the Ministry of Labour and Employment.

Comparison of EPF Interest Rate on other Saving Schemes

Different saving schemes and their interest rates are mentioned below:

How will the EPF interest rate cut affect salaried employees?

Salaried employees who invest in employee provident funds will receive 0.15 per cent lesser returns on the amount they deposit in this fiscal year as compared to last year. Last year’s interest rates were 8.65 per cent.

EPFO manages a collection of over Rs.12 trillion and every year; it has a fresh corpus of around Rs.1.46 trillion. From its annual deposits, the fund manager invests approximately 15% in equity and the rest in debt instruments, including the government and corporate bonds.

Other Ratification is done by Employee Provident Fund Organisation

The Employee Provident Fund Organisation or EPFO also ratified and appreciated the restoration of normal pension after fifteen years from the date of commutation. This will benefit about 6,30,000 pensioners who in the past had opted for partial withdrawal on or before 25th September 2009.

According to Bharatiya Mazdoor Sangh which is an affiliate of the Rashtriya Swayamsevak Sangh said that they had protested against the reduction in EPF interest rate. Still, due to the non-availability of new income generation, the finance committee suggested for only 8.5%.

As per K. Padmanabhan, vice president of the Centre for Indian Trade Unions (CITU) and also a member of the CBT said that the no agenda was shared by the EPFO officials related to the  EPF interest rate. He also said the CBT officials had a pre-decided rate.

K.E. Raghunathan an another CBT member representing its employers said that 8.5% rate is far better than most other investments, and the minister decided to pay 8.5% as against 8.45% suggested by the investment committee of the fund manager.

The Employee Provident Fund scheme aims at promoting savings which can be used post-retirement by various employees all over the country. The amount of interest received on the deposit along with the total accumulated amount is totally tax-free. The interest earned on the Employees’ Provident Fund account is calculated depending on the rate decided by the Central Board of Trustees along with the Finance Minister. The interest rate of 8.5% on EPF will be applicable from the Financial Year 2019-20.

Trade license is a must for every business entity that seeks to generate profit through its ope...

Important Details About the PSARA L...

Micro Small and Medium Enterprises (MSME) are the backbones of the Indian economy. Over the pas...