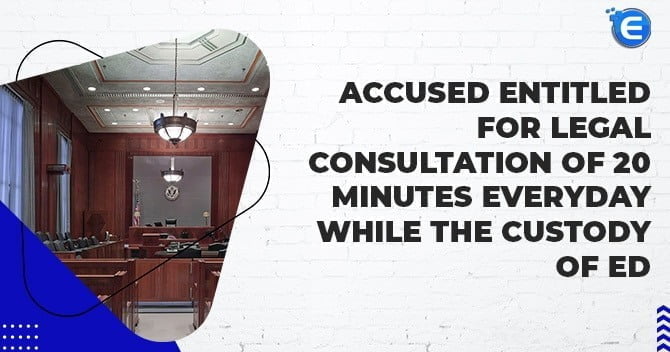 Accused under the PMLA are entitled to 20 minutes of legal consultation each day while in the custody of the ED, as stated by the Delhi Court. The Rouse Avenue Court decided that an accused under the Prevention of Money Laundering Act (PMLA) is allowed to 20 minutes of legal counsel on daily basis while in the custody of the Enforcement Directorate (ED).

The Directorate of Enforcement has requested that accused Sandeep Singh Madhok and Satinder Singh Madhok be remanded in ED custody for an additional 9 days. IO has sought that the accused people Sandeep Singh Madhok and Satinder Singh Madhok be remanded to ED custody for a term of 9 days through petitions, claiming that during questioning, the accused persons were faced with documentation as well as other facts of the case. Extraction of data from digital devices was also not performed, and two mobile phones confiscated from the accused people’ residential premises have yet to be scrutinized and data extracted. Data was retrieved from electronic devices throughout the examination, and documentation discovered during the search is being examined.

The electronic data collected during the searches is extensive, and it is being shared with the accused. Furthermore, the process of analysing digital data and then confronting it with the accused persons, as well as investigating monetary transactions and many other questionable discussions with other people, takes time. It is also claimed that 14 of the questionable businesses named in the Forensic Audit[1] report belong to Naresh Jain, a Hawala Operator. The bank account statements of these shell businesses were collected and analysed, and it was discovered that more than Rs. 1,713 crores were sent to M/s Jay Polychem India Ltd. from these businesses in numerous transactions between 2010 and 2013. As a result, the investigation into several critical parts of the case is still underway. The accused had been continually concealing information throughout the investigation, and fresh facts are suspected to surface only after the confrontation with the electronic information, which is why their extended imprisonment is necessary for a period of 9 days.

The accuser’s refusal to cooperate has only slowed the investigation, requiring the need for custodial interrogation on certain critical aspects of the case, like determining the role of numerous other persons and aides, quantifying the proceeds of crime relating to bank transactions and linked accounts, and confronting the accused with the voluminous evidence on record. It has also been mentioned that the confrontation remained incomplete because of the accused persons’ non-cooperative and evasive attitude, and because the data was voluminous (around 9 mobile phones, 2 hard discs, Pen Drives, etc.), accused Sandeep Singh’s complaint of Sleep Apnia requiring medical tests in accordance with the court’s direction consumed nearly half of the custody period in medication/test. Taking into consideration the accusations stated in the application, the level of involvement claimed, and the necessity for further confrontations with evidence, data in electronic materials, and so on, Special Judge Hon’ble Mr. Harish Kumar remanded the accused people to the custody of the ED for a term of 05 days. Accused must be medically evaluated each day in the morning and evening for the duration of the 4 – 3 days period. Accused people have the right to legal consultation for 20 minutes every day while in the custody of the ED, and consultations will be held at the ED Office in Khan Market at 4:30 p.m. The consultation must take place in the presence of an Investigation officer (IO) or an authorised person who must stand at a distance that is not audible.

Read our article:Can Third Party Rights Be Protected During Attachment of Property Under PMLA 2002?

The Supreme Court recently allowed an appeal filed by OPTO circuit India Ltd. that challenges a...

In a major development, the Reserve Bank of India (RBI) announced the introduction of the Onlin...

RBI Initiates Video Based KYC as an...

RBI on Thursday issued news circular stating the introduction of Video based KYC which shall se...