Can Third Party Rights Be Protected During Attachment of Property Under PMLA 2002? 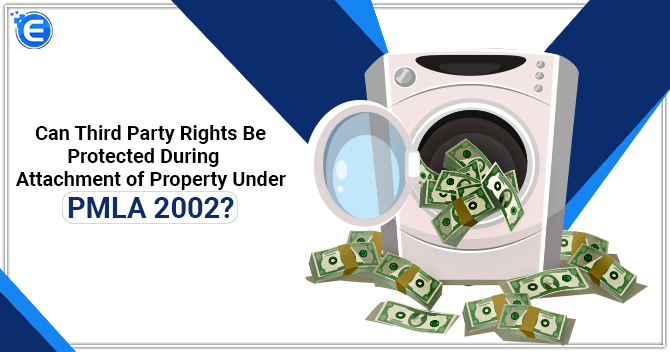 The Prevention of Money Laundering Act (PMLA 2002) was introduced to prevent the crime of legalizing the income or profits made from an illegal source. Under this Act, the government or the public authority can confiscate property gained from unlawful means. This article examines the scope of provisional attachment of property under this Act to understand if the said act protects the right of third parties.

Introduction: Attachment of Property under PMLA 2002

Section 5 of Prevention of Money Laundering Act means that proceeds obtained either directly or indirectly from offences provided under the Act are not dealt in any manner so as to frustrate the proceedings pertaining to the confiscation of proceeds under the Act. This point seems to be in contrast with the rights of third parties having bona fide interests like banks, mortgagees, transferee etc. who may be having a lawful interest in the property that has been accused to be involved in money laundering and where such party didn’t had any information regarding such property at the instance of acquisition of interest.

As per Section 3 of the Prevention of Money Laundering Act, the money laundering offence has been defined as:

If you wish to go through the scheduled offences, then you may refer to Part A to C of Schedule to the Act, and it includes offences under statutes like IPC 1860, Prevention of Corruption Act 1988[1], SEBI Act, Companies Act 2013 etc.

What do you mean by proceeds of crime?

Proceeds of crime, as provided under the Act, includes any property that has been derived or obtained either directly or indirectly by a person as a result of a criminal activity that comes under the scheduled offence or the value of such property or the property equal in value held in the country of the property is taken or held outside of the country.

It may be a possibility here that even the properties that don’t fall under criminality which are of the same value as the alleged property, can be said to be proceeds of crime.

Provisional Attachment of the Property under PMLA 2002

The act gives vast powers to the investigating agency to attach properties that are involved in the money laundering offence. The ED can provisionally attach any property of any person who possesses the proceeds of crime.

The ED may provisionally attach a property if, on the basis of material in its possession, it has a reason to believe that such proceeds of crime may be dealt in a manner thus frustrating any proceedings under the Act. Such an attachment can be put in place for an initial period of up to 180 days from the date of the attachment and can still be attached during the pendency of proceedings under the Act.

Section 5 of the PMLA 2002 tells us that the order of provisional attachment can be invoked against a person who is not alleged of a scheduled offence in relation to a property involved in money laundering.

We can also know from various judicial cases and judgements that ED is empowered to provisionally attach property of a third party who may have a lawful interest in such property and didn’t know the fact that such property is connected with money laundering at the time of acquisition.

Who is a bonafide third party? (Case- Deputy Director, Directorate of Enforcement Delhi and Others vs. Axis Bank and Ors)

A bonafide third party is someone who can prove that he had acquired interest in the attached property through lawful means and for adequate consideration and that he wasn’t privy to/complicit in, the money laundering offence and where such person has complied with all laws.

Protection from Attachment of Property for Third party

Where the third party is able to prove by compelling evidence that he acquired interest in such property at the same time or after the scheduled offence was committed, then he may apply for release of such property by showing that he took due diligence to know that such property was not gained through illegal means and that the transaction was a legitimate one.

This claim of the third party will then be inquired into and adjudicated upon before the special court.

Note- The above mentioned observations were made by the Delhi High Court in the case of Deputy Director, Directorate of Enforcement Delhi and Others vs. Axis Bank and Ors, and the judgement, in this case, has been challenged in the SC.

The basic object of the PMLA 2002 is to ensure confiscation of property that is involved in money laundering. However, if a third party having a lawful interest in such property which he acquired by adequate consideration and who has no idea about the fact that such property is a tainted one, is subject to an order of provisional attachment, amounts to be an arbitrary order. In such cases, if the third party furnishes cogent evidence of acquisition of interest in such property, then the ED must refrain from passing the order of provisional attachment.

Assessing the Financial Impact on I...

This year countries all across the globe have witnessed unprecedented turmoil due to the impact...

Manage Your Inventory Wisely to Red...

For every business, working capital is required for operating the business of the Company. Rota...