Banks to seek prior approval for Foreign Currency Deposit Schemes 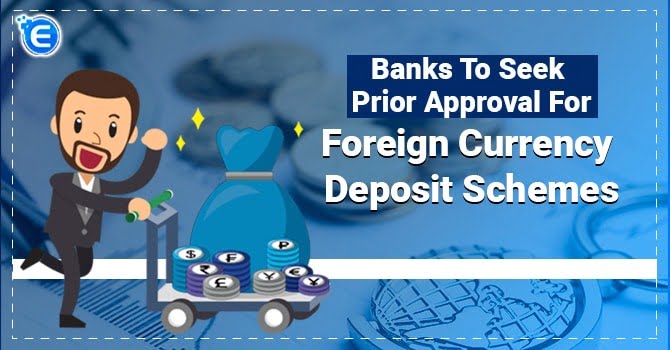 Recently, The Reserve Bank of India (RBI) has come out with a mandate which forces the banks to seek its prior approval before extending any kind of foreign currency deposit scheme to any of its customers. RBI has expressed its concerns about some banks making advertisements on behalf of mutual funds to their customers without making proper disclosures.

What is a ‘Foreign Currency Deposit Scheme’?

A Foreign Currency Deposit Scheme is one such scheme offered by the banks to the account holders where they can deposits their foreign currency for future use or for the purpose of hedging with the protection against the currency fluctuations in the International market. Usually such deposits are made for a longer duration and for a fixed lock-in period. The account holder cannot withdraw the amount before the maturity period. Longer the duration greater the profits account holder accrues.

Some foreign banks are operating in India who have been publishing advertisements asking the customers for foreign currency deposits under the Liberalised Remittance Scheme (LRS).

RBI[1] claims that advertisements made by the banks do not always give proper disclosure about the schemes to the probable depositors. This results in concerns related to the interests of the depositors being jeopardized.

RBI believes that there is no supervisory control over the foreign entities who are offering schemes in India related to foreign currency deposits but have no operational presence in India. In response to this RBI has come to the conclusion to seek the following approvals for any bank who wishes to offer Foreign Currency Deposits Schemes in India.

The banks who are offering Foreign Currency Deposits Schemes need to submit the application to the Chief-General Manager who is in charge of Department of Banking and Operations and Development at the Reserve Bank of India.

The motive of the government behind bringing this provision is that banking institutions or any other institutions who are soliciting foreign currency deposits from the public must ensure minimum disclosures so that interests of the depositors are not put in jeopardy. It is also incumbent upon the resident depositors to make the choice of selecting the scheme with utmost caution and after fully understanding the kind of associated risks that are involved with the given scheme.

The concept of Special Notice could be traced in line to the provisions of Section 255 of the p...

Absence of Chairperson of Audit Com...

Section 177 of the Companies Act, 2013 deals with the formation and appointment of chairperson...