All you need to know about NBFC Takeover 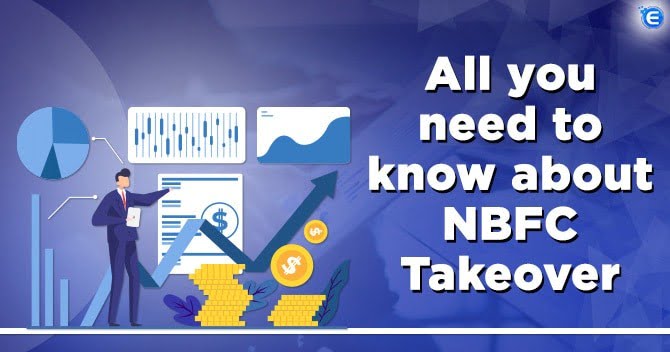 The takeover of NBFC (Non-Banking Financial Company) means the purchase of NBFC by another company. The takeover can only be undertaken if both the target and the acquirer are registered under the Companies Act.

How did the emergence of NBFC Takeover come about?

In the recent past, mergers and takeovers have become more usual than before. It has played a pivotal role in the expansion of the business. The efficiency of the takeover process made the RBI emphasize on the incorporation of the takeover of NBFCs.

What are the types of NBFC takeover?

There are two types of acquiring a target company-

A friendly takeover is based on mutual consent between companies. During this form of acquisition, the acquirer company offers the target company to be acquired, and the latter willingly accepts the offer.

In case of a hostile takeover, an acquiring company looks to purchase the target company secretly. This form of takeover happens when an entity attempts to take control of the firm without the consent or co-operation of the target company’s board of directors.

Points to remember before taking over an NBFC

Before you opt for the takeover of NBFC, the following points must be considered:

Before you purchase a company, conduct extensive research, and do background verification. A checklist must be made of the aspects which require to be analyzed. Make corporate goals and consider whether the target company would be able to meet the goals.

An acquirer must check the list of befitting candidates for takeover before offering acquisition to any company. During the process, a company shall shortlist the candidate who is fit to their business and suffices the central objective of the acquirer.

You must carefully evaluate the financial reputation of the company that you want to acquire. Calculate the maximum amount payable for takeover, cash flows, and finalize the best mode to finance the takeover.

What are the benefits of takeover of NBFCs?

The takeover of NBFCs has the following benefits:

The Reserve Bank of India has laid down the following norms which must be followed by NBFCs:

The RBI’s approval is not required when:

Application and the relevant documents to obtain RBI approval

In case where prior approval is required from the RBI, the following details must be included in your application:

The second step involves entering into a formal agreement with the target company to purchase share/transfer of management/ transfer of shares or such interest for NBFC takeover.

When the company comes close to complete 30 days of entering into the stated agreement, a second public notice is to be published. Just like the first notice, the second notice also must be in two regional languages. One in English and the other in vernacular language.

When the scheme is approved by the RBI without any objections, the transfer of assets will take place.

As stated earlier, the NBFC takeover is a method of expanding your business. The RBI has taken steps to simplify its takeover procedure, and the takeover of NBFC is now simpler than the registration of a new NBFC. Considering the role that NBFCs play in the financial market today, the Reserve Bank has liberalized the compliances and the governance requirements for the process.

Procedure for Applying for NBFC Lic...

NBFC has a phenomenal role to play in the Indian economy to have a sound source of funding. Sha...

What is Private Banking and Wealth...

The Kerala High Court made a ruling that even if an entity’s NBFC license has been stripped,...