Where does India Stand in Digital Payments /Banking: Strengths and Weakness 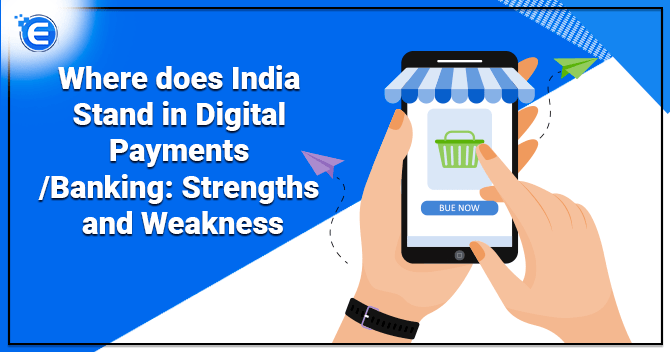 With the onset of UPI, the number of people using digital payments has increased tremendously. Although India has a long way to go in this area, its growth is only next to China. Today, China leads other countries in digital payments, and India has been an able follower. In this article, we shall discuss India’s stand in Digital payments/banking.

Of all the Fintech innovation that has come out of India, one of the biggest has been RBI regulated Unified Payments Interface[1]. It was piloted in April 2016. UPI enables users to transfer money instantly between two banks over a mobile phone. It gained relevance in November 2016, when India declared demonetization of high value currency notes.

In the aftermath of pandemic and social distancing, UPI has soared further high. In the month of September, this payment method made nearly a quarter of the value of all retail digital transactions. The infrastructure of UPI is characterised by P2P transactions and real time inter bank settlements. Its progress had a knock on effect on companies in India. Moreover, increased smartphone ownership, lower transaction costs, and improved user experience are some of the elements that are spurring new business models in Fintech.

India surge in the global list of most promising fintech companies

India ranks 3rd when it comes to the global list of most promising fintech companies. In the year 2018, the Bank for International Settlements ranked India 7th among 24 countries where it tracks digital payments. Close to 67 million payments were processed per day in India that year- around 1/8th of Chine and 1/7th of the US. This gave an eight fold growth in only six years, and only China had a better rate of growth.

However, India has a long way to go in financial inclusion. In 2018, the last year for which BIS data was available, it was ranked last in terms of per capita penetration and use frequency, which was less than half of Saudi Arabia and Mexico. In India digital mode of payments has definitely gone up, but it trails by a long margin to countries like China, Singapore, and the United States.

Strengths and Weakness of Digital Payments/Banking in India

There are certain strengths and weaknesses that can make or break the case for India going forward. With the amount of people starting to use digital mode for banking and payments, India needs to further strengthen its strengths and also can’t afford to overlook the weaknesses.

In this segment, we shall look at both of them. Let’s begin with Strengths.

With UPI and other modes digital mode of payment, it allows customers to make transactions easily and conveniently without even going out from the comfort of their homes.  With a mobile phone and internet connectivity, one can easily make bank transactions.

With the increased convenience, anytime and anywhere banking, the number of customers has increased tremendously. In the digital mode of banking, record of each transaction is maintained electronically, which allows to generate reports and analyze data at any moment.

The operating costs for banks have been reduced, and now banks charge lower fees for services and also provide high interest rate for deposits.

With digital banking, customers have the option to receive their account statements online thereby reducing the usage of paper. Banks in India are beginning to go paperless thus being environment friendly.

As the amount of digital payments and banking increased during Covid-19, the number of frauds also increased tremendously. This is one of the prime reasons why many Indians shy away from digital banking. There is a need for fool proof security, and people should be assured of safety beforehand.

Conservative Indian customers deposit their hard earned money in bank accounts. They have a constant fear of falling into online scams therefore, they refrain from digital mode of banking. This is an area where banks should improve.

Is India one of the fastest growing markets in digital payments?

With constant new innovations, India is leapfrogging the credit and debit card digital payments system. The figures by World Bank suggest that only 33% of the Indian population owns a debit card who are above 15 years of age. This is no where close to the percentage in other Asian countries.

India is doing well in the digital payment market but on a smaller base. With payments now possible even without a smartphone using USSD 2.0, the UPI and digital payment story is expected to go north in India. This will open new possibilities in Fintech and beyond.

As Fintechs and financial institutions are innovating across the globe to make payments methods faster, what is more crucial is the safety of these digital payments. Therefore, what will determine the success of such payments option is how safe they are. This goes for India as well.

Read our article:Pandemic leading to an era of secure and convenient Digital Banking

How can Pension Payment Orders (PPO...

The pension payment order granted to the Central Governments’ pensioners can be stored in Dig...

In the banking industry, customers are the epitome who cause business disruption, and financial...

Chatbots in Banking: How can it imp...

In order to meet the growing and evolving customer demands and expectations, banks have been in...