Video KYC Vs eKYC: What are the Key Differences? 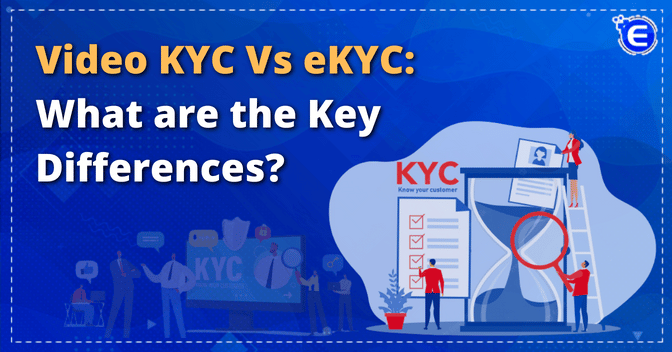 Digitalisation has led to the transformation of several industries, and the NBFCs and other financial institutions are no exception. The Covid pandemic has aggravated the need for minimal or no contact between customers and the financial institution to ensure everyone’s safety.

Video KYC gained recognition in 2020 due to the notification released by the Reserve Bank of India permitting the use of Video KYC for customer verification. This led to a dilemma between customers and financial institutions regarding the choice of opting for Video KYC or E- KYC

What is Video KYC Vs eKYC

Video KYC refers to an automated and video-based customer due diligence process. The verification takes place through a video call assisted by a KYC agent. It is a two-stage process which includes a video call and a review. The first stage involves the capturing of photographs and other relevant documents by the customer through a live video call with the help of a KYC agent, which the other representatives review in the second stage of the verification process to check the authenticity and accuracy of the submitted documents for approval or rejection of the KYC of the customer.

E- KYC, often termed as paperless KYC, refer to the process of verification of the credentials of a customer through electronic mode wherein the verification takes place through the service provider, which can access the details of the Aadhaar Card of the customer from the Unique Identification Authority of India (UIDAI) database.

What are the Key Differences in Video KYC VS E KYC

Although e- KYC reduces the hassles of the physical KYC, various issues are related to the eKYC, such as:

Inaccuracy in the Data provided by the Customer

The purpose of eKYC is to ensure that the customer would use the particular account to access financial services for which they must provide the phone no. and email ids with the application. The issue, in this case, is that the applicants often provide the inactive id and phone no, which hinders the eKYC process. The Video KYC process enables the officers to cross-check such credentials during the video call, which can effectively curb the issue of inadequate data of the customers.

Inability to detect the liveliness of the applicant

One of the major issues with eKYC is the inability to check the liveliness of the applicant, as most of the information is supplied through the documents provided on the online portal. This often leads to identity theft because the customers often upload the documents of a fake or deceased person to get the KYC verification in such a name, which can be highly misused.  This issue can be easily dealt with video KYC making video KYC a good option between eKYC Vs Video KYC

Submission of Forged Documents by the Applicant

Another issue with eKyc  when comparing between eKYC Vs Video KYC is the submission of forged documents by the applicants, where the applicants upload fake documents on the website to pass the verification process. However, video KYC tackles this issue as it allows the officer to direct the applicant to display the documents during the video call to check the document’s authenticity.

Often some imposters used to disguise themselves as an officer of the KYC department to misuse the information provided by the applicant for some fraudulent gain. This issue can be prevented with the help of video KYC as the applicant can have a face-to-face conversation with the officer and even demand the officer’s identity card during the video KYC process.

Video KYC was introduced through the notification dated 09.01.2020 by the Reserve Bank of India, which amended the PMLA or Prevention of Money Laundering Act 2002[1], where the authority permits all NBFC and Fintech start-ups to opt for Video KYC as a method of customer identification.

The eligibility criteria for Video KYC are enumerated below –

The documents required for

Guidelines of Reserve Bank of India regarding Video KYC

The Reserve Bank of India has provided the following guidelines for the Video KYC.

The following procedure is required to be followed to successfully complete Video KYC.

Therefore, another difference between eKYC and Video KYC is the process of the two KYCs

Why is Video KYC the Best Solution for NBFC?

Video KYC enables the completion of the KYC process in a single video discussion in a few hours. NBFCs can leverage it to on-board the customers much more quickly, which implies that financial services like loans, credit cards, and other banks or other services provided by the NBFCs can further be disbursed faster.

This makes it a better option between eKYC Vs Video KYC

Using video KYC to complete KYC applications eliminates the need for the customer or NBFC agent to travel and reach the customer to carry out the onboarding procedure. It also helps avoids the need for physical document authentication and processing, thereby making it less expensive, resulting in a lower customer acquisition cost by the NBFCs which is another benefit between eKYC Vs Video KYC

Another  advantage of Video KYC,  while discussing eKYC Vs Video KYC is that it , reduces customer drop-offs due to its real-time contact between the consumer and the agent. Fewer drops lead to better time management, facilitating a smooth completion of the Video KYC process.

Mitigation of risk is a huge commercial advantage that video KYC adoption provides to the NBFCs Video KYC allows the NBFCs have complete control over the authentication process, which helps avoid fraud risks making it a great alternative between eKYC Vs Video KYC

The customers opt for Video KYC among  eKYC Vs Video KYC  as allows the customers to get a contactless KYC procedure which was a crucial aspect, especially during the Covid pandemic. This contactless verification, along with the digitalisation of the whole process, has enhanced the customer experience, which provides an added advantage to the NBFCs.

Serving to the Requirements of the Industry

Video KYC is a brilliant alternative for small banking and financial services that cater to a niche market as it’s incredibly cost-effective. Video KYC helps grow these companies and the NBFCs, broadening the financial services ecosystem which makes the  institutions opt for video KYVC when deciding between eKYC Vs Video KYC

NBFCs are bound to store all the customer KYC data obtained through video KYC conversations on their servers. Compared to other e-KYC  Vs Video KYC techniques, the customer data is secured, as all the user data will be stored at the NBFC, eliminating the intermediary throughout the KYC procedure.

The Video KYC is gaining acceptance in the NBFC sector due to its cost-effectiveness and easy onboarding process, catering to an increased customer base for the NBFCs. The aspect of contactless verification through Video KYC has encouraged numerous people to reach out to NBFC for loans and other financial assistance. In addition to this video, KYC has immensely contributed to the accuracy of customer due diligence, which prevents the issue of money laundering and other numerous financial frauds and crimes, providing relief to the NBFCs, which can be an essential determinant while deciding between EKYC and Video KYC.

Read our Article: RBI Initiates Video Based KYC as an Alternative to already present E-KYC Facility

Mandatory filing of APR for investm...

The Foreign Exchange and Management Act, 1999 (FEMA) has made mandatory filing of APR or Annual...

P2P lending refers to Peer-to-Peer lending or crowd-lending. It is a new form of lending money...

In a recent notification released by the Reserve Bank of India (RBI), it has decided to impleme...