Things to Know Before Subscribing to IRFC IPO 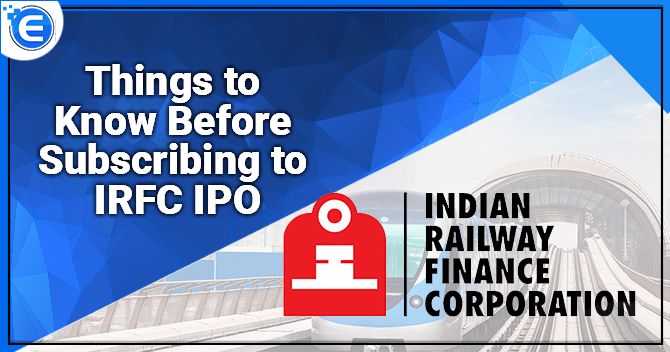 This article envisages about the things to know before subscribing to IRFC IPO. The word IRFC IPO stands for the Indian Railway Finance Corporation- Initial Public Offer. IRFC is the dedicated market borrowing of the Indian Railways, and is offering up to 178.2 Crore shares with the face value of Rs.10 each.

It comprises the new Issue of up to 118.8 Crores shares and offers for sale up to 59.4 Crores Equity Shares by the Government of India[1]. This has come to the public because the Initial Public Offer was announced on 18th January 2021. The importance of this IPO rises due to them because of the price offered for shares. This will improve the government sector as a whole.

What is the IRFC IPO?

Through acquisition of the assets and leased to the Railways, IRFC gets some form of benefits related to depreciation of assets. It is a kind of risk-free business model as there are lease receivables from the MoR (Monthly Operating Receivables) which are considered by the Union Budget. The Lease rentals are earmarked in the Budget assuring Revenue to IRFC.

It is interesting to note that IRFC is a whole government-owned PSU under Ministry of Railways. IRFC is involved in the financing acquisition of rolling stock assets, leasing railway infrastructure, and funding to entities under MoR. It has financed several projects of the Indian Railways and is instrumental in the development of Indian Railways.

The Union Government approved the IPO listing of the five railways companies in which IRFC has been included.

Indian Railways is a huge company, and with so many passengers travelling every day. It is the largest network in Asia. However the problem persists in transportation and the use age is low. To 15 Lakhs Crore has been awarded to improve the infrastructure of railways. Here, IRFC is the rolling asset provider to railways.

The governance and functioning of the IRFC IPO:

This brings a massive opportunity with the introduction of IRFC IPO, after showing the intrinsic value of the IRFC of his investments in the company.

The positive factor of IRFC IPO

The IRFC plays a crucial role in financing the projects of the Indian Railways since it is the dedicated borrowing arm.

IRFC offers a competitive cost of borrowing as it has the diversified source of funding.

The credibility and Goodwill of IRFC are much better, and it has the most substantial credit rating.

The IRFC has a cost-effective agreement with Indian Railways, generating the steady Revenue for Railways.

The business model of the IRFC is of low risk, due to the nature of the agreement with MoR.

It helps to ensure the least mismatch between the assets & liabilities as it follows the asset management strategy.

IRFC has sound lending, structure finance and law with exposure to the Private and Government sectors.

The Objective of the Issue

The prime objective of the IRFC IPO:

Why should IRFC IPO be subscribed?

The subscription of the IRFC IPO should be done because:

It can be concluded that before investing in the IRFC IPO, it is essential to understand that IPO support for any company is significant for its future growth and development. The IPO creates a positive impact on the mind of the investor. The advantages of the IRFC IPO are that due to its unique business model, and reliance on the Indian Railway profits, there are fewer chances of its fall. The company runs a risk-free business model, despite railways having a long term debt. IRFC is India’s first NBFC to get it listed. The dependence of Indian Railways to expand its reach and infrastructure shows the scope of revenue generation for IRFC. Even if the government changes its policies of MoR, then also the IRFC is earning profits.

Investment in IPOs through Mutual F...

The Securities & Exchange Board of India proposed to tighten the rules governing IPOs with...

All about Initial Public Offerings...

You would have come across this news lately that an Indian start-up turned unicorn and went ahe...