The Concept of Valuation by Registered Valuers Under IBBI 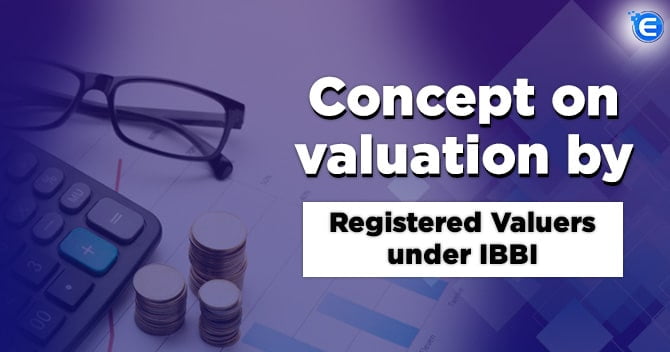 While looking into the past scenario into the business domain, there has been no shortage or sheer need of accounting guidance; the only thing that we are missing out on is fair valuation and valuation guidelines. To amend the past happening mistakes, IBBI has been in the forefront to fight the battle of fair valuation. It is discussed in detail about the role of IBBI in the further paragraphs and about what is “registered valuers.”

The concept of registered valuers is inscribed under section 247 of the Indian Companies Act, 2013. Its main agenda is to regulate the practice of valuation In India and to also bring it to match the International standards in terms of valuation. However, we shall confront this term Registration many times especially during transactions like Fund Raising, Mergers & Acquisitions, sale of a business, strategic business decisions, shareholders disputes, and voluntary value assessment and also for regulatory compliance, tax and financial reporting purposes in India under RBI, Income Tax, Companies Act, SEBI Laws, etc. The valuation of a listed company whose share is actively traded on a nationwide stock exchange can be derived from its prevailing market price over a period of time.

However, the real challenge lies in the valuation of an unlisted company. From 1st February 2019, onwards none other than IBBI, “Registered valuer” is authorized to conduct valuations under the applicable provisions present in the Companies Act, 2013. In the case of SEBI, the Registered Merchant Banker is authorized to undertake valuation by the Discounted Cash Flow method.

The process of valuation is indeed a complex situation, and hence it involves multiple steps and procedures, the foremost thing to be taken into consideration before discussing it in detail. Understand the whole agenda of valuation and its underlying process, proper analysis of the valuation will, in turn, assist the valuer in applying, evaluating and calculating the appropriate valuation approaches and method in accomplishing the aforesaid agenda.

However, this is required to be kept under consideration that valuation is usually done at a particular point in time. The date of valuation is that a specific date where valuer estimates the value of the subject interest and thereby draws the conclusion with its estimated value. Since relative valuation is heavily dependent upon so many external factors hence the date of valuation plays a major role in this regard.

Though the concept of Valuation is an old school concept, yet there has been no formal introduction of this concept in this competing world, which means that there is no formal Registration of valuers with any central authorities. This, in turn, brought a lack of uniformity in the process. In the past, owing to the lack of Indian valuation standards and techniques, most of the professionals associated with it adopted international norms. However, few valuers did try to flout the ethical standards of valuation because of which the Ministry of Corporate Affairs had to come up with Registered Valuers and Valuation Rules, 2017.

Valuation henceforth only by Registered Valuers

Moreover, it has been observed that in the past couple of years, shareholders have moved SEBI for not being remunerated with a fair price by promoters as part of the delisting or exit process. To illustrate this, in early 2017, the minority shareholders of Schneider Electric expressed a grudge with the exit price. Though the valuers registered on NSE and BSE follow the SEBI guidelines for arriving at the final offer price, their appointment is, however, influenced by the majority shareholders. To provide a solution for the above-stated issue, Registered Valuers and Valuation Rules, 2017, were enacted. According to the Registered Valuers & Valuation rules, 2017, valuers upon registration with a government notified authority could perform valuation (those including individuals, partnership entities, and companies) under the Companies Act. The gist of the rule is that valuers need to accept international standards of evaluation

Under the Insolvency code and Insolvency and bankruptcy board of India Regulations, 2016- registered valuer means a person registered as such in accordance with the Companies Act, 2013 and rules made thereunder. Similarly, under SEBI, valuation is required to be done only by Registered valuers registered with IBBI.

The Ministry of Corporate Affairs on 23rd October 2017 via notification has specified IBBI as the responsible authority in this regard since then IBBI became the regular administer and was thereby held to perform the functions of the Central Government. It can be concluded that IBBI has all the worldly powers to regulate the valuation domain both under Companies and IBC.

However, there are certain qualifications for registered valuer, which are as follows:

Talking about the impact on this practice of valuation this practice of valuation is predominantly done by merchant bankers and chartered accountant who issue valuation certificates in compliance with Companies act 2013, SEBI Regulations, and Income-tax Act. Such Merchant Bankers and Chartered Accountant needs to get themselves enrolled as registered valuer if they intend to carry out valuation practice. All those companies and partnership firms that are providing valuation services also are required to reconstitute in order to fulfill the eligibility criteria matching the RV rules. This is also to bring under notice that a Registered valuer can either be an individual or an entity. In case of Partnership, it can be deemed to be a registered valuer if all its partners are registered valuer with IBBI.

Cancellation and suspension of registration

IBBI, as an authority, can suspend or cancel the registration of a valuer in case of violation of any provisions in the Act or any other law or rules or any conditions of the registration.  The officer in authority nominated by IBBI can conduct an investigation before taking any necessary action, shall call upon the registered valuer to show cause, and would provide proper opportunity to present himself and let him avail all the possible opportunities.  The officer on duty has to dispose of the case after showing causes while adhering to principles of natural justice (Fair trial and no person to judge his own case) and pronounce a reasoned order.  The officer is also authorized to issue a warning notice instead of suspension or cancellation.  The particular order becomes effective, 30 days after it is passed, and this order is appealable to the authority, IBBI. A registered valuer’s work will become sought after in every company while at the same time, the valuation itself becomes streamlined and regulated, bringing responsibility and accountability to every valuation.

Hence professionals/corporate / IPs have to ensure henceforth that the Valuation reports have to be obtained only from Registered Valuers. It can be noted that Registered Valuers means registered with IBBI. Hence while approaching Valuers, please check whether the proposed valuer has registration number allotted IBBI. If any person other than Registered Valuer issued a valuation report /certificate that will not be acceptable by respective authorities, an issuer might be liable for further disciplinary action.

However, the scope of the Registered Valuers and Valuations Act is only over the Companies Act, 2013, SEBI Regulation, and Insolvency Valuation Act. It is expected that the precise guidelines for registered valuer shall have positive effects on income tax, M&A, exit, and delisting valuation. This, in turn, is expected to ultimately protect the minority shareholders’ rights.

LLP: Firms can no Longer get away w...

Usually, whenever any application or document is required to be filed with the Central Governme...

Procedure for Change in object Clau...

The Memorandum of Association (MOA) of the Company consist the clauses like name Clause, Object...

Before getting into legal formalities of registration and licenses required for an E-Commerce b...