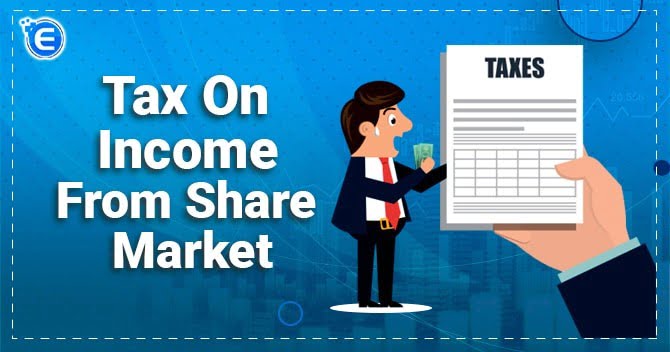 Almost everyone is aware of the incidence of tax on the income earned from salary, rental income and income from business. But very few are aware of tax on income from share market. The income and loss of sale and purchase of shares is taxable under the head of ‘Capital Gains’.

The income under the head of ‘Capital Gains’ is further divided under the following heads:

The above mentioned classification is done according to the holding period of the shares. Holding Period refers to the duration of holding the shares from the date of acquisition till the time the shares are sold or transferred.

This piece of information is restricted to the scope of tax on shares such as listed bonds and debentures and listed equity shares on a recognised Indian stock exchange and also includes units of UTI and Zero coupon bonds.

Tax on income from shares

If the holder of listed equity shares sells the shares within a period of 12 months from the date of acquisition of shares, then the income earned by the holder is taxed under STCG and if he incurs a loss then it is incurred under Short-Term Capital Loss (STCL).

If the price at which the shares are sold is higher than the purchase price then the calculation of transaction will be treated as STCG.

The STCG are taxable at the rate of 15% irrespective of the tax slab of the assessee. This 15% of tax on STCG is a special tax.

If the holder of listed equity shares sells the shares after a period of 12 months from the date of acquisition of shares, then the income earned by the holder is taxed under LTCG and if he incurs a loss then it is incurred under Long-Term Capital Loss (LTCL).

Before the introduction of 2018 Finance Act, the LTCG on made by the holder on sale of equity shares or equity oriented units of mutual funds was exempted from tax. This means that before 2018 there was no tax on LTCG on equity investments.

However, after the Finance Act of 2018[1] took away the exemption. From then onwards LTCG made over a sum of 1 lakh rupees on sale of equity shares or equity oriented units of a mutual fund is liable to be taxed at the rate of 10% plus all the applicable cesses.

Tax on loss from shares

If the holder suffers from STCL after sale made on equity shares, then he can offset the loss against the STCG or LTCG made on any capital asset. Further, this loss can be carried forward for the next 8 years and can also be adjusted against STCG and LTCG made in the next 8 years as well.

It must be noted that an assessee will be able to make use of the above scheme is he files the income tax on time i.e. within the due date of filing ITR. This means that even if the income earned in a year is less than the taxable income, the assessee has to file ITR to carry the loss forward.

But this scenario changed after the 2018 Finance Act which allowed losses arising from LTCG will be allowed to be carried forward. It must also be remembered that the LTCL can be set off only against the LTCG and not against STCG.

Again the LTCL can be carried forward for the subsequent 8 years to be set off against the LTCG only. However, in order to claim this facility, the assessee must file income tax return within the due date.

There has been a long dispute whether to classify gains made from sale of shares as part of ‘income from business’ or ‘capital gains’.

Calculation of Tax on income from shares

When as assessee is able to show income from sale of shares under the head of ‘income from business and profession’, then that assessee can reduce his expenses incurred in earning such business income. The gains made on the sale of shares shall be added to the total income of assessee and charged under the tx slab rates.

On the other hand, if the assessee shows his gains made on sale of shares under the head of ‘Capital Gains’, then the expenses incurred on transfer will be allowed for deduction. LTCG made over Rupees 1 lakh annually will be taxable at 10% and the tax on income made from STCG shall be taxed at 15%.

Terming the prosecution malicious, the Madras High Court quashed the complaints filed by the In...

Consequences of Non-Filing of TCS R...

As per Income Tax Act, 1961, a person must file TCS return, failing which he will be penalized...