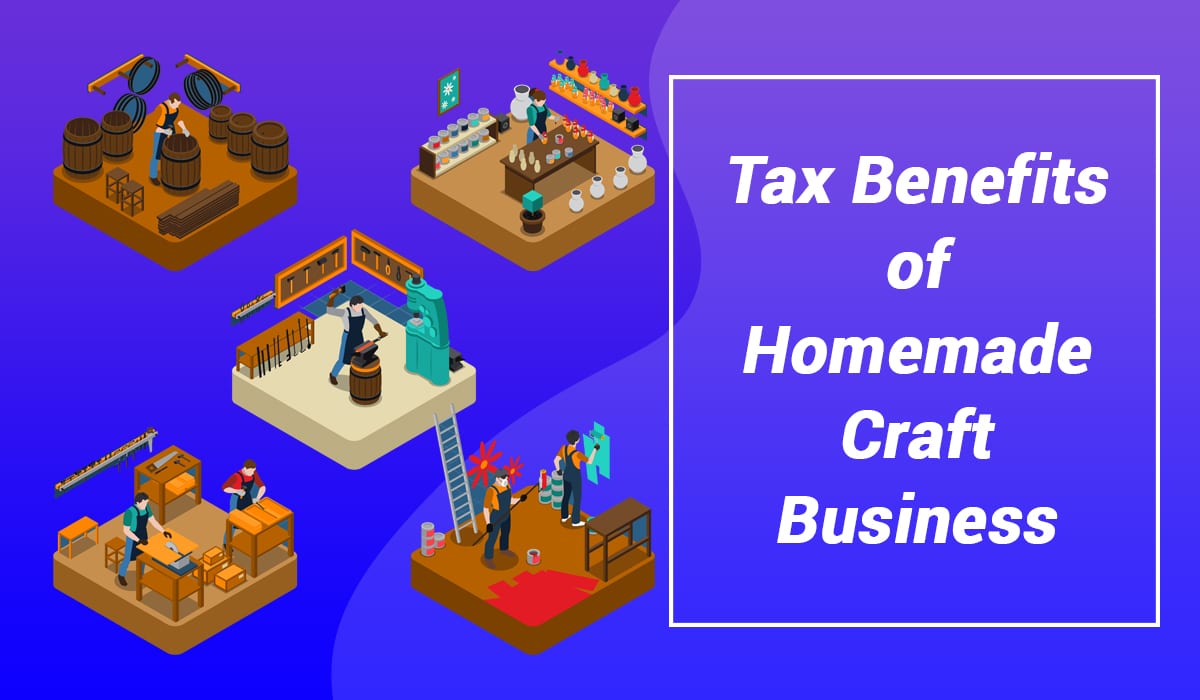 To understand the tax benefit for homemade or handicraft business firstly we have to understand what would come under the meaning of homemade craft. Homemade craft is also known as artisan, which means a type of work where useful and decorative devices are made completely by hand or using simple tools. This type of work is generally accomplished in the home or small area of craftsmen.  Also, this type of work generally requires certain type of skill or expertise in that field.

However many Courts have explained the meaning of handicraft business such as in Mysore Agarbathi Works Vs Union of India (1977) as “Handicrafts’ shall mean any manual labor exercised by way of trade or for purposes of gain in or incidental to the making of any article or part of an article, or in or incidental to the altering, repairing, ornamenting, finishing, or otherwise adapting for sale, any article.

Generally, handicraft business is done on small scale with few labor mostly family members and they have specialized skill in the art which they acquired from their ancestors. They in a way represent the rich culture and heritage of our nation to the world and also generate employment in the society and help the economy to grow. Therefore, government tries to promote it nationally as well as internationally.

What all Tax Benefit is given to Handicraft?

As, we all know that we have Parliamentary form of democracy both at Center and State level. Therefore, tax benefit is provided both by Center Government and State Government to the homemade craft business.

To understand it better let us divide it into two parts:

Under the old system before GST act, handicraft was not taxable in 15 out of 29 states. However, some tax used to be levied @ 5 % in remaining states.  Also, service tax were also charged when some services is received by craftsmen for production of goods.

Also, most of homemade craft were kept under Schedule I which is exemption list under the model VAT law.

To understand tax benefit post GST we are dividing this into two parts:

Any export of homemade goods shall be ‘zero rated supply’  which means that no tax need to be paid at the time of exports but credit of the input tax related to that supply will be admissible. This regulation is been made since homemade items should be freely exported in accordance of world trade organization.

Under the IGST law, exporter of handicraft has two options to either pay IGST at the time of export or export the goods without payment of taxes (zero-rated supplies). In the first scenario, the refund of the taxes paid will be available to the exporters and in the second scenario, the refund of the tax paid on the inputs or used in the production of handicraft goods exported out of India.

The Government of India has introduced Exports from India Scheme through the Foreign Trade Policy 2015- 2020. Over 35 handicraft products such as candles, paper and clay articles would be entitled for export benefits under the scheme. Under this scheme, the government provides duty credit scrip to exporters. The rate varies from product to product and the export destination, as envisaged in the foreign trade policy. Some Merchandise Exports from India Scheme entries under handicraft sector are included for enhanced benefits under MEIS for the export.

Under the new system, the legislature sorted most of the handicrafts items under the slab of 2.5 % to 6 % of GST rate. Also, the benefit is also enjoyed by craftsmen due to reduction in double jeopardy i.e. double taxation of goods both at center and state level in GST system. For example – Handcrafted candles are taxed @ 6 % under code 3406, Bangles, beads and small ware is taxed @ 2.5% etc.

For example : return is not required to be made so frequently , formalities as well as rules and regulations are also relaxed for homemade industries.

Compliances for Change of Company N...

There may be circumstances in which one has to change the name of the corporation or LLC name o...

An audit is an independent and systematic process for examination of accounts, books...

All about TDS Liability (Section 19...

The Union Budget 2020 presented by the Finance Minister has reduced the threshold limit for TDS...